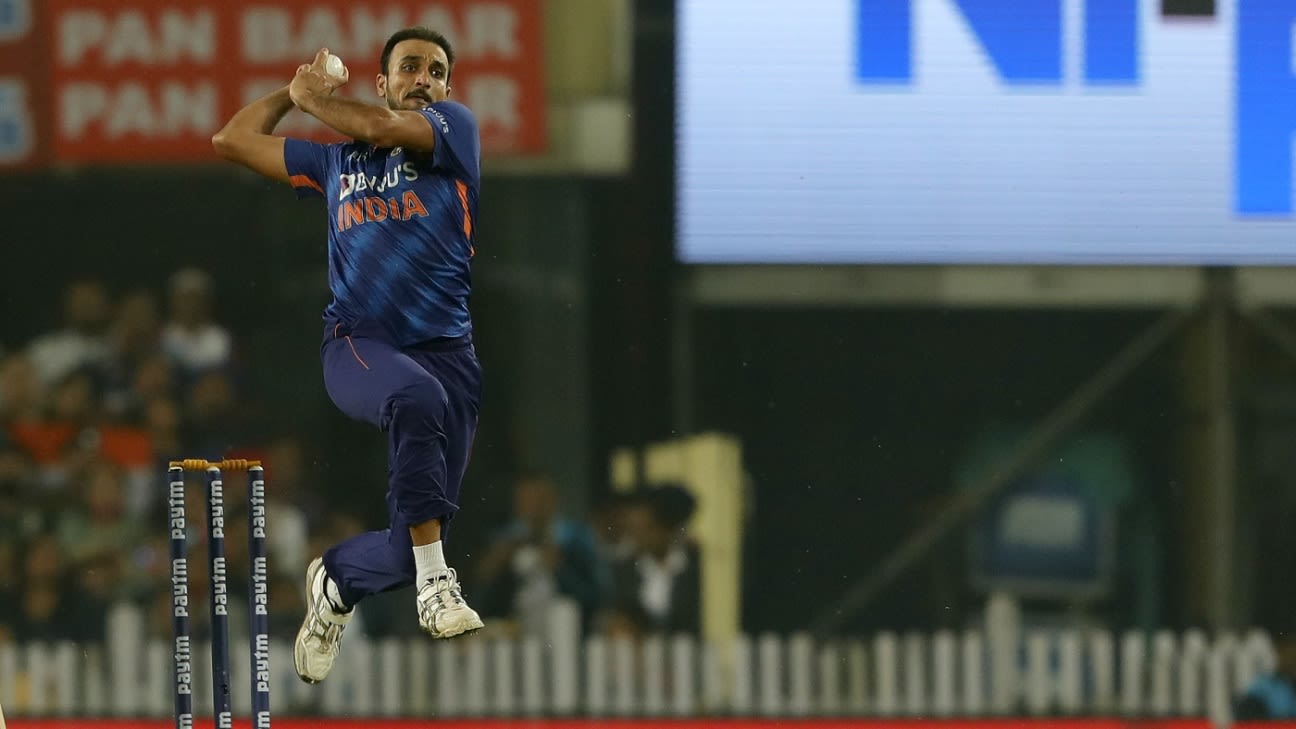 Harshal Patel doesn’t think he’s very talented. His study of his bowling action has led him to conclude it’s biomechanically imperfect: he has “massive lateral flex at the point of delivery” which means the height from which he bowls – and consequently the bounce he could get – is reduced. The action is a greater risk of injuries too. He also admits that although he’s a ‘fast’ bowler, he can’t really bowl over 140kph regularly.
And despite that self-aware assessment of his skills, Harshal has just come off a season where he topped the wicket charts in IPL 2021 and won the Most Valuable Player award, then rocked up to his first international outing by becoming the eighth player to win the Player of the Match award on T20I debut for India.

What Harshal lacks in more visible skill, he adds in subtlety. What he lacks in pace, he makes up for with patience. Where there is no dazzle, he has an industriousness that has allowed him to maximise his craft. And he’s brought a self-aware, thinking mind behind it all. The skill has brought 446 wickets in 238 senior-level matches across formats. Patience has meant that he could reap the rewards of top-level cricket in 2021, having made his senior debut in 2009. The industry and thinking mind strengthen the belief that there’s more good days to come.

“Somebody like me, who was not exceptionally talented, I had to build my game from ground up,” Harshal told host broadcaster Star after winning the match award on debut.

“For me it was the ability to differentiate between my skillset and the things that I could not do, things that my skillset or talent wouldn’t allow me to do… You need to keep working on that and make it so good that even with limited skill or limited options, you can make it work and consistently execute that.”

Every top-level athlete knows what their limitations are, but few acknowledge it as openly as Harshal did. He could do that because for Harshal, the lack of pace, imperfect action or non-explosiveness are incidental. What’s not there is not there, he’s figured out a way to work with what he has.

What do you do if you can’t blast batters out with pace? You develop canniness and consistency.

Harshal has two slower balls, the off-cutter and one from the back of the hand. He worked on his yorker till he could deploy it in high-pressure situations confidently when he was told he would be bowling at the death for Royal Challengers Bangalore. He can bowl from close to the stumps or wide of the crease, over and around the wicket. In his game-turning 4-0-25-2 in the second T20I against New Zealand, each of his two wickets were ratified only after the umpires checked for a back-foot no-ball – so wide of the crease was Harshal going. Both times, he was completely safe.

Heavy dew meant Harshal couldn’t rely on the yorker – the slower one that looped deceptively or the pacier one. He found that out the costly way, getting hit for six and then bowling a full-toss above waist height. He adjusted by bowling cutters into the pitch, varying his pace and angles expertly.

“The margin of error as it is, is lesser on those deliveries, and when the ball is wet you can’t grip the ball so it becomes even tougher,” Harshal said. “I tried to bowl one slower yorker which went for a six because it turned into a full-toss. Then I tried a pacy yorker which turned out to be a beamer. After that I realised that this is probably not going to work in these conditions. Obviously it was difficult. Two of my main weapons in the death overs were gone for today. But at the same time, I knew how to adapt to the situation. It was a bit of a double-paced wicket with variable bounce. I wanted batters to hit to the square boundaries, and that strategy worked.”

He also has an understanding of angles – an even more prolific domestic stalwart Jaydev Unadkat is similar – that lets him lucidly explain how he uses them.

“I think that’s another thing I realised that I can add to my repertoire without trying to do too many different things. So I bowl yorkers from close to the stumps, and from the corner of the crease. That has a massive impact on where the ball lands and where the batsman plays the ball. It’s a massive advantage and a massive weapon for me.”

When it was put to him that patience and consistency are as much part of the ‘talent’ skillset as anything else, Harshal agreed.

“Mindset, being able to decipher wheat from chaff, is in itself a skill, is in itself a talent. It’s something that I won’t say was innate in me, but I learned through experiences,” Harshal said. “I was not born with it. I was a very impetuous, very impatient person growing up. Life sort of teaches you these things if you don’t know them… That is something that my process of ten years in domestic cricket has taught me. All the failures I’ve had through these ten years have taught me that you need to be patient.

“People don’t talk enough about patience. I feel progress doesn’t happen overnight. It’s a slow process, a gradual process. If you want to make a change, if you want to get better at something, you need to allow yourself enough time to sort of figure that out, how you are going to do that. If you keep jumping from one place to another in your mindset, that’s not going to work for you.”

The process of gradual learning also meant he converted a perceived weakness – his less-than-biomechanically-perfect-action and his less-than-top-notch-speed – into strengths.

“I will never be able to bowl consistently at higher than 140. That’s something I realised and I started working on other things, other skills that I needed to do well at this level.”

“I always wanted to correct that, because we are told that you are more injury prone if you don’t correct that,” Harshal said of the lateral flex in his bowling action. “Also the height of your delivery gets reduced if you have a lateral flexion and you won’t get a lot of bounce and all those things. But what I realised after playing 7-8 years of domestic cricket is, that lateral flexion gave me an angle which was difficult for batters to line up to. That made my slower balls more effective. If I talk about red-ball cricket, that big angle into the batsman allows me to bowl outswingers from a very tight line and beat the batters when it straightens. So I started looking at that as an advantage.

“Obviously, being a fast bowler you want to bowl fast. But then I realised my speed ceiling is probably 135kph. If I’m bowling really well, in very good rhythm, I can probably clock close to 140kph. But I will never be able to bowl consistently at higher than 140. That’s something I realised and I started working on other things, other skills that I needed to do well at this level.”

With his IPL 2021 season, Harshal was always going to be around top-flight cricket in the recent future. His international debut has only cemented that. But he’s not going to sit back and admire his laurels yet, simply because that is not what he was aiming for.

“I don’t feel that this is the ultimate thing that I was striving for,” Harshal said. “What I was actually striving for was to actualise my own potential. I knew that I could play at the highest level, I could do well at the highest level with ball and with the bat as well. So my process was always driven by my internal drive to constantly get better and actualise that potential.

“So I never, at any moment (during his years in domestic cricket), felt that the dream is running away from me. I always felt that if you put in the work, if you are patient, if you make good decisions where you can sleep well at night – then things are eventually going to go in your favour. I’m someone who looks at things long-term. I feel if you look at things in a very short frame of time you do get frustrated, but if you look at long-term success and long-term goals and processes, you are less likely to get frustrated and think that ‘this dream is escaping from me’.”