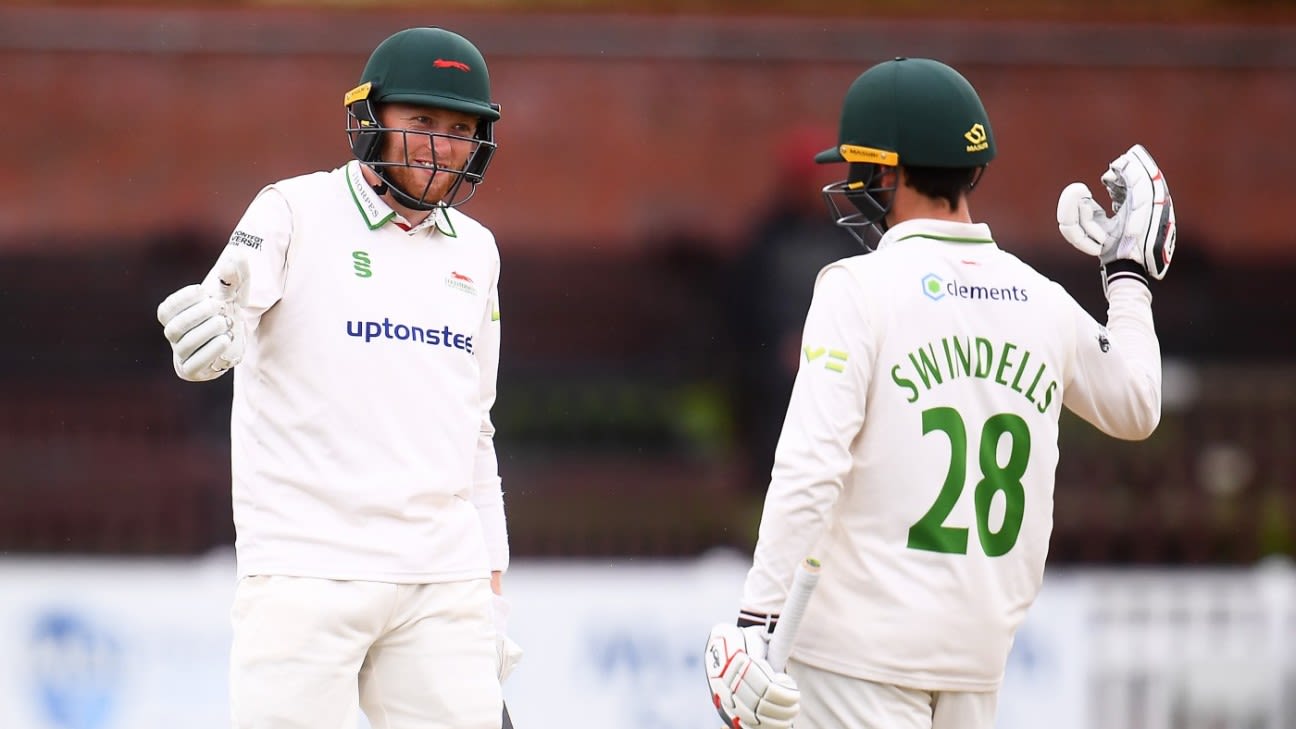 Swindells shares 200 stand with Ed Barnes, unbeaten on 83, before weather closes in

Harry Swindells advanced his career-best first-class score to 171 not out as Leicestershire’s LV= Insurance County Championship match with Somerset at Taunton ended in a high-scoring draw.

The 22-year-old wicketkeeper had batted for almost six and a half hours, facing 322 balls and striking 24 fours and a six, when heavy rain set in during the lunch interval on the final day, causing play to be abandoned.

By then Swindells and Ed Barnes had taken their unbroken eighth-wicket stand to 203, with 23-year-old Barnes on 83, also a career-best, an innings spanning 165 balls and featuring 14 boundaries.

It was a Leicestershire record partnership for the eighth-wicket, surpassing the 195 between Jigar Naik and James Taylor against Derbyshire in 2005.

Leicestershire head coach Paul Nixon described Swindells as “a streetfighter and a workaholic”.

“He has been so proactive in trying to improve his game and relishes a battle,” Nixon said. “Ed has had a tough time. We left him out for a while and here he fought with his bowling action a bit in the breeze against some very good players before turning things around with the bat.”

The pair batted through the morning session, interrupted for around 15 minutes by a shower, adding 85 to their team’s overnight first-innings score of 390 for 7.

Their combined efforts gave Leicestershire a lead of 14 runs, but the match already seemed destined for a draw long before the heavens opened.

Somerset’s experienced seamers Marchant de Lange and Jack Brooks had one final opportunity to give their side a meaningful first-innings advantage when play began with the visitors 71 in arrears.

But a benign pitch, which had frustrated a depleted home attack the previous day, proved equally true for batting and there were few alarms for the composed Swindells and Barnes.

Unbeaten on 119 overnight, Swindells moved to 150 off 289 balls, playing and missing on occasion, as he had done throughout his innings, but also displaying the ability to punish anything loose to the full.

Barnard matched his partner shot for shot as they took the score to 444 for 7 before a brief rain break.

Debutant Kasey Aldridge again bowled without a modicum of fortune, failing to find an edge, despite some impressive deliveries from the Marcus Trescothick Pavilion End.

Acting Somerset skipper James Hildreth introduced left-arm spinner Lewis Goldsworthy into the attack for the first time in the 134th over, but he was able to find no greater assistance from the pitch than the seamers.

Andy Hurry, Somerset’s director of cricket, bemoaned the loss of leading seamer Craig Overton to England duty as part of wholesale changes to the ODI squad to face Pakistan following a spate of positive Covid tests among the original squad and staff.

“There is no doubt that if Craig Overton had been with us for the whole game, we would be looking at a different outcome,” Hurry said. “That’s frustrating, but we fully understand the rationale behind England calling him up and it is a great opportunity for him.

“It also provided chance for young Kasey Aldridge, who bowled with absolutely no luck. We go into the final game top of the table, which is fantastic, and it promises to be a really exciting climax to the group stage as we take on Surrey next week.”

Swindells and Barnes looked as if they could bat all day and the latter may feel he was robbed of a maiden century by the weather. Regardless, he and Swindells played with an assurance and level of concentration that bodes well for their futures.

Covid’s grip shows in disappointing jobs data, but there are signs...

An atomic clock that could revolutionize space travel just passed its...