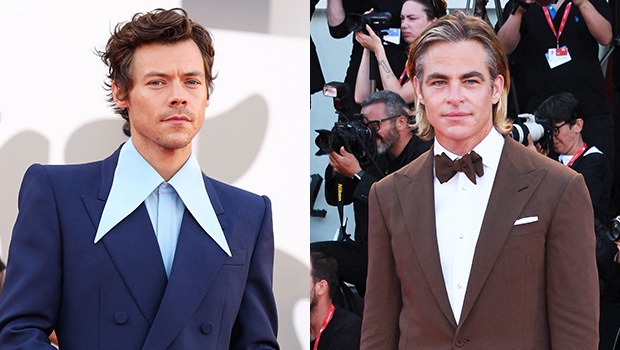 Months after the alleged expectorant exchange between Harry Styles and Chris Pine, the Don’t Worry Darling co-stars put to rest any talk about a gob-based beef after meeting up in São Paulo, Brazil, on Dec. 5, according to a Harry Styles fan account. In the photos posted to social media, Harry, 28, and Chris, 42, were all smiles as they gave each other a friendly hug before chatting briefly. The “As It Was” singer dressed in black and sported a top knot, while Chris looked comfy in a white t-shirt and a full beard.

The “spit-gate” drama began in September during the Don’t Worry Darling Venice Film Festival premiere. A viral video seemingly showed Harry spitting on Chris’s lap. As Harry walks over to sit next to his co-star, he seemingly pauses before sitting down. Chris looks at this lap, stops clapping, and has a bemused look on his face. The angle of the video didn’t show Chris’s lap, but many were left wondering: did Harry spit on Chris?

Apparently, no. “This is a ridiculous story — a complete fabrication and the result of an odd online illusion that is clearly deceiving and allows for foolish speculation,” a rep for Chris told PEOPLE. “Just to be clear, Harry Styles did not spit on Chris Pine. There is nothing but respect between these two men and any suggestion otherwise is a blatant attempt to create drama that simply does not exist.”

Harry would joke about the alleged incident during his Sept. 7 show at Madison Square Garden. The Venice premiere took place during Harry’s residency at MSG, and while on stage, he told the crowd, “It’s wonderful, wonderful, wonderful to be back in New York. I just popped very quickly to Venice to spit on Chris Pine.”

The movie’s director – and Harry’s now-ex — Olivia Wilde denied the spitting during a Sept. 21 appearance on The Late Show with Stephen Colbert. “He did not,” said Olivia. “I think it’s a perfect example of people who look for drama anywhere they can. Harry did not spit on Chris, in fact.”

Don’t Worry Darling was plagued with rumors before its wide release. There was drama over whether or not Olivia fired Shia LaBeouf, 36, who was initially cast in Harry’s role in the film, or whether he quit. Then, there were rumors of a falling-out between Olivia and Florence Pugh when the latter skipped many of the film’s press events.

Harry Styles’ Girlfriend: Who The Star Is Dating Now, Plus His Full Relationship Timeline