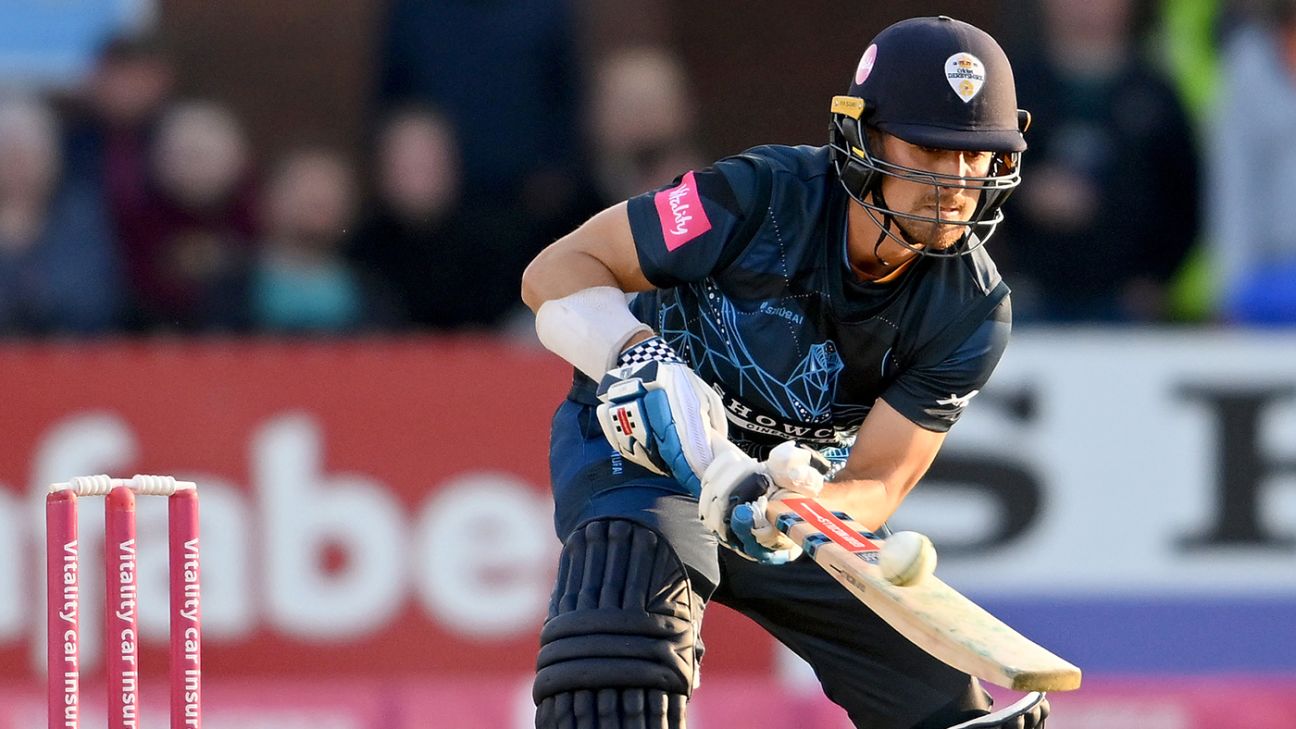 Harry Brook has found himself skippering Yorkshire in the Blast. He has inspired them with the bat all season, and put himself on the fringes on the England side, but captaining a weakened Yorkshire side in a rain-affected tie against Derbyshire at Queen’s Park was as tough as it gets. Yorkshire don’t much like playing Derbyshire, they don’t much like Chesterfield and they certainly don’t like rain-shortened games.

Brook held Yorkshire’s innings together with great maturity, making 77 from 50 balls in a total of 175 which flirted with collapse throughout. His captaincy had begun with a golden duck, but a team victory at Durham. It was a judicious innings, full of exquisitely timed strokes, and he probably felt he had done enough.

But a prolonged break for rain reduced Derbyshire’s target to 105 from 10. It was nip and tuck throughout, but Derbyshire needed 19 from the final over. Brook opted for Matthew Waite, ahead of Matthew Revis, as the rain returned, and the rest was probably a blur. It certainly was for Waite.

Derbyshire sealed victory with two balls to spare, Leus du Plooy taking 18 from four balls with a wide thrown in for good measure to finish with 48 not out from 20. He began by slog-sweeping a wide full toss over square leg for six, was gifted another boundary when Will Fraine misfielded on the square leg boundary and he concluded with a leg-side pick-up for six.

Waite, who had to cope with a wet ball, never really settled to his task. There were a lot of conversations, involving not just Brook but also Shadab Khan and, briefly, Tom Kohler-Cadmore, some gesticulating by the bowler and best-laid plans came to naught. Derbyshire, who are playing cool-headed T20 cricket under the influence of Mickey Arthur, have beaten Yorkshire twice this season and now replace them in the top four.

Yorkshire did have one bowling performance to celebrate. Dominic Leech, a tall fast bowler, generated decent pace and bounce, and looks a find. Yorkshire will claim him as one of their own as he was born in Middlesbrough, inside the old county boundary, but he could easily be viewed as another fast bowler on the northeast production line.

He was entrusted with the new ball and took two wickets in his first over. Luis Reece scooped his first ball over fine leg for six, but he was plumb lbw to the next. After two swish and misses, Wayne Madsen edged to the wicketkeeper for a third-ball duck. Brook was forced to bring him back for the eighth over with Shan Masood and du Plooy in control and again he came up trumps by having Masood well caught at short third. Dom Bess appeared to jar his knee in the process and left the field injured.

Yorkshire can hardly afford any more injury blows. They are making do without their normal T20 captain, David Willey, Adil Rashid and Dawid Malan, who are in the Netherlands with England. Their top-order batting is as destructive as it has been in T20 for many years, the main reason to imagine that Willey, who is leaving for Northants at the end of the season, has a fighting chance of keeping his promise to leave them with their first T20 title by way of recompense.

That Willey is leaving, grumbling that Yorkshire are putting the restoring of their reputation ahead of cricketing success (surely the two aims are intertwined?), can be laid at least partly at the door of the malcontents who disrupted the AGM in protest at the county’s reforms, and delayed the formation of a new independent board, which in turn meant that finalising of contract offers did not progress as fast as he wanted.

An outground, a boisterous crowd and memories of past defeats at Queen’s Park; there were reasons a plenty for Yorkshire to bat cagily for a while. Not when Finn Allen is at the top of the order, there weren’t. Finn has the highest T20 strike rate in the world (with apologies to the two Romania and one Belgium player who lie above him) and, if you strike at 176, the only thing you tend to take a look at is the ball heading for the trees. At Queen’s Park, there are lots of trees to choose from. Hayden Kerr watched the first ball of the innings disappear towards the pedestrian bridge which crosses Holme Brook and the A619 on its way into town.

Trying for successive straight sixes off the legspinner Matty McKienan, he should have been stumped. His 37 from 17 balls ended on the last ball of the Powerplay when he drilled McKiernan to midwicket, leaving Yorkshire dicily placed at 62 for 3.

The prime reason for that was Mark Watt, the Scotland spinner, who bowled three Yorkshire batters with near yorkers. His first over was a double-wicket maiden as Adam Lyth, opening his front leg, fell to Watt’s first ball; and Kohler-Cadmore made room to the off side and swung across one. Shadab Khan, who found batting form in a Pakistan ODI in Multan last Sunday, slapped the ball around to good effect and dented the roof of the St John Ambulance stationed behind the press box before he fell at 109 for 4 with nine overs remaining.

With Shadab’s departure went Brook’s support. Beyond the top order, they are misfiring. Fraine and Jordan Thompson are both having unrewarding seasons with the bat and Revis is too low in the order to make an impact. Fraine struck Yorkshire’s fastest white-ball 50 on this ground last season, in a Royal London Cup game reduced to 10 overs, but not for the first time his hitting was underpowered as he struck Hughes to long-on. Thompson is a bullish sort, but he had a tortuous time, 12 from 17 without a boundary to his name.

Thompson was the first of three wickets in the final over for George Scrimshaw, who Derbyshire followers put in the same speed category of the likes of Mark Wood. Injuries are largely restricting him to short formats, but he had Thompson and Revis caught at the wicket, and Bess lbw. Scrimshaw and Watt both had three wickets apiece, at economical cost, and the Vikings lost their last five wickets for six runs in 11 balls. With bat and ball, they lacked for experience when the pressure was at its highest.