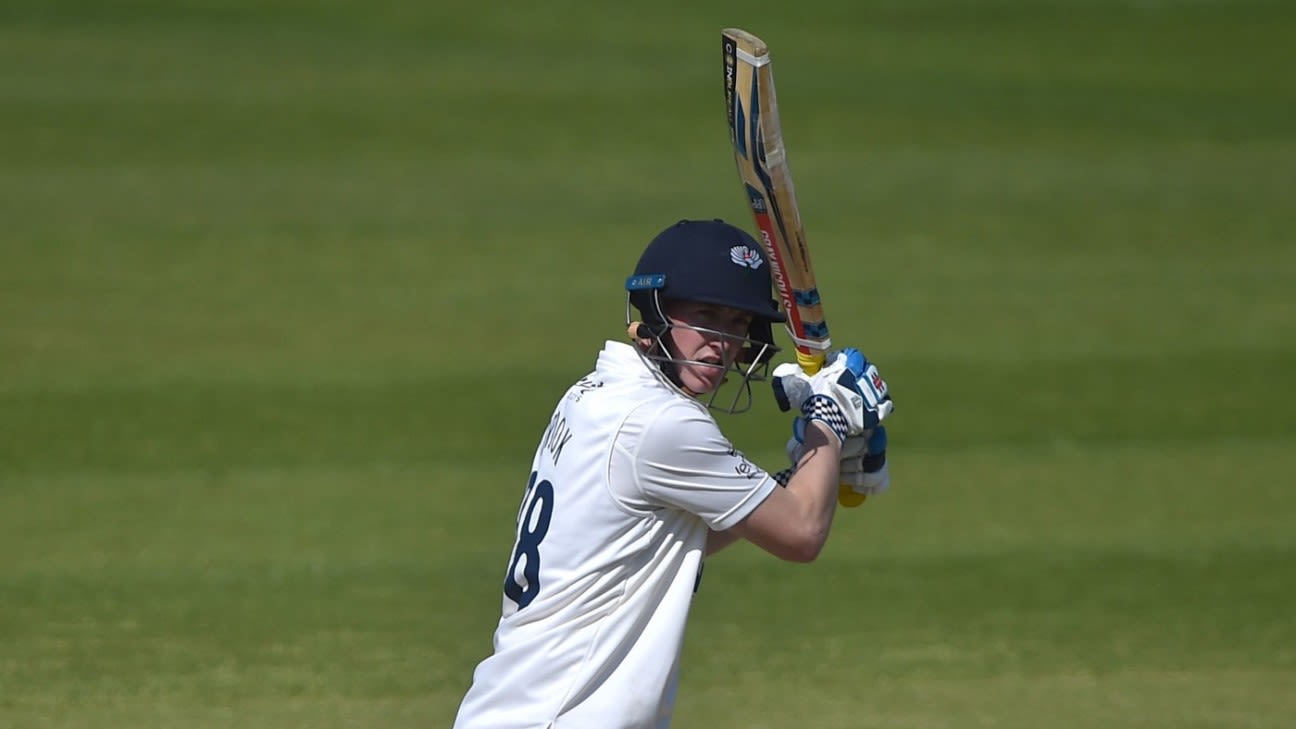 Harry Brook fell narrowly short of a maiden career double-century before lunch on day three as Yorkshire edged towards victory in their LV= Insurance County Championship clash with Kent at Headingley.
Brook, Division One’s second-leading run-scorer behind unbeaten Kent opener Ben Compton, continued his super start to the summer by advancing from 131 overnight to 194 and taking his tally of runs to 512 in five innings this summer.

Later in the day, Kent impressively resisted to close on 118 for 2 from 50 overs, giving them plenty of hope they can avoid a third defeat in four games to start 2022.

So far, the visitors have not needed to face Pakistan fast bowler Haris Rauf in their second innings given he is having a minor niggle in his left side assessed by the Yorkshire medical team. And in-form Compton will be at the crease on 67 having taken his season’s tally to 534.

Tongues are starting to wag regarding 23-year-old Brook’s chances of soon winning Test selection. Along with the likes of Tom Haines and Josh Bohannon, he is among a group of highly rated young batters and was watched here by James Taylor, England’s head scout.

He has now scored at least fifty in every innings this summer, including another century at Gloucestershire two rounds ago, having had a memorable winter of T20 cricket which saw him make his international debut in January.

Brook hit two sixes and 21 boundaries in his 265-ball innings, ended shortly before lunch when he gloved a pull at Nathan Gilchrist behind down leg. It was a tired looking shot to end his marathon 398-minute stay at the crease, and he was the third Yorkshire player to fall caught behind down leg following Adam Lyth and Dawid Malan on day two.

Brook, who cut and square drove a lot of his runs, shared partnerships of 269 for the fourth wicket with Malan on day two and 151 with Dom Bess for the sixth during the third morning.

Bess was also proactive on the way to 89, though sunk to his knees in disappointment when he fell short of a maiden century for the county. He was caught at slip following a loose drive at Jack Leaning’s off-spin as Yorkshire slipped to 496 for 7 early in the afternoon – a lead of 205. By that time, the maximum of five batting bonus points had been secured.

Young all-rounder Matthew Revis added a belligerent 53, including three sixes. It was his maiden first-class fifty and contributed to Yorkshire’s highest first-class total against Kent. One of his sixes was slapped over cover after a ball from Leaning had slipped out of the Kent captain’s hand mid-delivery and landed wide of the cut strip.

Revis was the last man out for Yorkshire, caught high at cover off the left-arm spin of George Linde, who claimed each of the last three home wickets to fall.

Brilliant sunshine was replaced by an overcast sky after tea. Kent lost their first wicket beforehand when Revis had Test opener Zak Crawley caught and bowled with a low full toss for 5, the seamer hanging onto a sharp chance as the score fell to 18 for 1 in the 11th over.

First-innings centurion Daniel Bell-Drummond departed for only two after tea when he drove Steve Patterson low to cover to make it 27 for 2 in the 18th.

Patterson had Compton dropped behind by Harry Duke on 46, while Leaning also offered a couple of sharp chances to George Hill and Thompson on the way to 31.