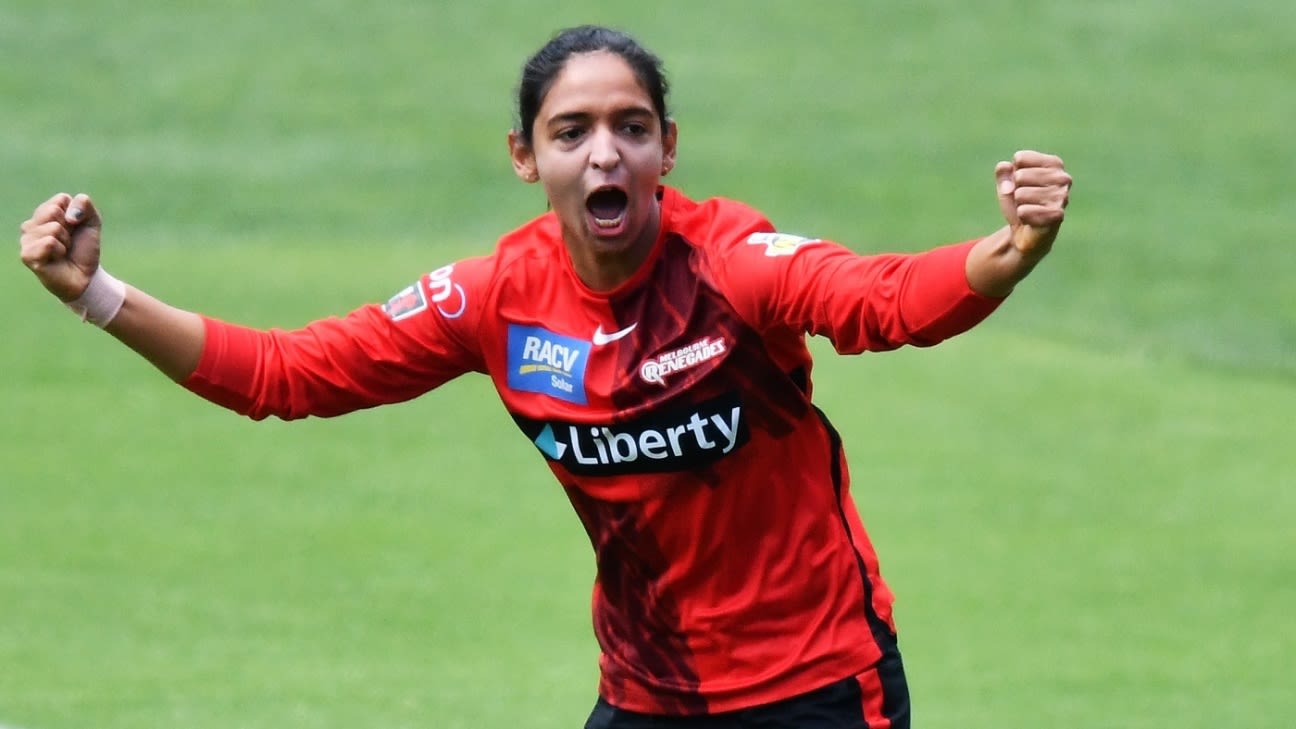 Harmanpreet Kaur is hopeful a women’s IPL can be established sooner rather than later, after she created history becoming the first Indian to be named WBBL player of the tournament following a stunning season for Melbourne Renegades.

The India T20I captain made 399 runs for the tournament at an average of 66.50 and strike-rate of 135.25, including three match-winning half-centuries. In addition to being Renegades’ leading run-scorer, she was also their leading wicket-taker bagging 15 wickets at an economy rate of 7.46, bowling a lot of vital powerplay and death overs.

She was Player of the Match three times and polled 31 votes, under a 3-2-1 voting system that is voted on by the standing umpires after each match. She finished three votes clear of Perth Scorchers duo Beth Mooney and Sophie Devine.

Harmanpreet becomes the third overseas player to be named the WBBL’s player of the tournament after New Zealand duo Devine (twice) and Amy Satterthwaite. She hoped it was another stepping stone towards the establishment of the women’s IPL in the short-term future.

“I think we have been looking at this for a long time and I hope, you know, sooner this women’s IPL will also start and we will also invite overseas players over there so that they can also share their experience with our domestic players,” Harmanpreet said. “I think this is something we are really waiting for and I hope, you know, this will start.

“Performance is something which is in our hands and that’s what we have been doing and the rest of the things are totally dependent on BCCI and the cricket board.

“We can’t do something extra on that but we can only request and that’s what we have done, you know, for many years.

“They know better than us. They know when to do it and how to start and they are also thinking about that and I’m sure, you know, they will definitely come up with something for women’s cricket.”

Harmanpreet has been breaking ground for Indian women’s cricket ever since becoming the first Indian to play in both the WBBL and the Super League in England. She is hoping to inspire the next generation of players with her deeds in the WBBL.

“Playing any tournament will give you lots of confidence and WBBL is something, you know, it’s a very, very big platform back home,” Harmanpreet said. “Every Indian wants to play in this league and I was the first one who got this opportunity to play and today, you know, winning this player of the tournament definitely gives lots of confidence to Indian girls also. They can also come here and perform and, you know, be part of this and then there are all the chances to achieve a lot in their cricket career.”

Harmanpreet paid tribute to Renegades teammate Jemimah Rodrigues and coach Simon Helmet for their support throughout the tournament.

“I think that is the reason I was more calm,” Harmanpreet said. “I was enjoying [playing] more because you know I had a teammate from back home and I really, really enjoyed her company.

“Simon is a very, very nice human and is a great, great coach. I was lucky, you know, I played under him and I learned a lot from him and I think when I go back, I will definitely share his working skills with our coaches and definitely share this experience with my teammates.”

Harmanpreet knows the job is not done as the Renegades wait to face the winner of Tuesday’s Eliminator between Brisbane Heat and Adelaide Strikers in tomorrow night’s Challenger. If they win the Challenger they will fly to Perth to face Scorchers in the final on Saturday. Harmanpreet didn’t bat in the last match against Heat but is fit for the Challenger.

“I was not feeling well that day,” Harmanpreet said. “But luckily I’ve got four or five days off now and feeling much better now and I’m ready to go.

“I have never [won] any title like this so far. And if we win, that will be a very great achievement for me.”

Meanwhile, Phoebe Litchfield was named WBBL ‘Young Gun’ as the best player under the age of 21. The award is selected by Australia’s national selection panel.

“It means a lot to be recognised with this award,” Litchfield said. “It’s a surprise, to be honest. I could think of a number of other young players who would be deserving of this award, which is really exciting for the future.

“Batting at No. 3 was a challenge but also a great opportunity. I was very privileged that Trevor Griffin trusted me with that spot and I hope I made the most of it.”

Shreyas Iyer: Century on Test debut is the ‘biggest achievement of my life’

Reliance to own a team in UAE-based T20 league