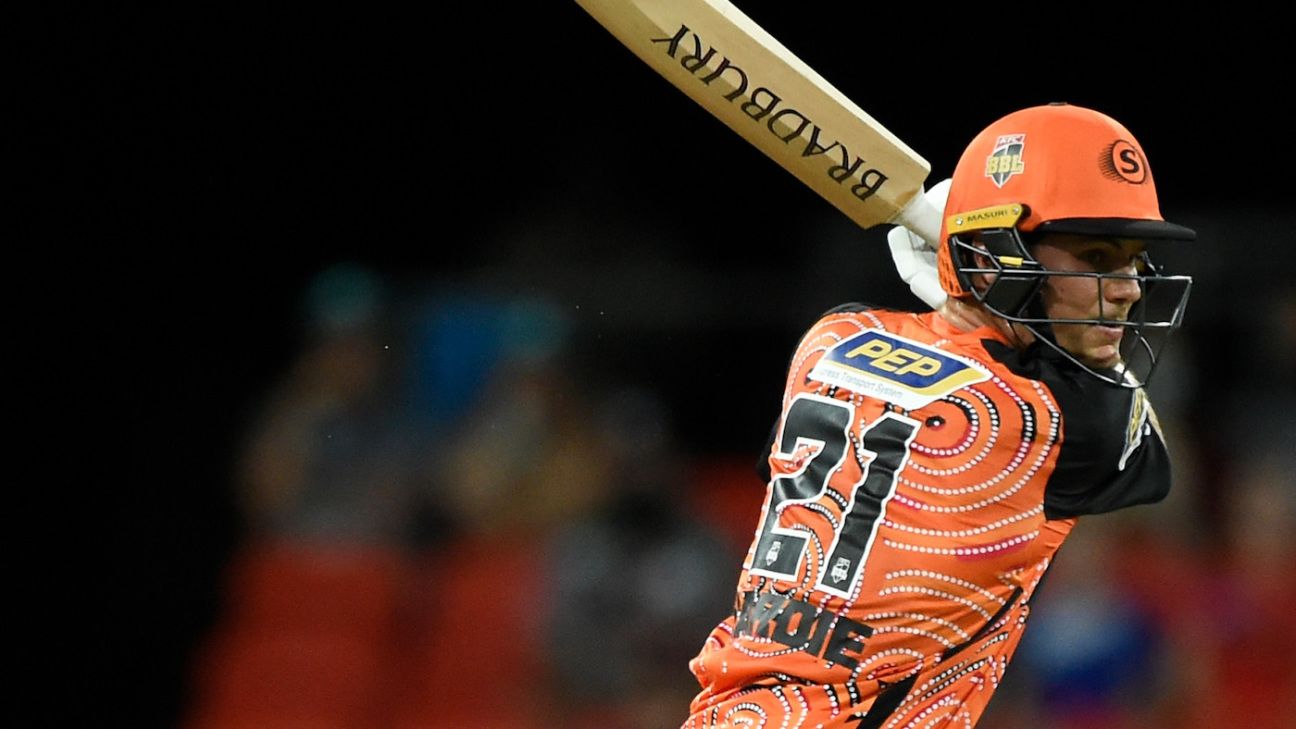 In a battle between last season’s finalists, Sydney Sixers suffered a 10-run defeat, failing to chase 144

In a battle between last season’s finalists – and winners of six of the 10 BBL titles – Scorchers showcased their mastery at defending but were given a scare by Christian, who single-handedly kept Sixers afloat with a 61-ball 73 before falling in the penultimate over.

It was a statement victory for the gritty Scorchers, who looked in big trouble at 5 for 69 after electing to bat first. They recovered to post a competitive total that proved just enough on a bowler-friendly pitch at Metricon Stadium.

Heat were supposed to play Sixers but the game has been rescheduled for Wednesday.

Scorchers dig out of major hole

Missing Mitch Marsh and Josh Inglis, Scorchers’ top-order looked out of sorts on a two-paced pitch. A scratchy Colin Munro looked a shadow of the belligerent batter who sits second overall in runs scored this season.

He made an excruciating 27 off 36 and the in-form Kurtis Patterson similarly could not conjure fluency which has been a feature of his breakout BBL season. The pair didn’t hit a boundary during a barren five-over stretch as Scorchers eventually slumped to 5 for 69 when Munro’s misery ended in the 13th over.

Perhaps the dramatic change in fixtures rattled them but Scorchers finally got going during the Power Surge, where Aaron Hardie and Ashton Agar smashed 20 runs in the 16th over. It ignited them as Agar, whose handy lower-order batting hasn’t been needed much this season, swung lustily while the 22-year-old Hardie provided the finishing touches with a career-best 45 from 24 balls.

Sixers were without Pakistani spinner Shadab Khan, who was ruled out due to Covid-19 border controls. But they received a boost with the return of former Test quick Jackson Bird, who had been sidelined all summer due to an Achilles injury, and he took a liking to the uneven bounce.

With the Sixers’ talented quicks probing early, captain Moises Henriques resisted using frontline spinner Steve O’Keefe in his customary role inside the four-over powerplay and, instead, held him back to the eighth over. The veteran hadn’t bowled in three weeks since a calf injury but O’Keefe’s night was cut short after copping a blow in his follow-through which injured the middle finger in his non-bowling hand.

Christian kept Sixers in command with two wickets in the 11th over followed by a terrific juggling one-handed catch to dismiss Ashton Turner as rising quick Hayden Kerr continued his impressive season.

But Sixers endured a tardy finish, where they leaked 60 runs off the last five overs as the momentum shifted.

With spearhead Jason Behrendorff and Matt Kelly sidelined, Scorchers’ enviable pace depth was underlined with speedster Lance Morris opening the bowling. The ex-Renegades player, who is capable of bowling over 150kmph (93mph), claimed the key wicket of Josh Philippe with a fiery short delivery and then dismissed Henriques.

In his last BBL match of the season, English import Tymal Mills wanted to finish with a bang and he did that with the wickets of James Vince and Jack Edwards as Sixers lurched at 4 for 16.
Andrew Tye, who has starred all season, claimed two wickets in the 13th over to leave Sixers spiralling at 6 for 67.

Scorchers had to withstand a furious late rally from Christian but kept their composure under pressure through superb death bowling from Tye and Mills, who had a stellar campaign yielding 12 wickets from six games.

In a worrying sign for the two-time defending champions, Sixers have had horror collapses in their last two innings. They escaped against Heat but couldn’t repeat the heroics despite the best efforts of Christian, whose terrific outing continued with the bat.

He was lucky to survive numerous chances but really got going when he smashed consecutive sixes off Agar in the 18th over to get Sixers within sight of another miraculous win. But Christian fell with 20 runs still needed and just seven balls left to end his audacious bid.

Sixers will rue another top-order collapse, with stars Philippe and Henriques’ perplexing form continuing after strong starts to the season.