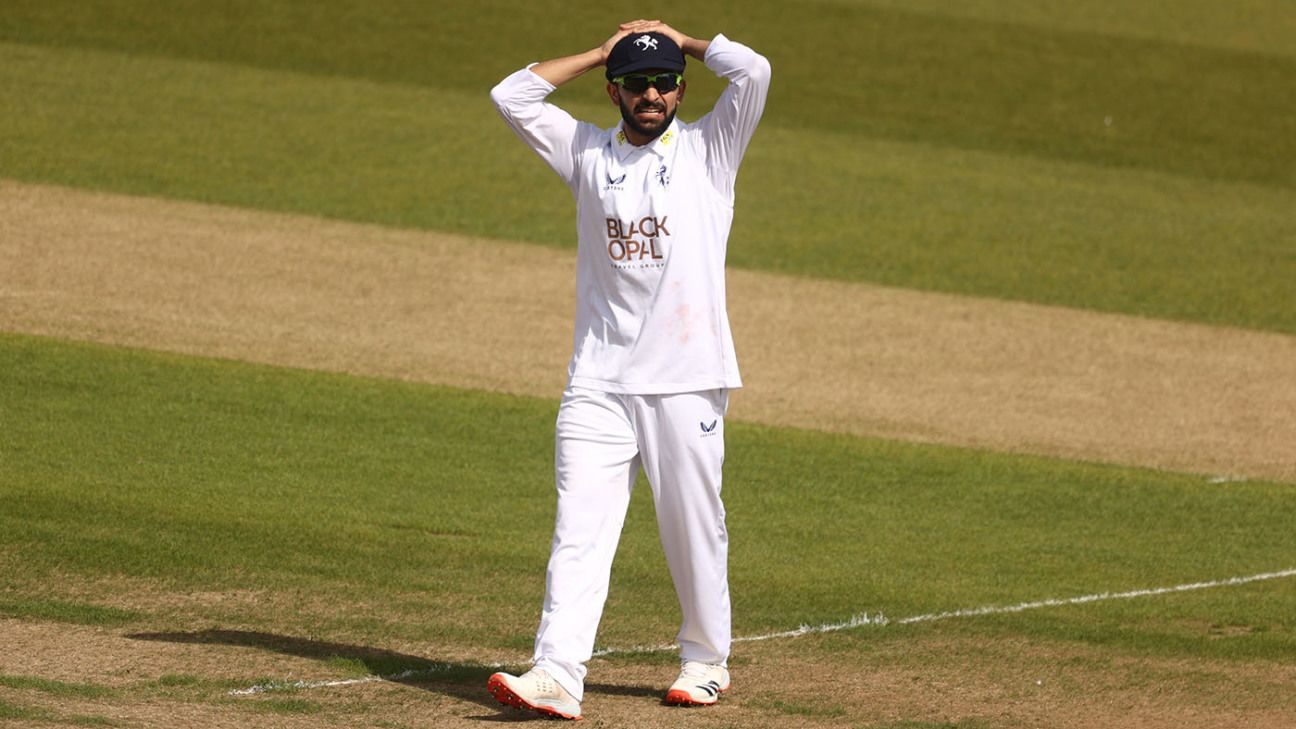 On the day after they secured Division One status for another season, Kent thrashed Somerset by an innings and 151 runs in the LV= Insurance County Championship at Canterbury.

Hamidullah Qadri hit a career-high 87 as Kent made 492 in their first innings, a lead of 290. Although Kasey Aldridge recorded his best first-class figures of 6 for 110, it was a day of pain for Somerset.

The result means Kent leapfrog Somerset in the final standings and could finish as high as fifth, having been dogged by the fear of relegation for the second half of the season.

The atmosphere at the Spitfire Ground was the most relaxed it had been all year and although Conor McKerr was removed early on for six, caught at third slip by Tom Abell off Craig Overton, the bowler limped off with an injury soon afterwards and the runs began to flow.

Qadri might be considered as purely a spinner, but he averages over 43 in first-class cricket and from his overnight 27 not out, he raced past 50 with three boundaries off successive Jack Brooks deliveries, the third off which flew inches over the slip cordon.

Gilchrist joined Qadri and put on 48 for the ninth wicket before he was bowled by Aldridge for 14 but Qadri then hit Ben Green for two successive sixes and a four and he eventually fell 13 short of a maiden first-class ton when he edged Aldridge behind.

Somerset didn’t even make it to the tea interval, subsiding in 40.4 overs. Ollie Robinson was allowed to lead Kent into the field to mark his final game before leaving for Durham and he caught Andrew Umeed off Quinn for three in the third over. Qadri then bowled Abell middle stump for five, leaving Somerset on 19 for 2 at lunch.

Quinn removed George Bartlett for four, caught by Tawanda Muyeye at short midwicket with the fifth ball of the afternoon session and Joey Evison took his maiden first-class wicket for Kent when he drew an edge from James Rew, who fell for 10 to a sharp catch by Daniel Bell-Drummond at third slip.

Green was then dropped by Jack Leaning off Gilchrist and at this point a West Country voice in the crowd yelled: “Come on Somurrrrset, you’ve kept them up now get on with it!” In the next over Green was caught behind off Bell-Drummond.

When Bell-Drummond then had Tom Lammonby caught by Zak Crawley at first slip for 23, Overton limped on and immediately smacked a four, but he was clearly struggling and Gilchrist soon sent Aldridge’s off stump cartwheeling for 15.

Gilchrist then had Overton caught by Crawley for a brave 12 and despite some entertaining swinging from Sajid Khan, who made 40 from 19 balls , the victory was confirmed when, having hit Qadri for successive sixes, he tried his luck for a third time and was caught on the boundary by Muyeye.