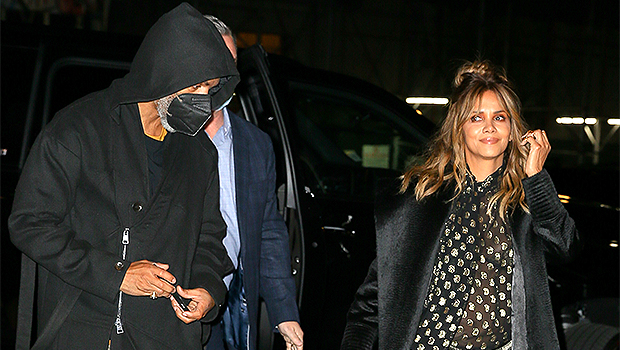 Halle Berry and her beau Van Hunt enjoyed a romantic date night at the DGA Theater in NYC, where paparazzi caught the couple looking super stylish and so in love.

Halle Berry, 55, is going strong with her boyfriend Van Hunt, 51. The Bruised actress and the musician, who have been dating for over a year now, were pictured heading to their latest date night on November 22 at the DGA Theater in New York City. Halle looked so stunning in a sheer pattered black top and matching tie, as well as baggy silver pants that covered her fishnet leggings and reached just above her leather heels. Halle also ensured she’d stay warm in the East Coast end-of-fall weather by wearing a comfy black coat over her ensemble.

As for Van, he went with a similarly dark-colored choice of attire for the night out. The singer-songwriter sported an oversized black winter coat, gray pants, and white sneakers. He kept the hood of his coat up over his head that, with the addition of a black face mask covering his nose and mouth, really kept Van incognito. However, since he was walking right beside his Oscar-winning actress girlfriend, the jig was definitely up as far as Van’s identity goes.

Halle and Van have been enjoying some trendy date nights as of late. In October, Van was by his woman’s side when Halle was honored at ELLE’s “Women In Hollywood” event in Los Angeles. The X-Men actress didn’t mention Van during her speech, but he proudly supported her in the audience and cheered the A-list star on. The couple even coordinated outfits for the event!

It was September 2020 when Halle and Van confirmed their romance, following much speculation from fans. They’ve been smitten together ever since, and Van even opened up in March 2021 about how his relationship with Halle has affected his life. “The inspiration for our relationship goes across everything, even in my parenting. I’m a completely different person, I can say it like that, and I think that it’s improved every aspect of my life,” Van told Entertainment Tonight.

Halle has recently been doing a lot of press for her directorial debut Bruised, which will be hitting Netflix on November 24. She also stars in the film about an MMA fighter who tries to come back to the ring after leaving the sport in disgrace.