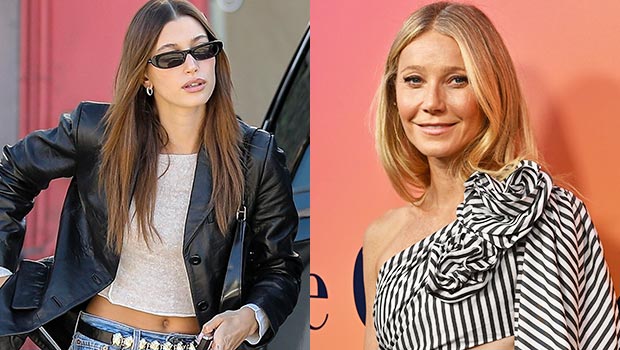 Hailey Bieber, 26, made a fashion statement when she recently wore a white crop that had the words, “nepo baby” on it, during an outing, and Gwyneth Paltrow, 50, couldn’t help but respond. The model‘s shirt, which she paired with baggy light blue jeans, was showed off in an Instagram post shared by InStyle Magazine on Jan. 6, and the actress wrote, “I might need a few of these,” in the comments section.

“Nepo,” of course, stands for nepotism, which describes power, privilege, and/or advantage that is given to relatives or friends in an occupation or field. Since Hailey comes from a famous acting family, which includes her actor dad Stephen Baldwin, she seemed to be wearing the shirt as a statement about herself. Gwyneth, who also comes from a famous family, which includes her actress mother Blythe Danner and late director dad Bruce Paltrow, most likely can relate, which is probably why she showed interest in the eye-catching top.

Hailey’s outing in her crop top comes after many other celebrities gave their opinions on a new viral topic called the “nepo baby debate.” The topic started when New York Magazine released a cover story about nepotism and featured a number of A-listers’ faces on the body of babies, because they’re the children of famous stars. Some of the celebs included Dakota Johnson, John David Washington, Jack Quaid, Maude Apatow, Lily-Rose Depp, Ben Platt, Maya Hawke, and Zoe Kravitz.

The attached article mentioned these stars as well as many others who have either a family member or close friend in the business, and explained how that makes it easier for them to get opportunities that other people might not have, therefore leading to a higher chance at a successful career. It led to a debate about whether or not nepotism is a good or bad thing, and high-profile celebs, like Jamie Lee Curtis, who is the daughter of the late actress Janet Leigh and actor Tony Curtis, publicly spoke out.

“I have been a professional actress since I was 19 years old so that makes me an OG Nepo Baby,” Jamie wrote on Instagram alongside two photos of herself with her famous parents. “I’ve never understood, nor will I, what qualities got me hired that day, but since my first two lines on Quincy as a contract player at Universal Studios to this last spectacular creative year some 44 years later, there’s not a day in my professional life that goes by without my being reminded that I am the daughter of movie stars.”

“The current conversation about nepo babies is just designed to try to diminish and denigrate and hurt,” she continued. “For the record I have navigated 44 years with the advantages my associated and reflected fame brought me, I don’t pretend there aren’t any, that try to tell me that I have no value on my own. It’s curious how we immediately make assumptions and snide remarks that someone related to someone else who is famous in their field for their art, would somehow have no talent whatsoever.”

“I have come to learn that is simply not true,” she added. “I have suited up and shown up for all different kinds of work with thousands of thousands of people and every day I’ve tried to bring integrity and professionalism and love and community and art to my work. I am not alone. There are many of us. Dedicated to our craft. Proud of our lineage. Strong in our belief in our right to exist.”