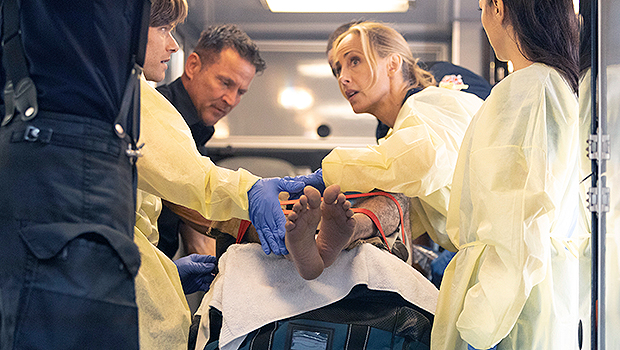 Meredith bites the bullet and sends out the email about leaving Grey Sloan. Everyone is shocked by the news, but this is not going to be a long, drawn-out process. Maggie and Amelia are helping Meredith pack up her things.

As for Meredith’s future with Nick, that’s uncertain. She hasn’t talked about the move with Nick just yet, but she does have a Whipple surgery planned with him.

Lucas Spills The Beans About His Family

A thunderstorm that’s blowing through Seattle is threatening the opening of the women’s clinic. The accreditation also hasn’t come through, so the opening gets delayed.

Amelia confronts Lucas about telling everyone that they’re related. Lucas admits that Simone knows the truth, but it’s clear that Blue and Mika still don’t know when they walk into the elevator. Amelia has had enough. She forces Lucas to clear the air.

Lucas tells the interns and Nick that Amelia’s sister is his mom. “I’m a Shepherd,” he says. In the midst of this revelation, the interns are understandably nervous after Meredith’s email. “This program is more than one person. You are the program,” Nick tells them, easing their fears.

While preparing for the Whipple, Nick tells Lucas that he’s “good enough” to make his own name. Richard goes to Nick to ask if he should be expecting his resignation as well. Nick honestly has no idea what’s going on with Meredith. Richard just wants to be prepared across the board.

Aniela Gumbs: 5 Things To Know About The 13-Year-Old Star Who Plays Zola On ‘Grey’s Anatomy’

Meredith and Nick finally have a conversation about the move before the surgery. He’s not sure how to approach this because he doesn’t want to say the wrong thing. “I want to fight for us. I want to try,” Meredith says. Nick is upset that she agreed to this move without even talking about it with him. “I’m being supportive because there’s no other answer,” he says.

Winston joins Maggie to help pack up Meredith’s house. He tells her that he’s thinking about taking this fellowship for vascular surgery. Maggie accuses Winston of switching specialties to stay away from him. Winston swears that’s not what this is. He believes that if they keep working together they’re not going to make it.

Winston is willing to give up cardio for their relationship. “That is the opposite of what I want,” Maggie says. For Winston, it’s simple. “You are my passion, Maggie,” Winston says. Maggie fully admits that she doesn’t respect him for that. Suddenly, their conversation is cut short when lightning strikes the house.

When Lucas appears to space out, Meredith kicks him out of the Whipple surgery. Simone steps in for him. Richard and Bailey are watching from the gallery, and he tries to persuade her to take over as chief of surgery. “No one can run this place like you,” he says. Bailey’s attention is solely on the clinic.

Bailey gets a call from Ben about what’s going on at Meredith’s place. Richard rushes into surgery to talk to Meredith. There’s a fire at Meredith’s house, and no one can get a hold of Winston and Maggie.

Meredith immediately heads home. Everyone is safe, but the fire is still raging. Meredith and the kids are forced to watch as firefighters try to save their home. Maggie reveals she managed to save Meredith and Derek’s beloved Post-it.

After a complex surgery, Mika is left stunned by Teddy. “You are a badass boss lady surgeon, and I want to be you when I grow up,” Mike says. After overhearing this praise, Owen tells Teddy that she should apply to be chief of surgery.

Blue reveals to Jules that he didn’t get into any medical school in the United States. He was a straight-A student in high school, but his grades fell in college when his mom got sick and later died.

Lucas is frustrated after being kicked off Meredith’s surgery. Simone tries to calm his spirits. He yells at her out of anger, and she tells him that he should be thanking her for saving him. They share a passionate kiss, but Simone cuts it short. “I can’t,” she says. When he asks why, she replies, “Because I can’t.”

In the wake of the storm, Bailey’s clinic can officially open. She’s named the clinic after her mother, Elena Bailey, the woman who helped shape Bailey into the woman she’s in today.