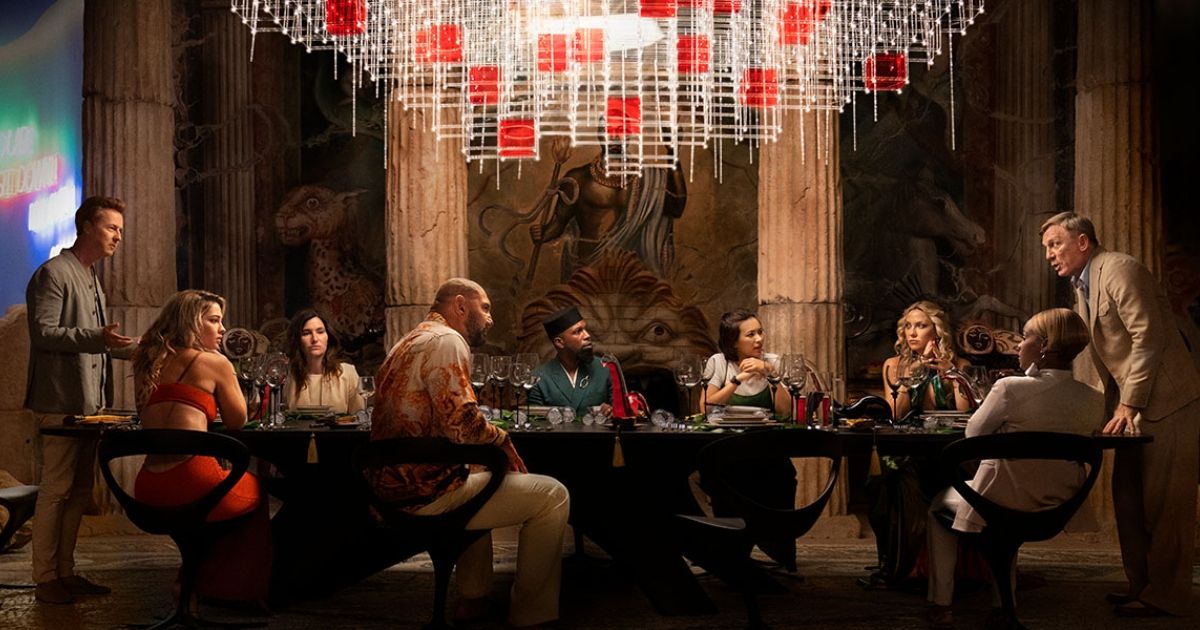 Despite being overhyped when it was released in 2019, Knives Out was a fantastic crime thriller. Fans, on the other hand, have always been eager to see another film with the actors and a similar plot full of twists and turns. Given that it grossed $311 million at the box office, a sequel would be a splendid opportunity to expand the Knives Out franchise.

The sequel, Glass Onion: A Knives Out, stars some prominent Hollywood actors such as Daniel Craig, Dave Bautista, Kate Hudson, Edward Norton, Jessica Henwick, Janel Monae, and Kathryn Hahn. The film is a collaboration of production companies Lionsgate and T-Street. While Netflix is in charge of international distribution, Cineworld Group will release the movie in UK theaters. With a similar premise to the first film, Daniel Craig’s Benoit Blanc returns to investigate yet another mystery, but this time he’s not just a detective but also a suspect.

In the hopes of getting massive success from the popularity of the original Knives Out film, Netflix has released a trailer for Rian Johnson’s standalone sequel, Glass Onion: A Knives Out, on its YouTube channel. Here’s a breakdown of the film’s official trailer.

A Weekend With a Murder Mystery Game

The trailer starts with a stunning depiction of a town by the sea in Greece, and an elegant woman arrives at the dock and exclaims enthusiastically. Following that, we see Dave Bautista’s Duke Cody, Kate Hudson’s Birdie Jay, Leslie Odom’s Lionel Toussaint, and a few others arrive at the port, intending to spend their weekend away from town. They hug each other as they go to an island to meet the person who organized the trip, expressing how glad they are to spend the weekend together.

Related: Knives Out 2: Plot, Cast, Release Date, and Everything Else We Know

However, a surprising individual, Benoit Blanc, played by Daniel Craig, shows up at the beach, making the weekend even more eventful. Miles Bron, the group’s host, is taken aback by Blanc’s presence and expresses his astonishment.

The scene then proceeds to the next stage, in which the host, Miles Bron, explains why he invited everyone to the island, saying, “I’ve invited you all to my island because tonight a murder will be committed, My Murder.” Duke Cody adds a humorous remark to his solemn tone by wondering if they would still be able to communicate with him when he’s dead.

Miles explains the game’s rules and how he’s concealed numerous clues throughout the island to the guests. And the person who can identify the killer is declared the winner. To everyone’s surprise, the lights go out at night, and we notice a bullet hole in the glass.

An Unexpected Turn of Events

While everyone expects to play a murder mystery game while Miles fakes his death, a startling event unfolds. Then we hear Daniel Craig’s voice narrating the situation, highlighting each character “Ladies and gentlemen, there has been a murder, and the killer is in plain sight.”

When he insists that no one should touch the body, Miles wakes up and questions the detective about his interference in the game. It implies that Miles has been pretending to be dead for a while, but there has been another murder victim who has not yet been shown to us in the trailer. With this change of events, no one anticipated a murder to take place for real, and the killer is now officially on the loose.

The Killer Is on the Loose

Everything is in chaos after the unexpected twist since no one knows who the murderer is or what motivated them to commit such an atrocity. In spite of the circumstances, a few characters, such as Duke Cody and Kathryn Hahn, seem at ease. When the group initially lands on the island, we witness Duke Cody holding a firearm and firing it into the air. While it is obvious that he is the killer, it might simply be a ploy to distract the audience.

As the trailer rolls to the following scene, we find the group gathered in a room, trying to figure out who committed the murder. Janelle Monae’s Andi Brand, who stayed silent all along the trailer, leads the discussion and explains why everyone would stab a friend in the back to hold onto the rich host, implying Miles is also an accomplice in the crime. However, in the words of Kathryn Hahn’s Claire, “Are we even going to talk about the elephant in the room?” she points out furiously at Andi Brand, referring to how she is the obvious culprit and no one talks about it.

The trailer then shifts to a sequence of shots in which Jessica Henwick’s Peg wields a trident in fear, Dave Bautista’s Duke Cody witnesses something cautiously, and all of their pasts are highlighted. Although there is no specific suspicious character as the killer yet (apart from Cody), the trailer’s subsequent scenes give us a hint. Birdie Jay, played by Kate Hudson, is shown in a relationship with Miles, and even Benoit Blanc describes her as dangerous. The trailer once again bombards the viewer with action scenes in which every character is involved in a bitter struggle. The trailer concludes with a mysterious character from a dark room pointing a gun at Benoit Blanc, evidently not wanting to be found.

Glass Onion: A Knives Out will premiere on Netflix on December 23, 2022, as part of the fall 2022 lineup, and you will finally be able to solve the murder mystery and identify the killer.