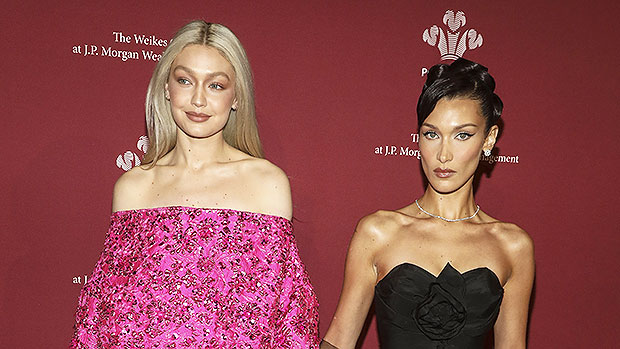 Gigi Hadid and her younger sister Bella Hadid turned heads at the The Prince’s Trust Gala! The elder sister, 27, was on-trend in head-to-toe Valentino from the brands recent headline-making “Pink PP” show, opting for an off-the-shoulder sequin mini dress, bright opaque tights and pointy platform Mary Jane shoes. She held Bella’s hand as they made their way to the venue in New York City, both posing for photographers outside before heading to the step-and-repeat.

Bella, 25, was also looking fresh off the runway in all black. The California native looked exquisite in a strapless black bow dress with a ballroom like skirt, cut high enough to see her chic black suede pumps. The brunette opted to keep her hair up in a bun while Gigi rocked her blonde hair down in a blow out. Bella also added simple diamond studs and a necklace to her evening-ready look.

The Prince’s Trust gala, hosted by Lionel Richie, is in support of The Trust was established by Prince Charles 44 years ago. The organization is aimed at supporting young people who face hardships like unemployment, poverty, mental health, abuse or disability through education, finding jobs or even starting their own business — and has helped almost one million people since its inception. The organization has also returned $1.7 billion in value to society over the last 10 years, per their website. Today, The Trust is in over over 20 countries globally, now including the United States.

Gigi has had a particularly festive week, as she celebrated her 27th birthday at members-only club Zero Bond last Saturday. The blonde bombshell radiated as always with a white lace outfit that included a bustier style top and sheer pants, along with a long overcoat. Sister Bella was of course on hand to help Gigi mark the occasion, and was even spotted handling a large balloon display earlier in the day! Other celebs that attended the bash included Gigi’s BFF Blake Lively, along with pals Emily Ratajkowski, Antoni Porowski, Martha Hunt, and Helena Christensen.