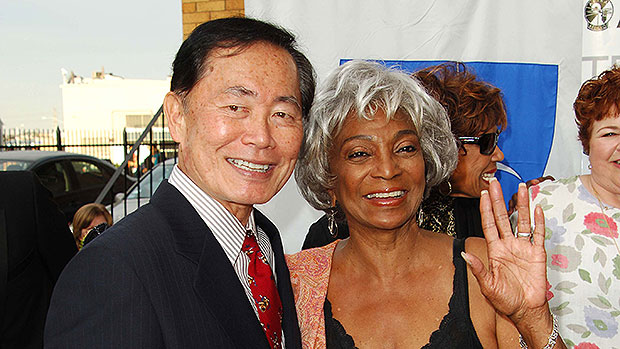 George Takei shared an emotional tribute for his friend and former Star Trek cast member Nichelle Nichols, after her death at the age of 89. The actor, 85, shared a sweet selfie of the two giving the iconic Vulcan hand greeting at a past fan convention. “I shall have more to say about the trailblazing, incomparable Nichelle Nichols, who shared the bridge with us as Lt. Uhura of the USS Enterprise, and who passed today at age 89,” he wrote in a tweet on Sunday, July 31.

We lived long and prospered together. pic.twitter.com/MgLjOeZ98X

“For today, my heart is heavy, my eyes shining like the stars you now rest among, my dearest friend,” he also wrote. “We lived long and prospered together,” he added in a second tweet.

Nichols, who was born, Grace Dell Nichols was widely regarded as a trailblazer in the television industry for her portrayal of Black lead Lieutenant Nyota Uhura, debuting in 1966. As Uhura, she also shared the first-ever interracial on-screen kiss on American television with fellow cast-member William Shatner‘s Captain James T. Kirk. The role was so monumental, that Martin Luther King Jr. called it “the first non-stereotypical role portrayed by a black woman in television history.”

Nichols made her final public appearance at Comic Con in Los Angeles last December where she greeted fans alongside members of her family, including son Kyle Johnson and sister Marian Michaels.

Her death was confirmed by Gilbert Bell, who worked as both her business partner and talent manager. Nichols passed away in Silver City, New Mexico. Her son also took to Facebook with a statement following her passing. “Her light however, like the ancient galaxies now being seen for the first time, will remain for us and future generations to enjoy, learn from, and draw inspiration,” he wrote. “Hers was a life well lived and as such a model for us all.”