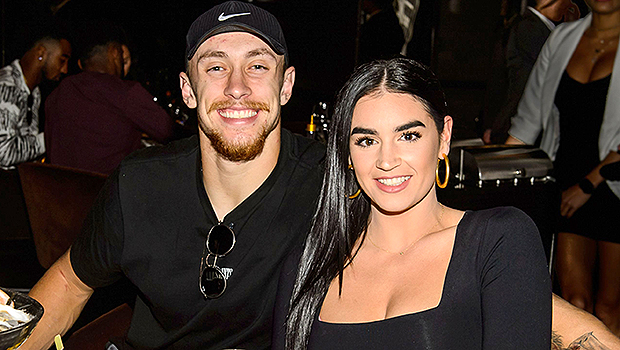 George Kittle will be one of the most exciting players to watch during Sunday’s playoff game between the San Francisco 49ers and the Philadelphia Eagles. The tight end, 29, has been one of the most exciting players during the playoff season. By his side throughout his career, he’s had his now-wife Claire cheering him on! She’ll undoubtedly be rooting for him during the playoff game on Sunday, January 29. Find out everything you need to know about George and Claire’s relationship here.

While George has been in the NFL for five years, Claire has actually seen him play for much longer! In a video that he made to propose to Claire, the player revealed that he first saw her outside of his college dorm building. “The first time I saw Claire, I was a freshman in college. I was 18 at the University of Iowa,” he said in the clip that Claire shared on Instagram. “I saw her and I was like, ‘G****** who is that?’”

George said that his roommate at the time had a less-than-favorable opinion of his future wife, but he wanted to get to know her better. He joked that he spent “8 months in the friendzone,” before he “tricked her into liking him.” When the player got drafted, he said that she joined him in San Francisco quickly, and he couldn’t think of it any other way. “She’s such an important part of my life. She’s helped me grow and become a more mature person. Someone who can actually handle my s***,” he said in the video. “Her smile basically brightens up every room that she’s in.”

She has a blog

While her husband is well-known as the tight end for the 49ers, Claire runs an amazing blog called Lettey Set Go, named as such based on a nickname that George gave her, based on her middle name Colette. Her blog details her travels, life experiences, and also contains shopping tips for brides, everyday fashion, and of course 49ers fans! “I want to show and share with you, all of my tips & tricks, the should nots and would nots, the definitely’s and maybe’s, and all of the ins and outs I’ve learned,” she wrote on the website’s About page. “You’ll find travel inspo, where to go, when to go, and how to do it right. Fashion and beauty creativity. As well as anything and everything I am currently experiencing in my life. I’ll share it all. I’m an open book.”​

George popped the question to Claire on August 10, 2018! The proposal video that he filmed included an interview of himself speaking about their relationship. George surprised her by saying that they were filming a “Couples in the NFL” segment, when he surprised her with a proposal. “Down on one knee and looking as handsome as ever! I had the biggest smile on my face and I literally couldn’t believe what was happening!” she wrote about the surprise in her blog.

Less than a year after popping the question, the couple revealed that they got married in an impromptu ceremony in April 2019. Both of them shared photos from their wedding on Instagram. Claire looked gorgeous in a white pantsuit, while George sported a pair of gray, checkered khakis and a white button-down. “SURPRISE! I married my best friend. Dibs forever. I love you wifey,” George wrote on his Instagram.

The couple had planned to have a larger celebration in July 2020, but had to delay due to the COVID-19 pandemic. Claire revealed that they had a full-on party to mark their two-year wedding anniversary, with a much bigger ceremony in a sweet video.

Claire was a college basketball player

Besides becoming friends early freshman year of college, Claire was also an athlete when she and George met, so it should come as no surprise they have a fair amount in common! She played for the University of Iowa women’s basketball team, and she wrote that the dorm they lived in was mostly occupied by student-athletes in her proposal blog. After graduating, she’s continued her passion for physical fitness. She owns her own fitness business and has worked as a personal trainer and health and wellness specialist, according to her LinkedIn.

She regularly cheers on her husband

As the 49ers try to make it to the Super Bowl, Claire will undoubtedly be there to root for George and the team as they try to bring home a ring! She regularly posts photos of herself on the sidelines and also shares shots of her hubby and some pictures of the two of them with some PDA on the field! When the team won on January 8, she shared a compilation video of herself and loved ones going to the game and captioned that the 49ers had a lot of luck. “Lucky brought 2 touchdowns & a big Niners win,” she wrote in the caption.