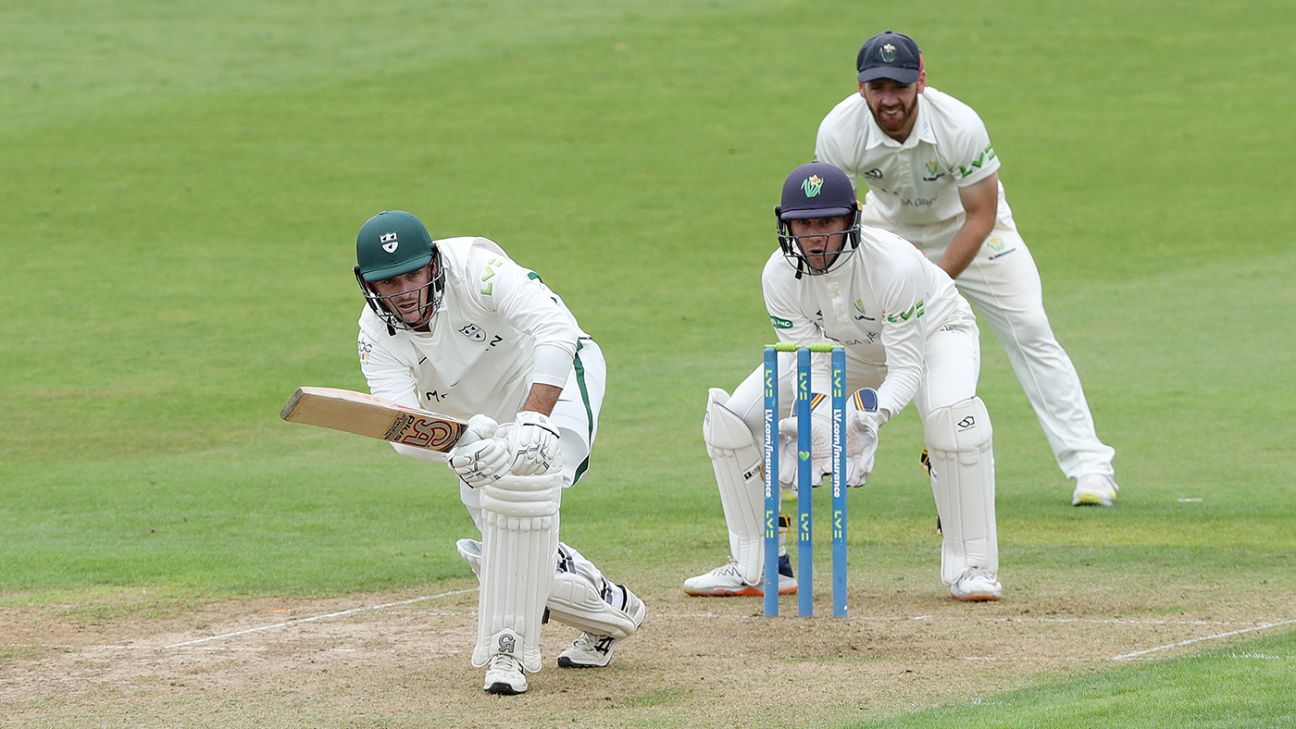 Gareth Roderick scored a career-best 172 not out to put Worcestershire in a commanding position against Glamorgan, on a day when rain meant only 68 overs were possible at Sophia Gardens.
His innings was the bedrock of a first-innings total of 454 for 9, with fast bowler Joe Leach offering plenty of support in an entertaining knock of 87, in a partnership of 167 which was an eighth-wicket record for Worcestershire against the Welsh County.
Glamorgan were boosted by the news off the field that the world’s second-ranked Test batsman, Marnus Labuschagne, had signed on to return for the next two seasons.
On the field they were boosted by the class of their late-season replacement for the Australian, India’s Shubman Gill who oozed quality on his way to 34 not out. Opener Ed Byrom scored 67 as Glamorgan closed on 111 for 2.

Glamorgan would have started the day with hopes of dismissing Worcestershire for around 300 in the overcast conditions, but instead the visitors kept building their score in Cardiff.

Roderick was at the centre of those efforts, but it was Leach who was the main aggressor on his way to 87 before being caught on the boundary hooking James Harris.

Roderick, who only came into the team when Pakistan star Azhar Ali failed a late fitness test on his hamstring, went on to record his first century for Worcestershire and seventh in first class cricket.

Worcestershire did not show any great sense of urgency, for instance bringing up the 350 in the 111th over when they would have earned an extra bonus point one over earlier.

Roderick, and his teammates, were clearly targeting his career-best score of 171 and indeed the declaration came as soon as he surpassed that mark. His unbeaten 172 came in 348 balls as Worcestershire finally declared on 454 for 9.

Timm van der Gugten finished with figures of 4 for 80 off 30 overs, the pick of the Glamorgan bowlers.

With the grey clouds intermingling with bright sunlight and wet weather predicted over the last two days of this match, the visiting side’s hopes of forcing victory may be confounded by a combination of rain and an increasingly flat pitch.

Worcestershire did indeed get the early breakthrough they wanted when Glamorgan captain David Lloyd chased a wide delivery from Ben Gibbon, only to be caught by Jack Haynes at third slip.

At the other end Ed Byrom was taking a great liking to the bowling, at one stage he had scored 38 out of a team total of 44. The highlight was a six over midwicket off Leach.

Gill looked totally assured once he arrived at the wicket and suddenly Glamorgan were scoring quickly from both ends. Byrom would have been disappointed to get out with just over three overs of the day remaining, caught behind off Gibbon.