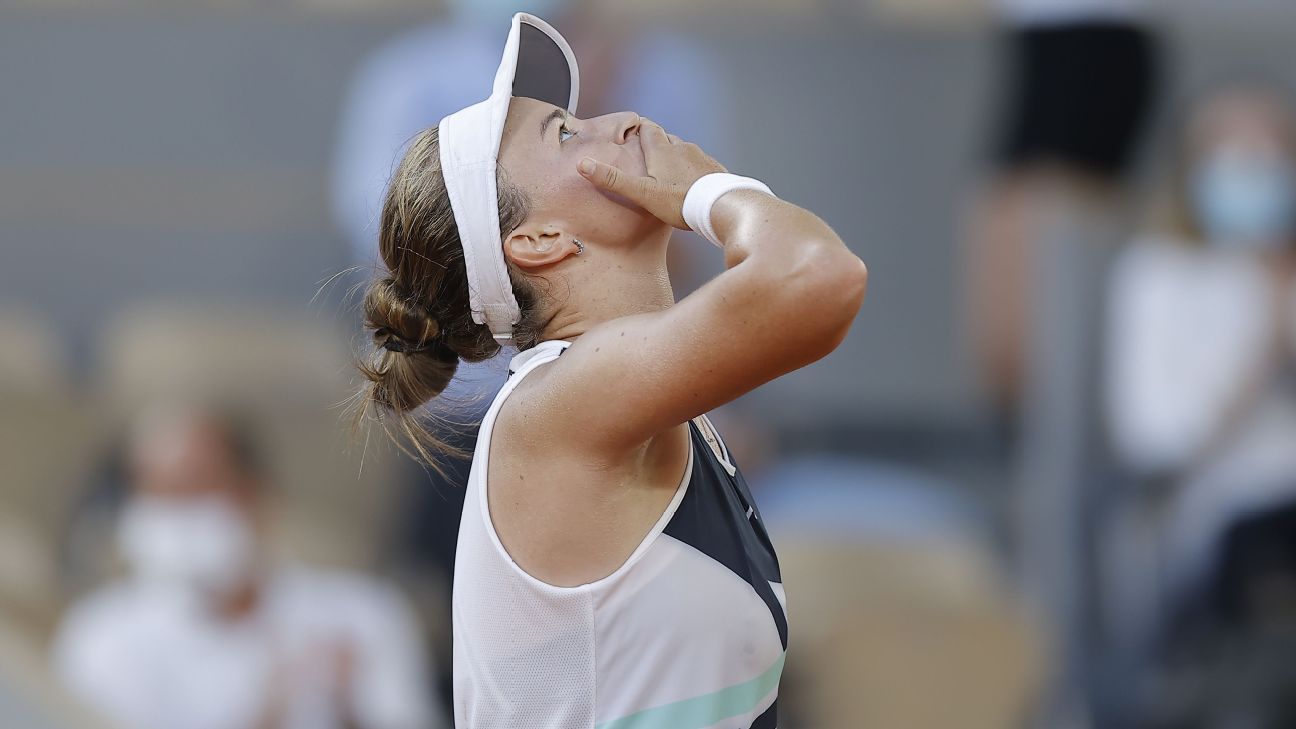 Anastasia Pavlyuchenkova needed more attempts to reach a Grand Slam final than any other woman in the Open Era.

Barbora Krejcikova had to get through the longest women’s semifinal match in the history of the French Open.

Now Pavlyuchenkova and Krejcikova, two of the unlikeliest finalists in recent memory, will battle Saturday in the 2021 French Open final, with each looking to win her first major singles title.

The two names might be surprising for those who haven’t been watching the tournament in Paris, but for Pavlyuchenkova and Krejcikova, it is something they’ve long known they were capable of and the end result of years of hard work and perseverance among sometimes less-than-stellar results.

“Fourteen-year-old me would tell me: ‘What took you so long?'” Pavlyuchenkova said Thursday.

For a time, Pavlyuchenkova’s place in major finals seemed all but certain. She was the top-ranked player in the world as a junior and a winner of three Grand Slam girls’ titles. She was given a wild card to the main draw at Wimbledon as a 15-year- old.

It didn’t take long for her game to translate at the professional level. Pavlyuchenkova reached the third round at Wimbledon in 2008, in just her second major main draw, with wins over Alize Cornet and Li Na. She made the semifinals at Indian Wells as a 17-year-old in 2009 and defeated Jelena Jankovic and Agnieszka Radwańska, both top-10 players, along the way. She was confident in her ability to replicate her success at the junior level as a pro when asked about it following her win over Jankovic.

“I finished No. 1 and I won quite a lot of tournaments, and I said I wish I could do it [at this level],” she said then. “I’m still thinking about it, so I still believe in it and I work for it.”

She won her first WTA title in Monterrey in 2010 and made her first major quarterfinals at the French Open in 2011. Her ranking soared to a career-high No. 13.

But ability and expectations don’t always align with reality.

Pavlyuchenkova has won 12 titles on tour, most recently in Strasbourg in 2018, all at the WTA 250 and 500 levels. She had reached the quarterfinals at majors six times but had never advanced further. She said her teenage confidence began to wane and she questioned whether she could compete among the WTA’s elite players.

“I had a lot of doubts because, let’s say I could beat a lot — not a lot, but top-10 players and make the quarterfinal of a major,” Pavlyuchenkova said Thursday. “I was very close to semifinals couple times, but then it wouldn’t happen. It was just up and down in terms of results. But I feel like I’m there, I can beat those players, but the consistency is off, something is always off.

“This was tough to deal with. I’m like, ‘OK, I feel I’m here,’ then no. Then again I’m here, then something. Those little puzzles were not coming together every time. I guess, yeah, maybe I had a lot of expectations, as well, that I couldn’t deal with over the years.”

It appears all the pieces of the puzzle have come together in Paris.

Buoyed by a semifinal run in Madrid, and having recently started working with a sports psychologist, Pavlyuchenkova has been unflappable on court. She defeated No. 3 seed Aryna Sabalenka 6-4, 2-6, 6-0 in the third round and followed up with a three-set win over two-time major champion Victoria Azarenka.

During Thursday’s semifinal, Pavlyuchenkova needed just over an hour and a half to seal the 7-5, 6-3 victory over Tamara Zidansek. She became the first Russian woman to reach a major final since Maria Sharapova in 2015.

When it was over, she didn’t show any outward signs of celebration. No “Come on!” scream. No jumping up and down. Not even a hint of a smile. But she said that wasn’t an indication of how she was feeling inside; it was simply how she felt in the moment.

“It’s been a long road,” Pavlyuchenkova said. “It’s been a lot of ups and downs. It’s been a tough one. I definitely didn’t expect this year being in the final. I guess you can’t expect those things. I was just there working hard, doing everything possible.

“I just said to myself, ‘You know what, this year let’s do whatever it takes, anything you can do to improve your game, your mentality.’ Started working with a sports psychologist, everything. Just I wanted to give it a try so I have no regrets after. That’s it.”

Krejcikova’s reaction after winning her match against Maria Sakkari on Thursday was significantly more animated. After a dramatic and intense battle lasting 3 hours, 18 minutes, she threw her arms wide above her head and her mouth dropped open in amazement. Down 3-5 in the third set, she saved match point and came back for a 7-5, 4-6, 9-7 victory.

Krejcikova, from the Czech Republic, has been fighting throughout her career. While many have labeled Krejcikova a doubles specialist because of her success with partner Katerina Siniakova, she has been working diligently to prove she can have the same results in singles.

Unlike Pavlyuchenkova, Krejcikova didn’t always have grand aspirations for her time in the sport. She enjoyed playing tennis but said it didn’t occur to her she could even play professionally until she was 16 or 17 and succeeding at the junior level. She achieved a No. 3 ranking in juniors and won the girls’ doubles titles at the French Open, Wimbledon and the US Open.

Her prowess in doubles continued once she turned professional. She and Siniakova reached the semifinals at Roland Garros in 2016, and two years later, the duo won the French Open and Wimbledon doubles title. By the end of 2018, they were the top-ranked doubles players in the world.

But Krejcikova struggled in singles, and being ranked outside of the top 100 meant she was unable to get automatic entry into Grand Slams. She failed to get through qualifying on her first 11 tries and still has never played singles at Wimbledon or the US Open. She didn’t make her main draw debut until the French Open in 2018. She lost in the first round.

Krejcikova didn’t record her first main draw victory until the 2020 Australian Open, which helped get her ranking up to No. 115 before the season’s suspension in March due to the pandemic. In fact, it was because of the virus and the absence of many players that she was able to get main draw entry to Roland Garros last October despite still not cracking the top 100. She made it to the fourth round — and that victory moved her to a then-career-high ranking of No. 85. She ended the year with a semifinal run at Linz.

It has been an upward trajectory ever since. Krejcikova reached the final at Dubai in March and won her first WTA singles title in Strasbourg last month. She arrived in Paris ranked No. 33 and is now projected to be just outside the top 20. She admitted It has been a long journey to get to this point.

“It was just taking so long,” Krejcikova said. “It just took me some time, but I think right now it’s actually right moment. Especially mentally, I think I’m just there. I really matured.

“I just really appreciate things a lot, especially after what I’ve gone through, also with this pandemic and everything. I don’t really know what I think. I’m just full of emotions right now.”

Krejcikova and Pavlyuchenkova have never played against one another in singles, but they have met twice in doubles with Krejcikova winning both matches.

Krejcikova said she hadn’t started thinking about how to handle Pavlyuchenkova’s powerful attacking style or how she could dictate the pace, as she has in so many of her matches. She said she was thinking only of her doubles semifinal Friday and was hopeful she could reach two Grand Slam finals in the same tournament.

No matter the outcome Saturday, Krejcikova insisted she was going to make the most of the experience and do what she always does.

Gab Marcotti’s players to know, cult heroes on all 24 teams