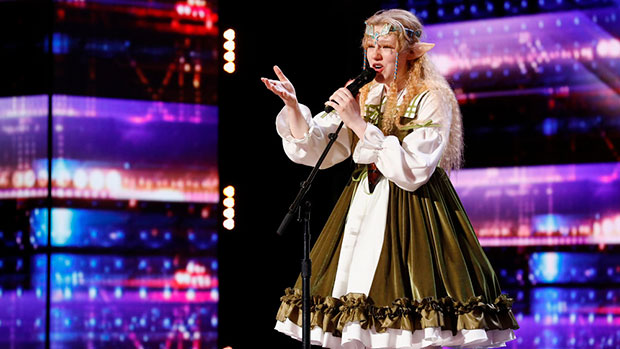 The America’s Got Talent auditions are winding down, but Freckled Zelda is ready to showcase her amazing talent to the judges. She’ll perform during the July 26 episode of AGT. She shows up dressed up as a woodland fairy and has pointy ears.

Freckled Zelda’s performance solidifies the performer as a force to be reckoned with in season 17. So, who is Freckled Zelda? HollywoodLife has rounded up everything you need to know about this “music fairy.”

1. Freckled Zelda is her new name.

Freckled Zelda is the pseudonym of Rachael Wilson. She tells the AGT judges that she’s a “music fairy” from the “Freckled Forest.” On her Instagram, Freckled Zelda reveals she’s actually from California.

During her audition, Freckled Zelda brings out her ocarina, also known as a “sweet potato flute.” The ocarina is a wind musical instrument. Her ocarina performances are available on Spotify.

Freckled Zelda performs “Colors of the Wind” from Pocahontas for her AGT audition. After her performance receives major praise from the crowd, Freckled Zelda begins to cry. “You’ve got a really good voice,” Simon Cowell tells her. However, he doesn’t think the ocarina is necessary. Freckled Zelda stressed that this is who she is, and she’s not going to change. Heidi Klum raves that she loves how Freckled Zelda is “unique and different.” The judges overwhelmingly send her to the next round.

Amanda Mammana: 5 Things About The Talented Singer With A Speech Impediment On ‘AGT’

4. Freckled Zelda is a TikTok star.

Freckled Zelda has over 7 million followers on TikTok and over 170 million likes. Her videos frequently get over 1 million views. She teased her appearance on AGT in a TikTok video. “They’ve never had a music fairy on AGT,” she said.

5. Freckled Zelda has released her own music.

Freckled Zelda released an EP back in 2021 that’s available on Spotify. Since then, she has released two singles: “I Feel Rather Sad” and “Stay Focused.”