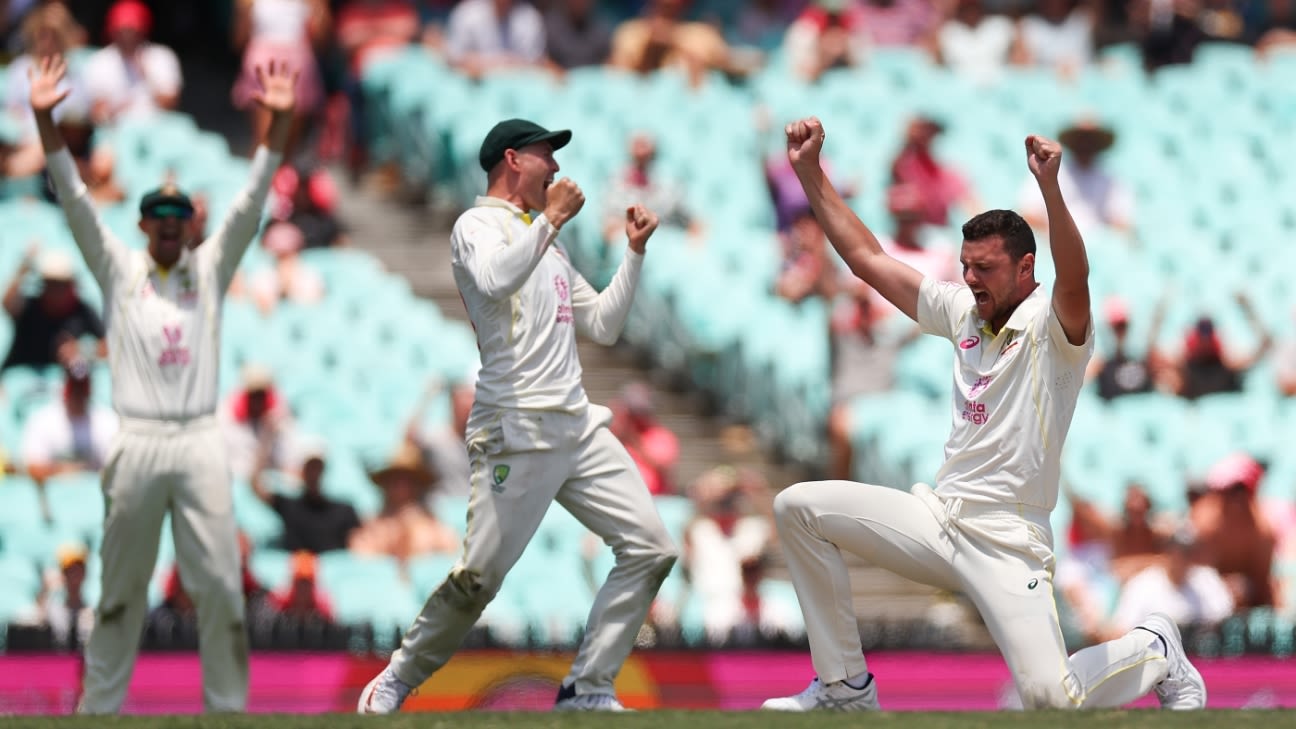 Josh Hazlewood starred after lunch on the fifth day to keep Australia’s bid for an improbable victory in the third Test, and a series sweep, alive as South Africa were made to follow-on at the SCG.

After losing just one wicket in the first session, South Africa were bowled out 45 minutes after lunch as they fell 21 runs short of avoiding the follow-on. South Africa will need to survive a minimum of 47 overs and there is only a small chance of rain forecast in Sydney for the rest of the day.

The pitch has played well and not deteriorated as expected although Nathan Lyon started producing sharp turn after lunch.

Before that, Australia had been left largely frustrated.

An 85-run partnership between Keshav Maharaj and Simon Harmer pushed South Africa close to the follow-on target and likely safety from a series whitewash. Maharaj reached his half-century on the first ball after lunch. He was making batting look rather easy, particularly effective on the short ball, until being trapped lbw by Hazlewood off a length ball tailing into off stump.

Runs suddenly dried up after that, and Harmer survived two tight lbw calls off Lyon that were unsuccessfully reviewed by Australia.

But his 164-ball defiance ended when he inside edged a Hazlewood delivery on to his stumps before Lyon wrapped up the innings with Rabada’s wicket.

Having been preferred over Scott Boland, Hazlewood repaid the faith of the selectors on his return after suffering a side strain against West Indies in the opening Test of the home season.

Australia chase quick wickets with time against them

Given their batting frailties, South Africa faced an uphill battle against a fired-up Australia attack. They had not drawn a Test in their last 43 matches dating back to 2017.

South Africa started the day precariously placed at 149 for 6 after Pat Cummins and Hazlewood bowled superbly late on day four in fading light.

But Marco Jansen and Harmer batted cautiously to defy Cummins and Lyon. Harmer scored the first runs of the day’s play off its 20th delivery, and shortly after, pulled Cummins to the boundary.

Jansen didn’t score until the 32nd ball he faced for the day, underlining his determination to play a rearguard role. He did occasionally nervously prod at Lyon, including a close shave when an inside edge took his pad and fell short of Steven Smith at slip.

Lyon, who has a modest record at the SCG, started from the get-go and targeted the footmarks outside off stump. He initially struggled with his accuracy before finding his radar but couldn’t find the breakthrough.

Just before the second new ball, Cummins turned to part-timer Travis Head, who dislodged Jansen, caught behind with a delivery outside off stump that stayed low.

Head continued to probe but chances were missed including a sharp return catch to reprieve Maharaj.

Cummins had no hesitation in taking the second new ball when it became available, and Hazlewood immediately conjured nasty bounce much like he had done the previous evening.

But runs also flowed in South Africa’s desperate attempt to pass the follow-on target with Maharaj counterattacking Cummins with several belligerent pull shots to the boundary.

Maharaj’s dismissal, however, triggered an all too familiar rush of wickets for South Africa to set up an intriguing finish.