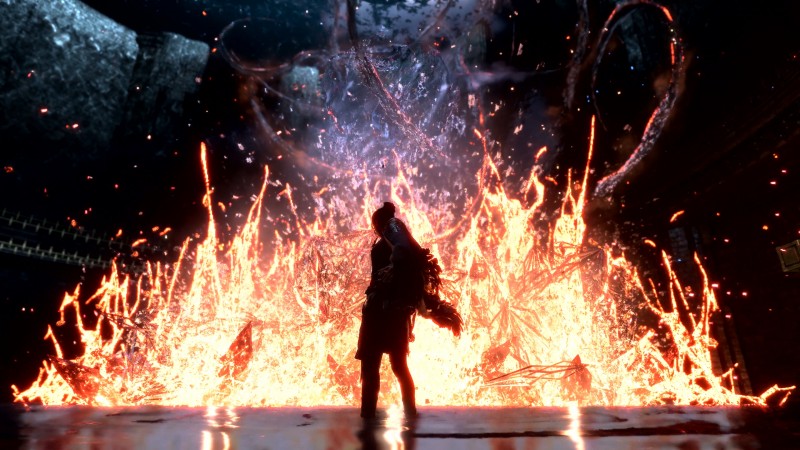 Forspoken is a game about movement and running. Protagonist Frey begins the game running from the law and debt collectors. She’s also in the middle of a plan to flee New York City with a gym bag full of cash. Amidst that chaos, she falls into the land of Athia and is eager to leave the new, mysterious world where she inexplicably has superhuman combat and running abilities. Getting from one place to another is Forspoken’s high point, and while no other element quite reaches the heights of how fun running and climbing are, Frey’s adventure isn’t without its highlights.

Unfortunately, Forspoken makes a bad first impression. Athia’s environments look great, as does Frey when she moves through the world, but zooming in close for cutscenes shows some rough textures. The dialogue is also underwhelming and the storytelling is overly transparent. From Frey’s cat, Homer, to the little girl who wins Frey’s heart by stealing her phone in Athia, every character’s role as a means to humanize Frey is too obvious, and her frequent and stubborn refusal of the hero’s call is hammered too hard. Thankfully, Forspoken’s story and dialogue improve the deeper you get.

By the end, I liked Frey’s overly vulgar and combative nature and her antagonistic relationship with Cuff, her invisible partner that lives on her wrist. I also enjoyed the zoomed-out main path of the story. None of the twists were particularly surprising, but they were well executed and helped contextualize why Frey is so angry and why she is so insistent on not being the hero, even when everything obviously demanded she moves in that direction. I was also happy with where the game leaves Frey at the end, both from a character relationship perspective and a continued post-game gameplay perspective.

Combat is consistently mediocre. Forspoken is an action game, but calling it a third-person shooter wouldn’t be out of line, as most of Frey’s abilities function like magical guns. Frey has dozens of abilities to swap between on the fly, and taking advantage of enemy vulnerabilities means you’re encouraged to do so often. I found a few I preferred, but success often meant switching to the sluggish weapon I didn’t particularly want to use. Changing abilities is convoluted; even late in the game, I had to pause and think about which buttons I needed to hold to access certain weapons.

The handful of bosses Frey encounters is also generally underwhelming. They feature interesting designs and attacks that look great in motion but leave little room for a tactical approach. I mostly just hit them with as many magic bullets as I could. The final boss does encourage some overdue strategy, and that spike in challenge made for my most memorable encounter.

Where the story and general combat are hit-and-miss, movement is excellent throughout. Sprinting through Athia and leaping over buildings feels great, and a handful of additional movement abilities make things even smoother. An early upgrade that lets Frey long jump with well-timed button presses makes her move even faster and smoother. I went out of my way to track down every movement upgrade, and nearly all of them were substantial and fun. That joy of movement integrates into combat, where even if shooting doesn’t feel great, dodging and leaping over enemy heads does.

Exploration is also enjoyable, thanks to a helpful automatic waypoint numbering system. On my way to a core destination, for example, I would mark a handful of locations to check out along the way and wouldn’t have to revert to the map much because of the numbers. Certain locations even allow you to do this by looking out into the distance without entering the map at all. Rewards are worthwhile, too, by offering new cloaks and items and even big stat boosts just for finding particular spots.

Forspoken’s story and combat fail to reach the heights of its movement and exploration, but thankfully those two latter elements make up most of the experience. I sprinted, often literally, through the campaign in about 15 hours, and now I have a large world filled with nooks and crannies I’m eager to run through and explore. The narrative won’t linger with me, and I avoided combat in the open world often, but I loved making Frey leap and fly through Athia to discover all its treasure chests and secrets.