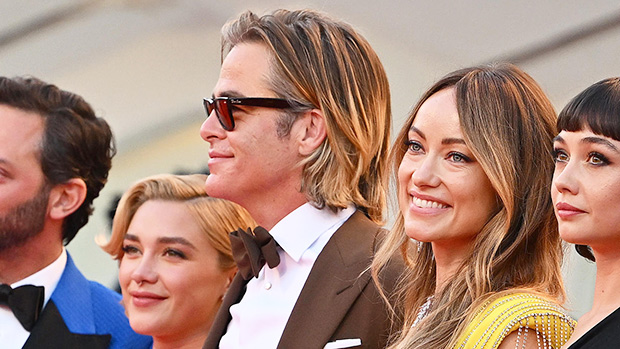 Fans of Florence Pugh are spreading evidence that the actress actually didn’t snub her Don’t Worry Darling director, Olivia Wilde, at the Venice Film Festival. One fan shared a video that shows Florence, 26, facing towards Olivia, 38, and clapping for her as the entire cast stood up for the standing ovation at the film’s screening on Monday, September 5. Gemma Chan, Harry Styles, and Chris Pine all stood in between the two women, who very clearly made eye contact and applauded one another in that brief moment from the video.

literal proof that the media is only showing us what makes them money: two successful women pitted against each other pic.twitter.com/jNDRZeB0ZS

There’s been nonstop media buzz about the rumored drama between Florence and Olivia that allegedly started on the film’s set. Florence only attended the red carpet premiere and screening for the film and skipped the press conference because she was en route from Budapest where she is currently filming Dune 2. But Florence’s absence from the press conference only reinforced the feud rumors that have been spreading all over the internet. The Oscar nominee also did not pose solely with Olivia or Harry on the red carpet.

At the press conference, a reporter asked Olivia if she had a “falling out” with the Black Widow star. But Olivia — who started dating Harry, 28, on the film’s set — responded by calling Florence “a force”, before adding, “As for all the endless tabloid gossip and all the noise out there, I mean, the internet feeds itself. I don’t feel the need to contribute. It’s sufficiently well nourished.”

There was also a viral moment involving Harry and Chris at the screening. A video shows the former One Direction member potentially spitting on his co-star as he sat down to watch the premiere of the film. Chris was seated between Harry and Olivia at the event. It’s worth noting that another video from a different angle seems to debunk the spitting claim.

Don’t Worry Darling has received mixed reviews from critics, with a 46% rating on Rotten Tomatoes as of the time of publishing this article. The psychological thriller is Olivia’s second directorial feature, following 2019’s Booksmart. Don’t Worry Darling will be released on September 23, 2022