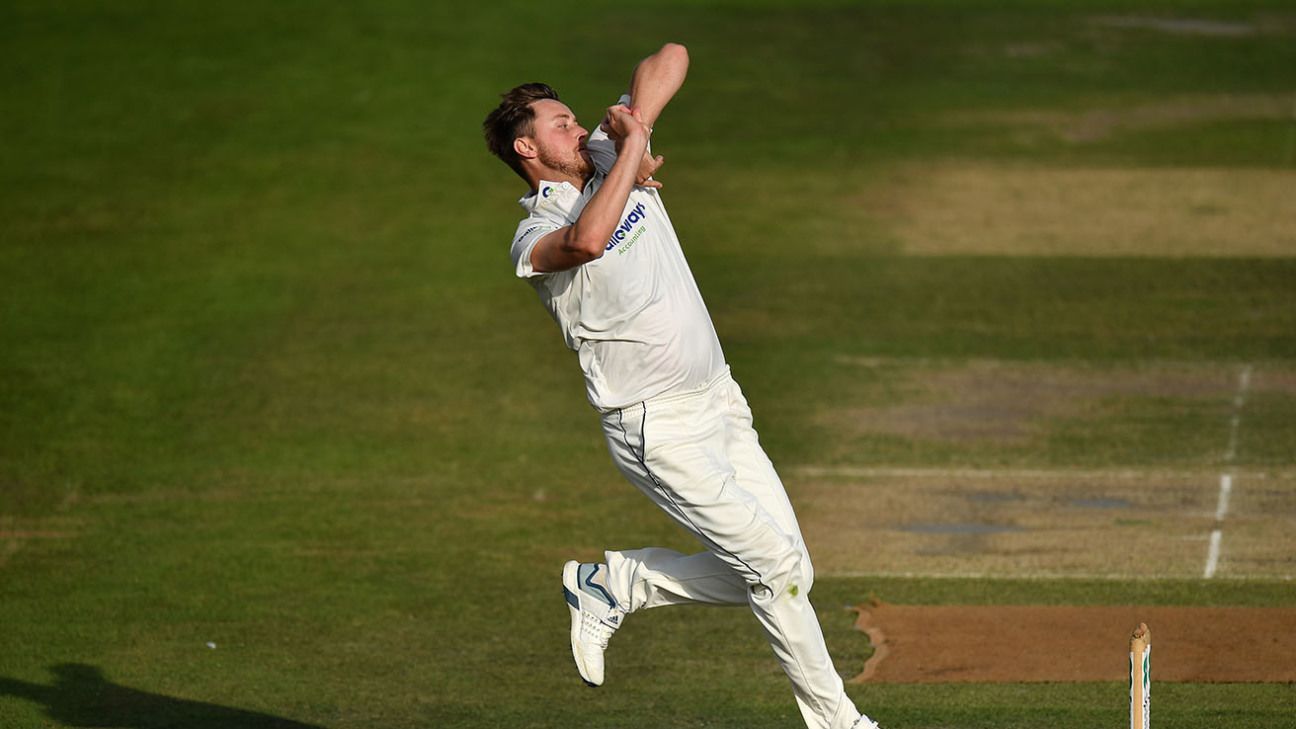 Ollie Robinson‘s prospects of bowling himself into contention for the opening Test against New Zealand took another backward step when what was officially described as a stomach upset restricted him to only one over against Leicestershire. What he consumed ahead of the game has not been divulged, but it is a fair bet that it was not an ECB-approved mix of piri-piri breaded tofu and cruciferous vegetables.

Fast food led to slow Robinson as he summoned up a single desultory over before leaving the field. He made a couple more shortlived fielding appearances later in the day, but none were long enough to bowl again. Fortunately for Sussex, Leicestershire’s innings developed a similarly pallid complexion as they subsided to 210 all out in 83.4 overs.

“What are we going to do about Ollie?” will be a question in the In Tray of Brendon McCullum as he takes up his role as England’s new Test coach. Sussex loyally claim that his fitness in county cricket has been exemplary, but the extra intensity of international cricket has caught him all too frequently short.

Since his fitness was openly brought into question at the end of England’s Ashes series, he has missed all three Tests in the West Indies because of a back spasm in the warm-up match in Antigua, and been refused permission to play in Sussex’s Championship match against Worcestershire because his fitness levels were unsatisfactory – something he blamed on a tooth infection. Nobody said what tooth it was, but as he appears to be undermining his own career it was unlikely to be a wisdom tooth.

In his solitary Championship match, against Middlesex at Hove last week, Robinson took seven wickets. He appears to be a bowler who gets fit by bowling, an old-fashioned concept, but in many ways he is an old-fashioned cricketer. A casual look suggested he did look in need of an over or two. To deny him cricket at Worcester because he was not fit enough might well be viewed as a hard lesson, but the approach could prove to be largely counterproductive. Where should dictates begin and end? McCullum may have a view.

Leicestershire have reached 300 only once all season, and their only hundred in a season in which the other 17 counties have racked up 94 between them was a match-saving affair by Hassan Azad against Worcestershire. This offered an opportunity to Robinson for something eye-catching, even allowing for the fact that this is a match between the Second Division’s bottom two, and so even if he had taken a 10-for, the clips would have brought paroxysms of rage from Kevin Pietersen on social media with cries of: “Look at the batting!”

“Look at the batting!” would have been an appropriate response, come to think of it, for several of the dismissals as Leicestershire, 69 for 1 with lunch approaching, contrived to lose seven wickets for 75 in 26 overs. In Robinson’s absence, Aaron Beard, an Essex loanee, and Henry Crocombe bowled with commendable energy to take three wickets each.

Robinson’s talent is abundant – a Test and first-class average of 21 testifies to that – but he must be fit enough as a third seamer to bowl more than 20 overs a day, especially as England have no recourse to a reliable holding spinner. With James Anderson and Stuart Broad approaching an age when some people are already considering a re-run of an old Midsomer Murders, they cannot be expected to pick up any slack.

With George Garton absent again because of the effects of long Covid, Mohammad Rizwan withdrawing due to a family bereavement and Mason Crane recalled by Hampshire, Sussex were up against it. The captain, Tom Haines, was forced to employ his own medium pace, with the keeper standing up, within the first hour.

Crocombe had Sam Evans caught at second slip, but Leicestershire were within an over of lunch, with Azad and Rishi Patel looking untroubled, when they contrived one of the slackest run-outs of the season. The cover region was entirely unmanned as Azad pushed the ball firmly enough to point, but Patel half-heartedly opted for a single, Azad, whose running between the wickets can be a bit of a liability, wasn’t sure at all, and Tom Alsop dashed from first slip to pick up and throw down the stumps at the bowler’s end with Azad well short.

Considering that Leicestershire had suffered three first-innings run-outs against Glamorgan last week, Azad among them, the waste was criminal. Patel followed soon after lunch to a good, back-of-a-length ball from Beard, and another catch at second slip for Tom Clark.

Leicestershire have given away 4,000 free tickets for this match, many of them to schools, and judging by the squeals of delight that had met the team announcement at 10.40am, Patel was something of a favourite so his departure was a disappointment. In The Meet, the favoured haunt of more sedentary observers, team announcements have occasionally brought a momentary pause in the chewing of a sausage sandwich, but squeals have not been logged, and it was good to see the outfield swarming with children playing Kwik Cricket at the lunch interval.

Leicestershire’s shot-making afterwards did not go so well. Colin Ackermann chopped a little inducker from Haines into his stumps and Lewis Hill’s run-a-ball 35 ended with an uncontrolled leaping cut at Crocombe and a decent, leaping catch by Archie Lenham at square third man.

Harry Swindells was lbw on the back leg to Delray Rawlins, who also had the South African Wiaan Mulder caught down the leg-side. Ben Mike fell for nought, trying to force a Crocombe delivery off the back foot and edging to first slip. Callum Parkinson’s unbeaten 32 served as a suitable comment on the inadequacies of what had gone before and he reinforced that after the close.

“A frustrating day because we’re repeating errors – we had the game by the scruff of the neck at 69-1, but then we have a soft run-out and a couple of soft dismissals and we’re on the back foot,” he said.

“We’ve got to give ourselves a chance to get into games and you don’t often do that when you don’t score big first innings runs. It felt like a decent pitch to bat on. We just have to do the basics better.”

Neither side will want to end the first phase of the Championship – this is the penultimate round of seven – without a win to their name. It was Sussex who closed the first day the more confident of achieving breaking their duck. And, in the second innings, who knows, a revitalised Robinson to come.