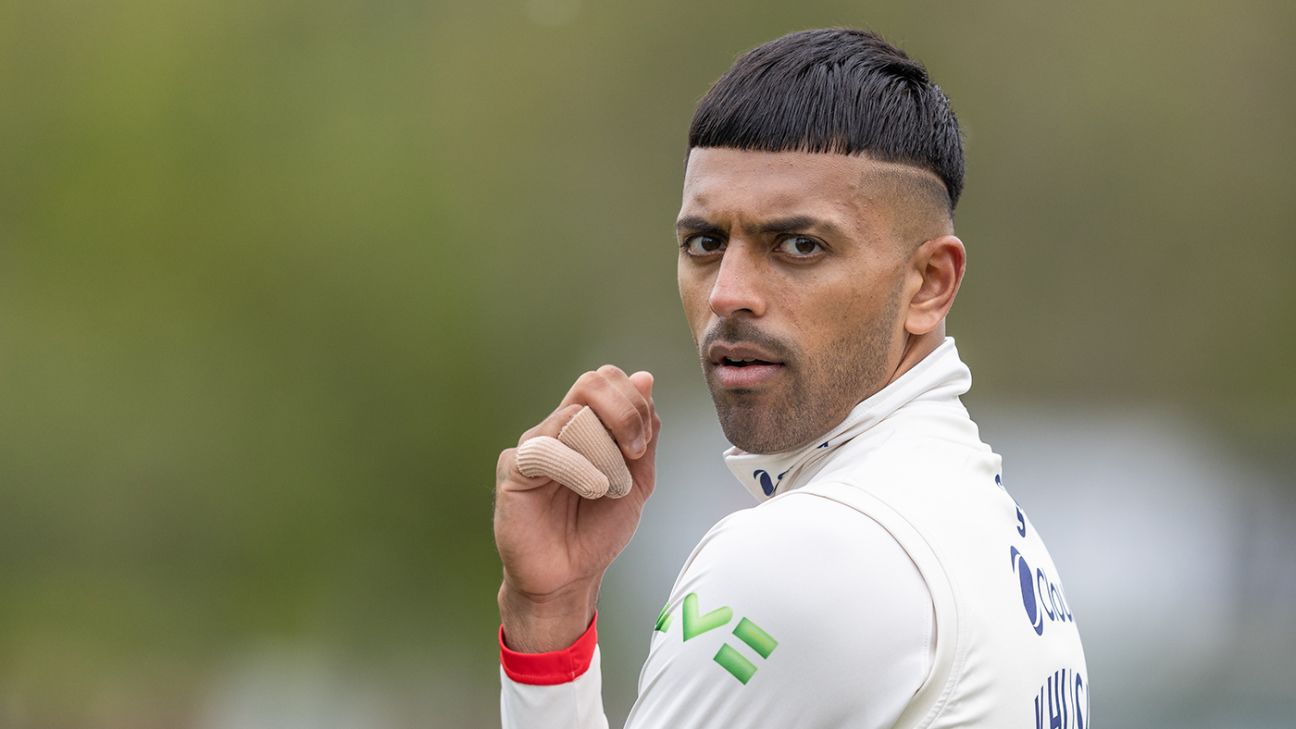 It has been Feroze Khushi’s misfortune that until now the most national attention his career had attracted was when beer was heedlessly sprayed over him during Essex’s balcony celebrations after winning the Bob Willis Trophy two years ago.

Khushi visibly recoiled at what he later dismissed as “just a silly mistake”. He had to withstand scrutiny from within the Muslim cricket community and from some members of his wider family. Not to mention the debate in the media and on social media.

Kent at Canterbury in September 2022 is the time when, rightfully, he put all that behind him. He was in princely form during the Royal London Cup, collecting two hundreds, and has now added a maiden Championship hundred – 164 from 228 balls from No.6 in a measured innings that insisted he deserves a regular run in the four-day side. That run should arguably have come already.

After dabbing Joe Denly wide of short third man to secure his hundred, Khushi shared a brief hug of congratulation from Ben Allison, whose own maiden half-century at No.9 had provided the support he needed, and then quietly bowled his forehead to the ground in an act of sajdah.

Should liquid refreshment be required for a celebration, there are advantages of Kent having a supermarket on the edge of the ground these days, as they do a very good line in Cocoa and Coconut Rooibos Infusion.

Kushi said: “I’ve had a couple of good celebrations this year. I obviously lay flat thanking God as well, because without Him nothing would happen and without my parents’ hard work this success wouldn’t be possible, so I always keep them in my thoughts. I pride myself on my beliefs as well. It’s very important for me, being a Muslim and a British Pakistani. I’m very thankful and appreciative of my form at the moment. I’m doing quite well and I hope it can continue.”

Kent’s loss of four wickets in the last 25 overs of the day have left them under pressure entering the third day, especially as their skipper, Sam Billings, has popped a groin and will take no further part. They will be grateful for forecasts of that rare thing in Kent this summer – rain – on the final day.
Three wickets fell to the new ball: the most wasteful, Ollie Robinson, who drove Jamie Porter to cover; the best catch, a one-handed scoop by Adam Rossington as Sam Cook left Daniel Bell-Drummond slightly; the most unexpected, the sight of Ben Compton being bowled behind his legs while jazz sounded from the Cowdrey Suite. Cook’s dismissal of Denly came in marginal light.
While Essex’s fortunes fluctuated around him, Khushi’s constant tread remained unimpaired. He was 46 overnight and saw Matt Critchley miss out on his own century ambitions when he contrived to flick a wide leg-side delivery from Bell-Drummond to the wicketkeeper.

Brief flurries from Rossington, who pulled Bell-Drummond to deep midwicket, and Shane Snater – whose 11 from eight balls ended with a leading edge to mid-off as he flicked Harry Podmore to leg – added to the pressure, three wickets lost for 17 in 19 balls. Khushi was only on 71 when Allison joined him and it appeared that Essex, at 383 for 7, had an appetite for rapid progress. But it emerged that such thoughts were only in the heads of Rossington and Snater, and normal service then ensued.

Kent were led by a stand-in captain, Jack Leaning, and his options were limited by a back strain for Matt Milnes, who managed just 14 overs on the opening day and was prevented from bowling on the resumption. Milnes will have a precautionary scan and, as he is departing for Yorkshire at the end of the season, it is entirely possible that Kent have seen the last of him.

It was left to Podmore to sum up the demands on Kent’s weakened attack. “It’s been 17 weeks since I bowled more than ten overs so 32 was a bit of a shock to the system,” he said. “I’m looking forward to going to sleep tonight.”

With no specialist spinner, such as Hamidullah Qadri, in the side, Kent’s attack became a vapid affair on a benign surface. When Khushi laced Grant Stewart through extra cover, it was a rare act of aggression. His method remained ingrained, despite a growing sense that his singles were appearing at the start of overs rather than the end. At lunch he was still 14 short of his hundred.

An edged boundary against Quinn helped him settle into the afternoon, but there was a further delay, on 97, when Quinn struck Allison on the helmet as he tried to hook. Khushi then timed a full-blooded off-drive against Harry Podmore to mid-off. Meanwhile, Allison was serenely driving boundaries without concern. At that moment, the maiden century appeared to be far from certain, but Leaning turned to Denly’s leg spin with him on 99 and one ball was enough to reward his labours.

His maiden hundred achieved, life instantly became easier, the rest of his runs coming at around a run a ball. Kent’s spinners had a slow over-rate to address and runs were calmly collected. That Khushi has big shots, too, was exemplified by a straight six against Denly which landed in the top deck of the Woolley stand and was politely tossed back by a man in a natty Panama hat. A Denly googly ended Allison’s best on 53, before Cook hit around him to good effect.

Essex by now were so dominant that the last three wickets had added 190 in 50 overs. Khushi was last out, trying to slog Podmore down the ground – Leaning clinging on despite a collision with Grant Stewart. If his final act had been one of unabashed aggression, it was his cogency that had caught the eye. Anthony McGrath, his coach, once told him that he had the ability to play for England. At least now he should get the chance to play for Essex.