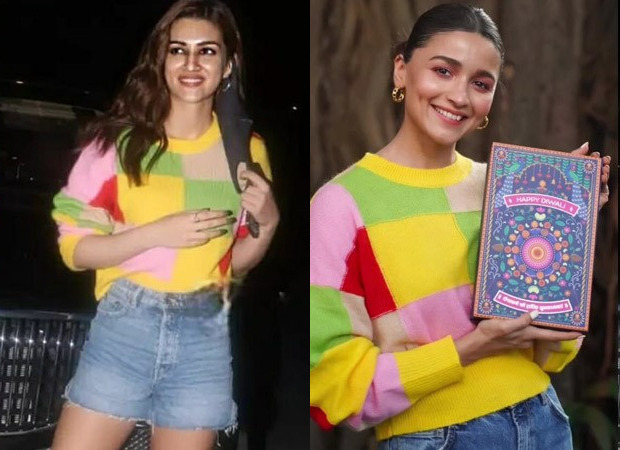 Kriti Sanon gave a smashing performance in Mimi. The actress starred in a solo lead female centric film and earned raving reviews from audiences and critics. The actress is currently busy with the promotions of her film Hum Do Hamare Do and is also prepping for Ganapath. Alia made her debut with Student of the Year alongside Varun Dhawan. She has done some exemplary work and create a niche for herself with her stellar performances.

More recently Alia Bhatt and Kriti Sanon were spotted in the same outfit at different times and here we look at who wore it best.

Kriti Sanon recently wore a multi-coloured Tee with blue denim shorts as she was papped while carrying a leg injury which was reportedly while she was prepping for Ganapath. Now Alia Bhatt was also spotted in the same outfit and it has the fans wondering who carried it better. While Kriti’s height, open hair and wonderful smile made her look beautiful Alia’s bun and smile made her look cuter.

Kriti will be starring in a mythological film for the first time in Adipurush. The actress will also be seen performing action sequences in the much-awaited film Ganapath. Adipurush, Bhediya, Bachchan Pandey, Ganapath and Hum Do Hamare Do makeup the envious lineup of Kriti’s upcoming films.

Alia on the other hand, finished work on Sanjay Leela Bhansali’s Gangubai Kathiawadi– based on Husain Zaidi’s popular book ‘Mafia Queens’. She has her multi starrer big released lined up next, directed by her close pal Ayaan Mukherjee, starring her beau Ranbir Kapoor, Big B and Mouni Roy in pivotal roles. She will also be seen in Rocky Aur Rani Ki Prem Kahani.

Also Read: Jacqueline Fernandez is the centre of attention with her new jaw dropping pictures