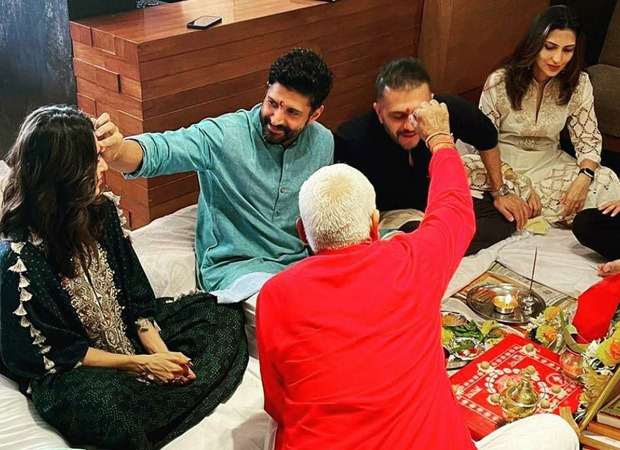 Actor Farhan Akhtar along with his girlfriend VJ Shibani Dandekar hosted a Diwali pooja at his office yesterday. For the unversed, Farhan and Shibani have been in a relationship for three years now. The ceremony was attended by family members of Farhan, the office members and some of his close friends. Sharing a glimpse of the puja, Farhan took to his Instagram and shared a picture.

In the picture, Farhan Akhtar and Shibani Dandekar can be seen sitting next to each other. Apart from them, his company Excel Entertainment’s co-founder Ritesh Sidhwani could be also seen. What stole the show and grabbed the attention of the netizens is Farhan smiling widely as he applied a tika on Shibani’s forehead. Farhan can be seen donning a blue kurta with white pyjamas and Shibani opted for a dark green ethnic dress.

Sharing the image, Farhan wrote “Happy Diwali.” Shibani, on her Instagram page, shared the same photo and captioned it, “To a festival full of sweets, memories and smiles! Happy Diwali with my @faroutakhtar.”

ALSO READ:Farhan Akhtar says Jee Le Zaraa is an attempt to see the world through women’s point of view