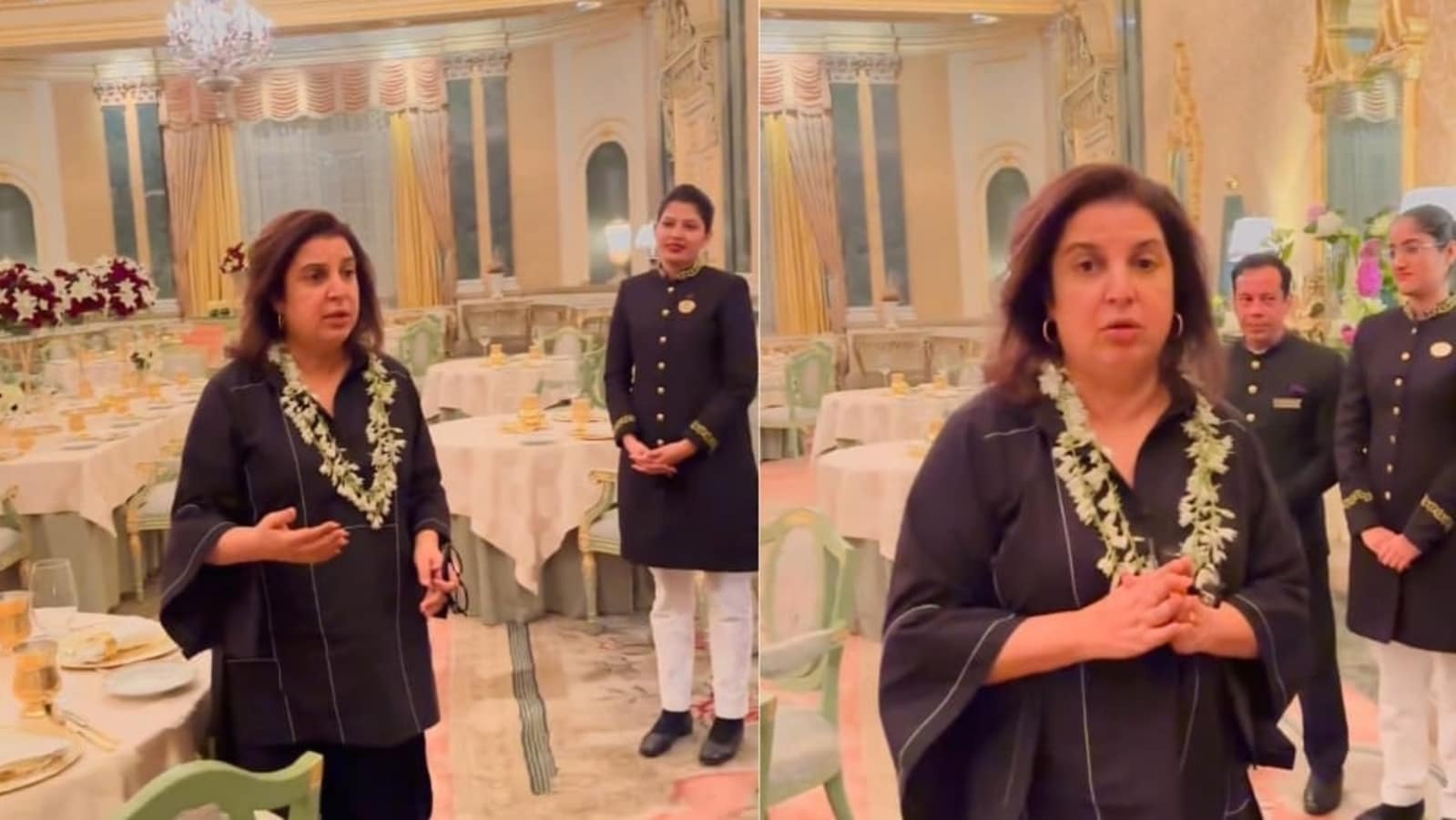 Farah Khan shared a glimpse of her recent Rajasthan holiday on Instagram Reels. The filmmaker shared a hilarious video of herself walking into an empty restaurant at a lavish hotel, and being told by the staff that they had opened it ‘exclusively for her’. While Farah was wonderstruck by their gesture, she had one question for them: ‘Who will foot the bill?” Also read: Anil Kapoor teases Farah Khan ‘kya craze hai tera’ as they pose at his birthday bash with Jackie Shroff. Watch

The video stars with Farah entering the restaurant at Rambagh Palace, Jaipur, and greeting the staff, “Namaste, namaste. Wow, itna bada (such a big) welcome. Yeh restaurant itna khali kyun hai aaj (why is the restaurant empty today)?” When a restaurant host told her, “Ma’am yeh aaj aap ke liye khola hai (we have opened the restaurant only for you)… It is exclusively for you,” Farah looked shocked. She then said looking into the camera, “Yeh poora restaurant mere liye open kiya hai? Wow, but bill kaun bharega (the entire restaurant has been open exclusively for me? Who will pay the bill?)”

Sharing the video, Farah wrote in the caption, “You know it’s Jaipur hospitality, when they open a restaurant just for you!! Thank you…” She wore a black ethnic outfit in the video. Commenting on her Instagram Reels, actor Gauahar Khan wrote, “Hahahah! Wonderful,” A fan commented, “Only you can do this!!!!” A comment also read, “VVIP treatment, of course, not for everyone…” A fan praised Farah’s acting skills, and commented, “You must act more… kya aura hain (what an aura)… awesome… someone should make a film with you, Sanjay Dutt and Jaggu dada (Jackie Shroff).”

Last month, Farah was in Qatar for the FIFA World Cup final, which she watched with son Czar. She treated her son to the ‘best seats’ at the stadium in Doha, and in return he pressed her feet. Taking to Instagram Stories, Farah had shared a picture of Czar, in an Argentina jersey, massaging her feet as she sat on the bed after the match. Sharing it she wrote, “Czar paying for the great seats his mother got him…” Sharing the same photo as a post, Farah wrote, “Morning practice (laughing emoji), world cup khatam ho gaya beta (world cup has ended, son).” Farah and filmmaker Shirish Kunder married on December 9, 2004. They became parents to triplets – son Czar and daughters Diva and Anya – in 2008 via in vitro fertilisation.