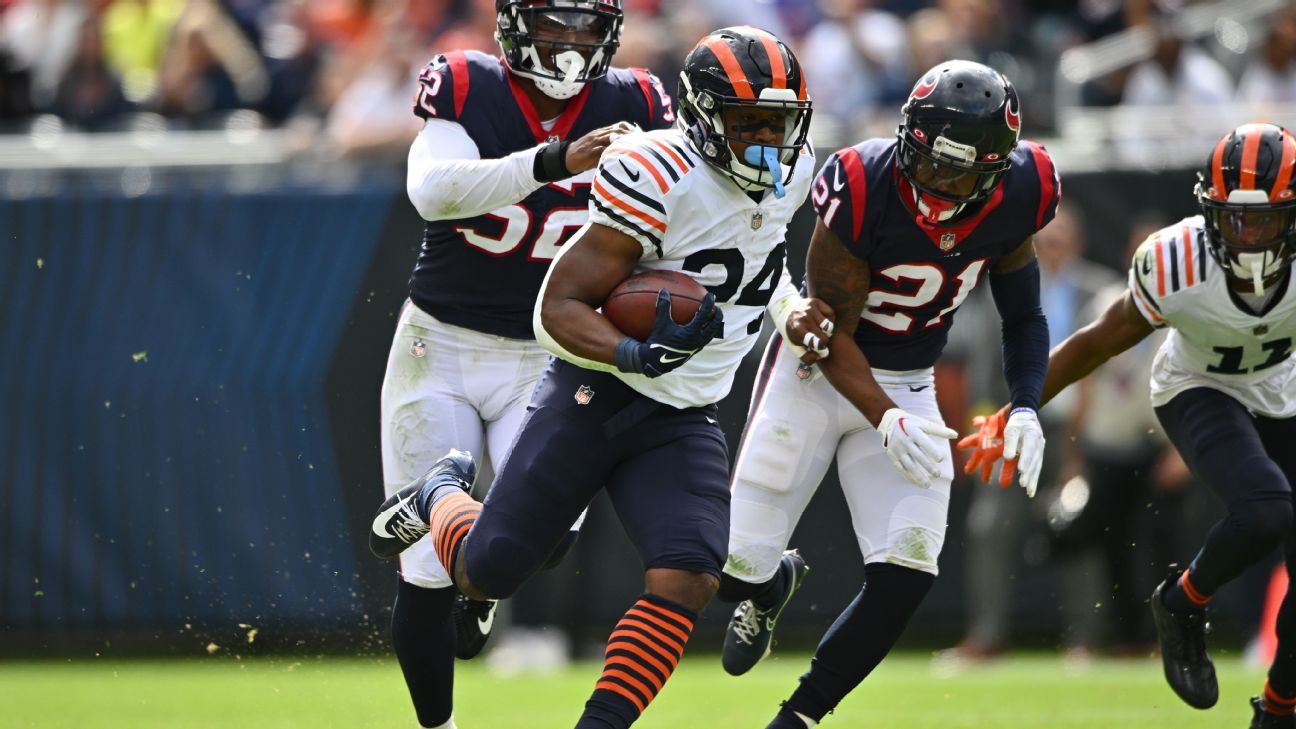 An exciting Week 3 of the NFL season culminates with a Monday night matchup between the Dallas Cowboys and the New York Giants.

Week 3 was a wild ride for fantasy football managers. Let’s take note of some of the highlights:

With all of that excitement in the rearview mirror, let’s take a look ahead to Week 4 and our recommended ESPN Fantasy waiver-wire adds.

Trevor Lawrence, Jacksonville Jaguars (50.9% rostered in ESPN leagues): The Jaguars are just the second team in the Super Bowl era to win consecutive games by 24 or more points as an underdog in both games. After a suboptimal rookie season, Lawrence looks to be on his way to a bright future under new head coach Doug Pederson. This season, he has averaged 21.8 fantasy points per game. Lawrence is positioned for success with receiving playmakers Christian Kirk, Zay Jones and Evan Engram. He can be viewed as a high-end QB2.

Kenny Pickett, Pittsburgh Steelers (4.0%): Pickett should take over as the starter for the Steelers sooner rather than later. When he does, he’ll have an abundance of receiving playmakers to target. One observation I had from after Pittsburgh’s Thursday night game against Cleveland was that Mitch Trubisky again struggled mightily throwing from the pocket. A successful NFL quarterback must be able to step up and throw in the pocket. From a film perspective, Pickett had very good pocket awareness in college, culminating in the 2021 season in which he averaged 286 passing yards per game and completed 73% of his passes when throwing from the pocket. Now is the time for fantasy managers to stash him in 2-QB or superflex leagues.

Khalil Herbert, Chicago Bears (25.2%): Herbert entered Week 3 averaging nearly a fantasy point per touch. Herbert hit the ground running (no pun intended) taking over for David Montgomery against the Texans after he was ruled out with ankle and knee injuries. When Montgomery was out last season, Herbert averaged 23.3 opportunities (rushing attempts plus targets) and 15.4 fantasy points per game while playing on 83% of offensive snaps over three starts. If Montgomery remains out, Herbert is a must-start against the Giants in Week 4. Even if Montgomery is active, Herbert is still an upside flex option.

Liz Loza breaks down Khalil Herbert’s fantasy performance against the Texans and what to expect going forward.

Jamaal Williams, Detroit Lions (44.3%): Williams rushed for 87 yards and two touchdowns on 20 attempts against the Vikings on Sunday. In addition, he had two receptions for 20 yards. It was the first game this season in which Williams has surpassed D’Andre Swift in rushing yards. Swift suffered a shoulder sprain against Minnesota. It’s not expected to require surgery, but he might miss some time. There is no question that Williams can fill the void for the Lions. Over the course of his career, he has had at least 15 touches in 23 games. In those games, Williams has averaged 19.5 touches, 96.5 total yards and 16.6 fantasy points. He can be viewed as an RB2.

Alexander Mattison, Minnesota Vikings (37.1%): After Dalvin Cook left Sunday’s game against the Lions because of a shoulder injury of his own, Mattison stepped up. On seven carries, he rushed for 28 yards and a touchdown, also catching a pass for 16 yards. If Cook misses Week 4 against the Saints, Mattison is a must-add considering his history. Mattison has started six career games when Cook has been inactive. In those games, he’s averaged 23.3 touches, 115.5 total yards and 20.1 fantasy points. Mattison can be viewed as a low-end RB1 if Cook is inactive, and as more of a flex option if Cook plays.

Samaje Perine, Cincinnati Bengals (3.7%): Joe Mixon‘s ankle still seemed to be bothering him against the Jets on Sunday — so much so that he left the game in the third quarter. Perine stepped up, ultimately rushing for 47 yards on nine attempts. Mixon played on 64.2% of the snaps, while Perine played on only 34.3%. The Bengals play the Dolphins on Thursday night. Perine could be a valuable waiver-wire pickup if Mixon is ruled out. Through three games, Mixon has averaged 23.7 touches.

Quick hit: Even though Atlanta’s revamped offense is centered around Cordarrelle Patterson, I still envision the Falcons “managing” his workload. This would allow Tyler Allgeier (18.7%) to see more touches. It would be wise to stash the rookie now.

Romeo Doubs, Green Bay Packers (16.1%): Packers head coach Matt LaFleur expected Doubs to play a bigger role in Week 3, and that’s exactly what happened with Sammy Watkins and Christian Watson both injured. He became the first Packers wide receiver not named Davante Adams to record eight receptions in a game since Randall Cobb did so in Week 1 of 2018. Doubs also became the first rookie wide receiver to catch a touchdown pass from Aaron Rodgers since 2018. It’s only going to get better going forward. In Week 4, the Patriots’ secondary presents a challenging matchup for Doubs. That said, fantasy managers can still consider him a flex option.

Field Yates discusses why Romeo Doubs would be a good waiver-wire add in fantasy.

Zay Jones, Jacksonville Jaguars (8.6%): Jones has amassed 24 targets through three games and leads the team in receptions (19). On both short and intermediate routes, Lawrence has looked for him quite a bit. Jones had his first receiving touchdown of the season on Sunday against the Chargers. He hasn’t had multiple touchdowns in a season since 2018 as a member of the Bills. Jones is another member of the Jaguars who is flourishing under Pederson’s coaching style. Jones can be viewed as a weekly flex option.

Joshua Palmer, Los Angeles Chargers (36.3%): Palmer performed well for the second consecutive week without Keenan Allen. He led the Chargers in offensive snaps, routes run, targets and receiving yards. Once Allen returns, Palmer’s targets will diminish, but the second-year receiver has performed well enough to receive a steady stream of opportunities. As a WR4/flex option in deeper formats, he’s great to have on your roster. His fantasy value would skyrocket if either Allen or Mike Williams end up missing significant time.

It’s not too late to play with friends and family. Draft a league now and start fresh with a 0-0 record and a shortened schedule. New league weeks start every Thursday with TNF kickoff. Get started >>

Quick hits: Treylon Burks (58.5%) of the Titans didn’t have a breakthrough performance against the Raiders this week. He had only two targets. Burks, however, led his team in routes run. … Russell Gage of the Tampa Bay Buccaneers (55.4%) had a great showing against the Packers. Because of the team’s many WR injuries, Gage saw 13 targets on Sunday and his performance helped build chemistry and trust with Tom Brady. Gage will continue to be involved in the Buccaneers’ passing game, especially with Julio Jones dealing with a partially torn posterior cruciate ligament. … Also, don’t forget about Greg Dortch of the Arizona Cardinals (7.3%), who has averaged 15.3 fantasy points per game this season.

David Njoku, Cleveland Browns (32.7%): Last Thursday night, Njoku caught 9 of 10 targets for 89 yards and a touchdown, setting a career high. His performance was notable since, entering the game, Njoku had only seen six targets, catching only four of those passes for 39 receiving yards. After Amari Cooper, he was the second-leading receiver for the Browns against the Steelers. The Falcons present a plus matchup for Njoku in Week 4. Given how desolate the TE position can be for fantasy managers once you get past Travis Kelce and Mark Andrews, Njoku can be considered a low-end TE1.

Tyler Conklin, New York Jets (11.5%): Conklin played on more snaps against the Bengals than did C.J. Uzomah, who returned from a hamstring injury. Conklin finished with eight targets and led the Jets with 84 receiving yards. He’s playing on a lot of snaps and running a lot of routes. Through three games, Conklin is averaging 8.0 targets and 12.7 fantasy points. In Week 4, he’s on the streaming radar against the Steelers.