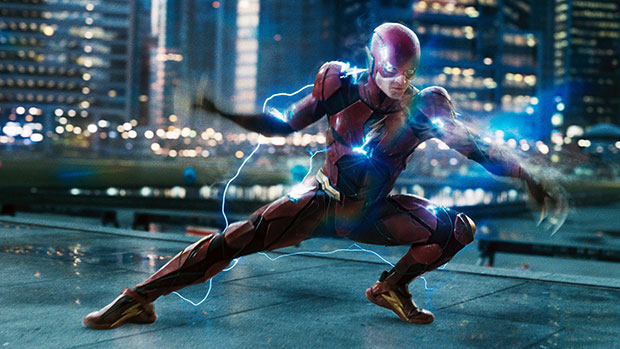 The Flash is one of the most highly-anticipated upcoming superhero movies. The Warner Bros. project has already wrapped filming with Ezra Miller playing the titular character. But the film’s fate is now up in the air due to controversy surrounding Ezra. The 29-year-old actor (who uses they/them pronouns) has been arrested several times, with more troubling accusations continuing to mount against them — and they are now seeking “ongoing” mental health treatment as the allegations continue to mount. The Flash is supposed to be a game-changing film for the DC Extended Universe and fans have been dying to see it in theaters. Unfortunately, there’s a strong possibility that the movie never sees the light of day.

Below, HollywoodLife has rounded up everything you need to know about The Flash‘s current status. Plus, we’ve got all the updates on Ezra’s controversies and how they’ve caused an impact on the film’s release.

What is Ezra Miller Famous For?

Ezra Miller was born in New Jersey and dropped out of high school to pursue an acting career. Their first movie was the 2008 drama film Afterschool. Ezra followed that up with the movies We Need to Talk About Kevin, The Perks of Being a Wallflower, and Trainwreck. The actor played Credence Barebone/Aurelius Dumbledore in Disney’s Fantastic Beasts franchise. Ezra’s most notable television role was the CBS miniseries The Stand. They also appeared in episodes of Royal Pains on USA Network.

The very first time that Ezra was arrested was in June 2011 when they were filming Perks of Being a Wallflower. Ezra was reportedly a passenger in a vehicle pulled over for a broken brake light in Pittsburg. Authorities discovered that Ezra allegedly had marijuana in their possession and charged the actor with drug possession. But the charges were eventually dropped and Ezra paid a $600 penalty, according to BuzzFeed News.

Ezra was arrested two more times in March and April 2022. The first arrest occurred on March 28 after an alleged physical altercation ensued between Ezra and other people at a karaoke bar in Hawaii. Ezra was charged with disorderly conduct and harassment. On April 19, Ezra was arrested again in Hawaii on suspicion of assault after allegedly throwing a chair at a 26-year-old woman. They pleaded no contest to disorderly conduct and was ordered to pay a $500 fine. In a plea deal, prosecutors dropped the harassment charge and an unrelated traffic charge.

In June 2022, Ezra was accused of harassing a 12-year-old child, Tokata “Gibson” Iron Eyes. The child’s parents filed a temporary harassment prevention order for Gibson and Gibson’s mother against Ezra in Massachusetts, which was granted. In court documents, the parents said, “Ezra uses violence, intimidation, threat of violence, fear, paranoia, delusions and drugs to hold sway over a young adolescent Tokata Ezra has brainwashed Tokata. Ezra Miller has ensured that Tokata is without a phone and has given her bankcard to another of his workers.”

‘The Ballad Of Songbirds & Snakes’: The Cast & More About ‘The Hunger Games’ Prequel

But Tokata/Gibson denied their parents’ allegations against Ezra. “My father and his allegations hold no weight and are frankly transphobic and based in the notion that I am somehow incapable of coherent thought or opposing opinions to those of my own kindred worrying about my well being,” the child said in a statement on Instagram. “I am now aware of the severity of emotional and psychological manipulation I was made to endure while in my parents home.”

Ezra’s most recent arrest as of the time of publishing was on August 7. The actor was charged with felony burglary after allegedly stealing bottles of alcohol from a home three months earlier in Stamford, Vermont, according to CNN. Ezra is reportedly set to be arraigned in court on September 26.

On Monday, August 15, Ezra provided a statement to Variety, saying that they are seeking “ongoing” treatment. “Having recently gone through a time of intense crisis, I now understand that I am suffering complex mental health issues and have begun ongoing treatment,” Ezra told the publication. “I want to apologize to everyone that I have alarmed and upset with my past behavior. I am committed to doing the necessary work to get back to a healthy, safe and productive stage in my life.”

Ezra Miller as ‘The Flash’

Ezra made his film debut as Barry Allen/The Flash in 2016’s Batman v. Superman: Dawn of Justice. They had just a brief appearance in that movie, as well as Suicide Squad which came out that same year. They had a major role in 2017’s Justice League, alongside Ben Affleck as Batman, Henry Cavill as Superman, Gal Gadot as Wonder Woman, Jason Momoa as Aquaman, and Ray Fisher as Cyborg. Ezra was also featured in 2021’s Zac Snyder’s Justice League, which was original director Zac Snyder‘s cut of the film. Ezra also made a cameo appearance in the season finale of HBO Max’s Peacemaker starring John Cena.

The Flash is Ezra’s first standalone movie in the DCEU. The film was officially announced by Warner Bros and DC Films back in October 2014, though it took years for the planning and pre-production stages. Andy Muschietti signed on as director in November 2019. The official description for the movie reads, “Barry travels back in time to prevent his mother’s murder, which brings unintended consequences.”

Is ‘The Flash’ Release Cancelled?

As of now, The Flash is still set to be released in theaters on June 23, 2023. After Ezra’s first arrest in March 2022, Warner Bros. and DC executives held an “emergency impromptu meeting” to discuss the actor’s future with the studio, Rolling Stone reported. According to a source, the “consensus in the room was to hit pause on any future projects involving Miller including possible appearances in the DC Extended Universe.”

In June 2022, Deadline reported that the studio has “tried getting help” for Ezra. “There is no winning in this for Warner Bros,” a studio source told the outlet. “This is an inherited problem for Zaslav. The hope is that the scandal will remain at a low level before the movie is released, and hope for the best to turn out.”

After Ezra’s felony burglary arrest in August 2022, Warner Bros. reportedly settled on three possible scenarios that could play out in regards to Ezra and The Flash, according to The Hollywood Reporter. A source close to the studio detailed these three scenarios to the outlet. The first is that if Ezra seeks professional help, the actor could give an interview to explain their “erratic behavior over the past few years.” This scenario would also involve Ezra doing limited press to promote The Flash. In the second scenario, where Ezra doesn’t seek help, The Flash would still be released as planned but Ezra wouldn’t be involved in the marketing or publicity. The role of Barry Allen/The Flash would also be recast for future DC projects. The third scenario involves the situation with Ezra getting worse than it already has. If that happens, the studio will scrap The Flash entirely despite it costing $200 million to create. Obviously, that’s Warner Bros. absolute worst case scenario.

Ezra is the main star of The Flash and they supposedly plays multiple characters and is in every scene, per THR. The full cast is filled with A-list stars. Michael Keaton is reprising his role as Batman. Michael played Batman in Tim Burton‘s movies from the late 1980s/early 1990s. He was also supposed to be in Batgirl, which was canceled entirely by Warner Bros. Ben Affleck will also be playing his Batman from the DCEU. Ben and Ezra have worked together on previous DCEU films. Ron Livingston is playing Barry’s father, Henry Allen. Ron is replacing Billy Crudup, who previously played the character in the DCEU. Maribel Verdu will play Barry’s mother, Nora Allen, who was murdered when he was a kid. Kiersey Clemons is starring as Iris West, Barry’s love interest.

The cast also includes Michael Shannon as General Zod, one of Superman’s biggest villains. Ante Traeu is playing Faora-Ul, General Zoë’s right-hand woman. Sasha Calle is playing Supergirl in her DCEU debut. Sasha is the first Latina actress to play Supergirl. Tamuera Morrison is also expected to appear as Aquaman’s father, Thomas Curry. Reverse Flash, who is Barry’s main foe from the comics, is supposedly the main villain of the film. It hasn’t been officially announced who is playing Reverse Flash.