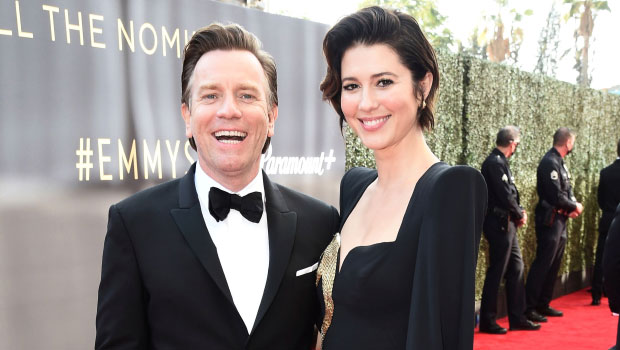 Ewan McGregor, 51, and Mary Elizabeth Winstead, 37, look like they’re in newlywed bliss in their first public post-wedding photos! The married couple couldn’t keep their hands off of each other during an outing at Bike Shed Motor Co restaurant in downtown Los Angeles on Tuesday, just two weeks after their “small” wedding took place. They were both all smiles in the pics as they wore casual outfits and at one point, the new husband even gave his wife a sweet kiss on the cheek as he was standing behind her.

Ewan’s outfit included a black cardigan over a gray top and white pants with brown boots. He also wore a plaid newsboy-style hat and had a black-banded watch around his wrist. Mary wore a long gray t-shirt-style dress with multi-colored sneakers and had a black headband in her hair.

In addition to putting their arms around each other, Mary linked her hand around Ewan’s upper arm as they walked outside and enjoyed the nice weather. They were also hanging out with friends, who they had a chat with when they weren’t spending time alone.

Ewan and Mary’s latest outing comes just a few days after they exchanged vows “in front of close friends and family.”

“It was a small wedding for family and close friends,” a source told PEOPLE. “They had an outdoor ceremony. It was lovely and joyful. The menu was farm-to-table. They are an adorable couple. They are pretty low-key and like their canyon life. They often hike and go to the beach.”

The two lovebirds first met while working on the FX series Fargo in 2016 and although they were both married at the time, it wasn’t long before they split with their spouses and started dating each other. Ewan reportedly separated from his wife, Eve Mavrakis, in May 2017 after 22 years of marriage, which was around the same time Mary Elizabeth announced her split from her husband of seven years, Riley Stearns. Ewan and Mary welcomed a son Laurie in 2021.