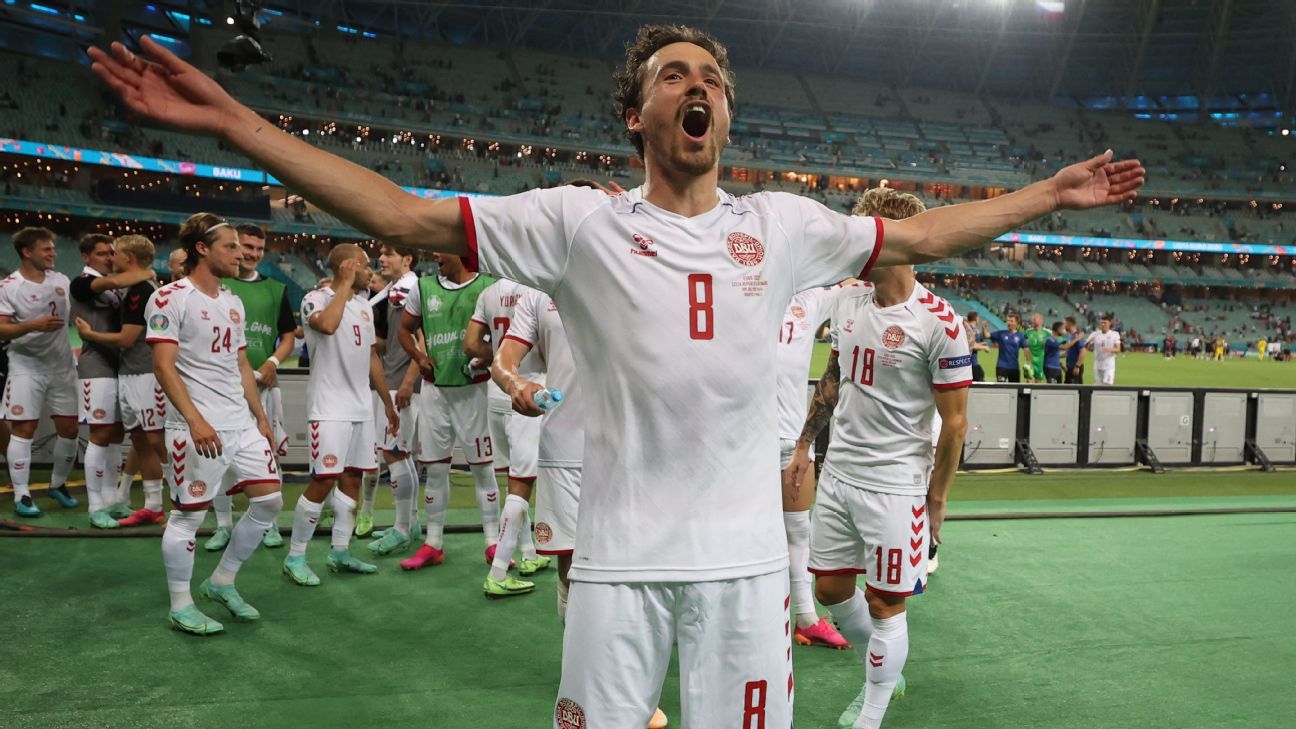 Denmark perform at their best when the world is behind them. At Euro 1992, they were “pulled” off the beach (or at least preparing for their holidays) to step in as a last-minute replacement for Yugoslavia, and they defied the odds to win it all. Nearly 30 years later, at Euro 2020, they have recovered from the traumatic circumstances around the cardiac arrest of talisman Christian Eriksen to reach the last four, and their story is not over yet.

In 1992, Denmark’s late call-up cemented their place as Europe’s favourite underdogs. This year, their semifinal clash against England on Wednesday — stream LIVE, 3 p.m. ET, ESPN/ESPN+ (U.S.) — will be played in front of a partisan crowd at Wembley Stadium, and after Eriksen collapsed on the field during their opening game against Finland nearly three weeks ago, there is seemingly only one choice for the neutrals.

England are clear favourites with the bookmakers, but you don’t need to remind Denmark, a country of fewer than 6 million people, that anything’s possible when it comes to the European Championships. They already know.

“We came in late [in 1992], and maybe there was some sympathy for us,” Johnny Molby, who was part of the Denmark squad 29 years ago, tells ESPN. “It’s the same at the moment that everyone feels a little bit sorry for Denmark.”

In 1992, Yugoslavia had already arrived in Euro host country Sweden when, amid civil war at home and United Nations sanctions, they were kicked out. Denmark had failed to make it to the eight-team tournament after finishing second behind Yugoslavia in their qualifying group, but they were hastily invited to make up the numbers, and their plans to watch the games on TV were quickly cancelled.

“A few days before, there was some talking that it could be possible,” Kim Vilfort, a striker for the 1992 Denmark team, tells ESPN. “There wasn’t much discussion about whether it was right or wrong to go. The discussions were very fast and then, ‘OK, we go.'”

The Danish FA were only officially notified on May 30, 1992 — the day before the final squads had to be submitted to UEFA. Manager Richard Moller Nielsen was given an extra few days to name his players, and on June 11, they lined up against England, World Cup semifinalists two years earlier, in Malmo.

“We were laughing,” Molby remembers about the moment he and his teammates were told they’d have a week to prepare. “We were in good physical shape, but there was no expectation on us, and everyone was relaxed.”

A goalless draw with England was followed by a 1-0 defeat to Sweden, but a 2-1 win over France — secured with a late goal from Lars Elstrup — in their final group game was enough to qualify for the 1992 semifinals.

At Euro 2020, the pivotal victory came against Russia after defeats to Finland — understandable after witnessing Eriksen’s cardiac arrest during the game — and Belgium. Denmark have since followed it up by beating Wales 4-0 in the last 16 and Czech Republic 2-1 in their quarterfinal to set up their date with England.

Take a look at the moments that led to Denmark and England facing off in the 2020 Euro semifinals.

“Getting a good result against France was the moment we started to believe something special could happen,” Molby says of the campaign in 1992.

“France had [Eric] Cantona and [Jean-Pierre] Papin; they were a very good team. I think it’s the mentality of the Danish people: When you’re underdogs and you start to get good results, Denmark is a dangerous team to play against. Everybody’s confidence grows, and it is very difficult to play against [us]. It happened in 1992, and it is the same now.”

Although Denmark have reached the semifinals this year without Eriksen, the 1992 team were also without a key player. They made history without one of their best players after forward Michael Laudrup missed the tournament because of differences with Nielsen, who had a reputation for favouring defensive organisation over attacking flair. Laudrup’s brother, Brian, had only just returned from a serious knee injury but went on to be named in the team of the tournament alongside Manchester United goalkeeper Peter Schmeichel.

Netherlands, winners four years earlier, in 1988, were beaten on penalties in the semifinal after a 2-2 draw — Schmeichel saved the decisive spot kick from Marco van Basten — before the final against reigning World champions Germany in Gothenburg.

John Jensen, who went on to sign for Arsenal, scored for Denmark after 18 minutes. With Germany furiously pushing for an equaliser and forcing Schmeichel to make two outstanding saves, Vilfort made it 2-0.

The match was played just days after Denmark had voted to stay out of the European Union.

“It was a special moment and a special time in Denmark,” Vilfort tells ESPN. “It was something that united the whole country, and that’s difficult. Not many things can do that, but football can. In Denmark, people say they can always remember where they were on June 26, 1992. All people say that, even people who don’t know anything about football!”

If July 11, 2021, is going to be remembered in the same way, Kasper Hjulmand’s group will have to beat England and then defeat either Spain or Italy in the final.

“It’s possible,” Vilfort says. “A semifinal against England at Wembley is difficult, but it’s only one match. The Danish team have so much confidence. It’s more difficult than in 1992, because there are four knockout matches — and we had two — but anything is possible. Denmark is not the favourites, but people like to see the underdog win sometimes.”

Even if Denmark come up short in their bid to emulate the class of ’92, in many ways they’ve already won. Eriksen is out of hospital and recovering well, according to the team. Compared to their star midfielder’s health, lifting the trophy on Sunday comes a distant second. Anything that happens from here is a bonus, and Hjulmand believes the experience has brought the group even closer together.

“When Christian collapsed, that changed everything,” Hjulmand said after the 4-0 win over Wales. “We were put in a different situation: I am grateful for the support everyone has shown, as that’s what we needed in that moment. I admire the boys. They’re warriors.”

Molby drew some additional comparisons between the 1992 and 2021 Danish squads.

“In 1992, it was a big surprise for everybody,” Molby says. “It shows what team spirit and confidence is able to do. We had that, and Denmark have it again now. We were well organised and knew what to do. We played against teams with maybe better players, but we had the best team.”

“The Danish people are proud of the team, and they are getting a lot of support,” he explains. “England at Wembley is a tough game, but anything can happen. We showed that in 1992. For a small country, when you give a signal to Europe that we can do something like that, it’s fantastic.”

Simone Biles and the extraordinary

USWNT’s flaws have been exposed at the Olympics. What’s gone wrong, and can they fix it vs. New Zealand?

How to use Nelson Cruz, Barry Bonds and Hank Aaron in the same sentence

Texas, Oklahoma reached out to SEC about joining

Crossover Alert! Reality Stars Who Hooked Up With Stars From Other...