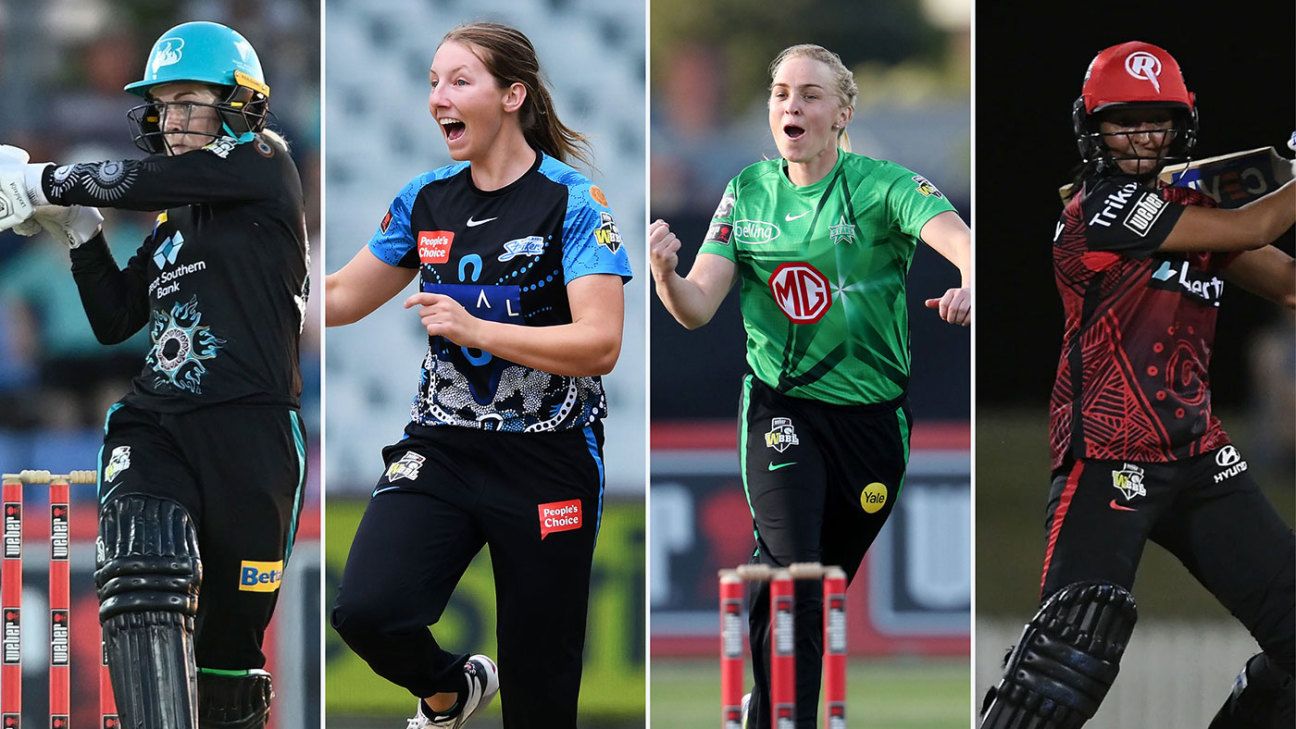 Runs 528; Average 52.80; Strike-rate 132.00
The No. 1 T20I batter in the world was the leading run-scorer in the regular season with another prolific display at the top of the order. The standout was the 62-ball century against Melbourne Renegades. As a reminder that there are different ways to be successful in the format, she struck only one six.
Runs 407; Average 33.91; Strike-rate 130.86 | Wickets 9; Average 19.22; Economy 7.20
Devine just keeps churning out the numbers. The value of the pairing with Mooney – the most destructive T20 opening combination in domestic cricket – cannot be understated. Her medium pace adds further value as does the extraordinary record in Super Overs. She won two off her own bat this season.
Runs 436; Average 36.33; Strike-rate 120.44
It is becoming increasingly difficult to ignore Redmayne’s claims for a place in the Australia side even with the argument that it’s a tough batting order to break into. She showed terrific consistency with five half-centuries, giving further evidence of her expanded stroke-range. The leg-side stumping in Heat’s final group game was another highlight and she would challenge Mooney for the gloves in this side.
Runs 403; Average 33.58; Strike-rate 128.34 | Wickets 6; Average 42.00; Economy 7.63
With a permanent place at the top of the order (although slipping down a little in this XI) Harris added consistency to her game this campaign, with four half-centuries in 13 innings, without forgoing her natural flair. A little lean on wickets and a touch expensive, but this side has no shortage of bowlers. Katie Mack very unlucky to miss out, but with a number of other accumulators in the order, Harris’ power shades it.
Runs 399; Average 66.50; Strike-rate 135.25 | Wickets 15; Average 20.40; Economy 7.46
Revived her reputation as a masterful finisher – notably against Adelaide Strikers with 73 off 46 balls – in one of the key elements of Renegades’ impressive campaign. Some of her off-side driving was stunning and she topped the regular-season sixes tally with 18. A very handy option with the ball and impressive leadership qualities.
Runs 164; Average 27.33; Strike-rate 106.49 | Wickets 15; Average 18.73; Economy 6.24
The former Ireland allrounder, who is now based in Australia but was classed as an overseas player, was very consistent with the new ball and a regular threat. Became the first bowler to send down three maidens in a WBBL innings with her extraordinary spell of 3-3-0-3 against Sydney Thunder. Was useful with the bat as well and one of only two of Stars’ regular batters to strike over 100.
Runs 100; Average 14.28; Strike-rate 97.08 | Wickets 21; Average 14.04; Economy 6.53
After missing the India series through injury, Jonassen was back doing what she does best – dominating with the ball as the leading wicket-taker. Didn’t quite fire with the bat but still bolsters the lower order.
Wickets 16; Average 16.75; Economy 5.82
There is an opening for a legspinner in the Australia side after Georgia Wareham’s injury and King must be in contention after picking up her Stars form with her new club. Produced a number of high-reel deliveries during the campaign while going at under a run-a-ball and was a banker for her captain.
Wickets 10; Average 14.50; Economy 5.37
Could be viewed as something of a surprise inclusion, but having belatedly found a spot in the XI her left-arm swing, often finding sharp late movement, she made a significant impression although she rarely had runs to work with. If the form line continues, a spot in the Australia A team is certainly within reach again.
Wickets 15; Average 18.46; Economy 6.44
Her pace continues to provide a point-of-difference to whichever attack she is part of and would regularly take top-order wickets to set opposition back. Removed her Australia team-mate Ash Gardner first ball twice. Will occasionally prove expensive in the hunt for wickets but definitely a price worth paying.
Wickets 13, Average 22.38; Economy 6.06
Often bowled better than a haul of 13 wickets would suggested and regularly pushed the speedgun into the mid-120kph area. Significantly, too, managed to play all the matches which was a promising sign for her durability after a lot of injury problems. This XI is packed with bowling options, but if the balance had been for another specialist spinner it would have gone to Lilly Mills from Scorchers.