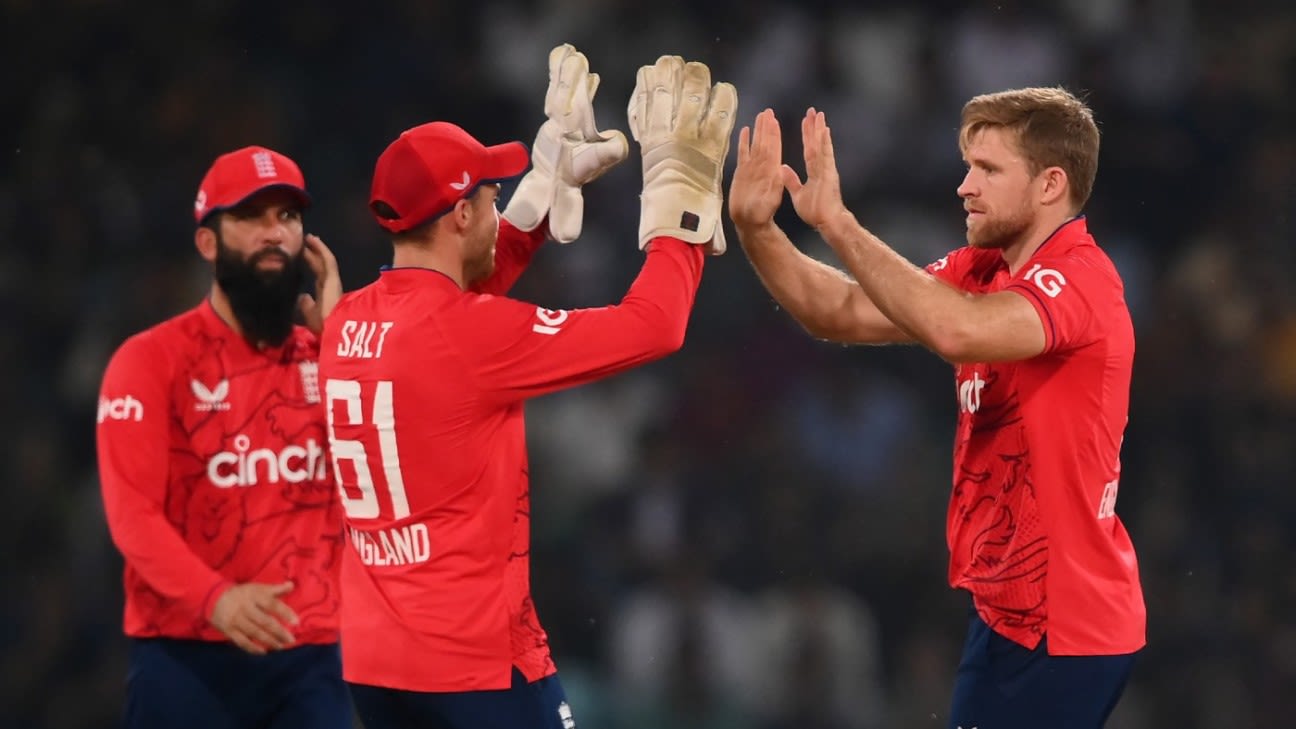 England should consider picking David Willey for Sunday’s T20 World Cup final against Pakistan, as he may be a better fit for the MCG than Chris Jordan. That is the view of Eoin Morgan, their ex-captain, who has been following the team around Australia in his new role as a pundit for Sky Sports.
Jordan, a key player in T20Is throughout Morgan’s tenure, replaced the injured Mark Wood in the England team for Thursday’s semi-final win against India at Adelaide Oval. He returned figures of 3 for 43 across his four overs and was singled out for praise by Buttler, who said Jordan had delivered “a hell of a performance” after being asked to bowl three of the last five overs.

But Morgan suggested that the dimensions at the MCG – where the straight boundaries are slightly shorter than at Adelaide Oval but the square boundaries are considerably longer – might not suit his yorker-heavy method at the death, and suggested England could bring Willey into the side in a bid to take early wickets.

Asked on Sky’s Cricket Podcast how big a loss Wood would be if he fails to recover in time for Sunday’s final, Morgan said: “When you look at conditions here, it just suits him and it probably works against someone like Chris Jordan at the death bowling his yorkers. Straight at the MCG, it’s so short. There’s very little margin for error.

“If Mark Wood isn’t fit, you might even see someone like Dave Willey come in to swing it, and then you can bowl him and Chris Woakes at the death, bowling into the wicket, forcing the Pakistan batters to hit square and creating catching opportunities. There might be another selection question for Jos Buttler.

“It goes without saying, you have to have those ground dimensions working in your favour in big games because if you make basic mistakes and get hit to the short side the whole time, you’re going to be up against it.”

Morgan was also asked about the possibility that the final could be decided by a Super Over, like the 50-over World Cup final in 2019, and who he would choose to bowl one for England. “If you were to say flat wicket, everything set fair at the MCG, I think it’d be Sam Curran,” he said. “He’d bowl into the wicket, he’d bowl wide hole [yorkers] so you can’t get it straight, so you’d set an off-side field with behind square up and make them hit to the long side.”

As for who England should send out to bat in a Super Over, Morgan said: “I would work back: who’s going to be bowling for Pakistan? If it was obvious, I’d send out whoever is the most likely to counter it. I’d prefer left/right-hand to be honest. If it was spin, absolutely Mo [Moeen Ali]. And given the two spinners that they play – it’d either be Shadab [Khan] or [Mohammad] Nawaz – it might even be a Curran-Mo, not even Buttler scenario; Buttler at No. 3.”