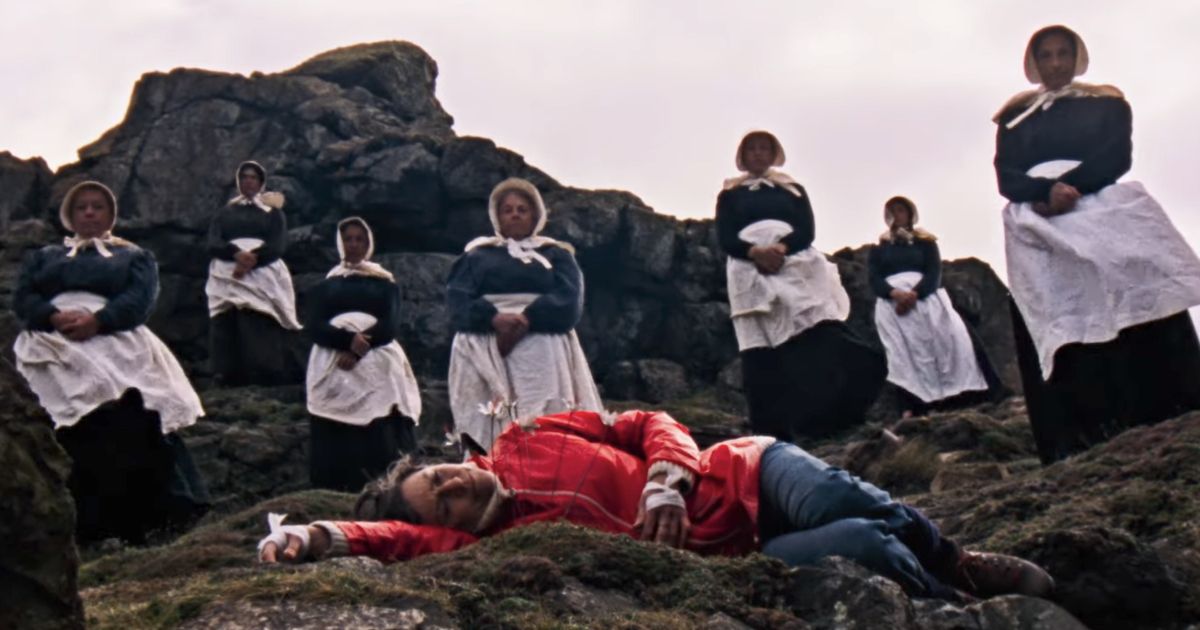 The ’70s were a landmark decade in horror history: Halloween, Alien, The Texas Chainsaw Massacre, Suspiria, and many more legendary horror films reformulated the genre to all-new shocking and terrifying highs. You can usually tell when a movie is from that decade, either from the grainy film used, to the warm, saturated colors that fill each reel. For some, it’s a comforting reminder of a different time when experimentation ruled above all else. Seeing as how the ’80s and ’90s have been thoroughly probed for nostalgia by this point, the ’70s remain unexplored in comparison — until now.

From Mark Jenkin, director of the British drama Bait, comes Enys Men: a film that was seemingly ripped straight out from the decade with an emphasis on experimental filmmaking techniques and psychological horror. It comes courtesy of Neon, whose prior film distributions included the legendary Parasite and the recent Nicolas Cage vehicle Pig, as well as Film4, the film division of the United Kingdom’s Channel4 network.

Here’s a breakdown for the Enys Men trailer.

Right away, shortly after the production credits, we have a dimly lit view of an island, shadowed by the encroaching sunset. The island itself is somewhere in the Celtic Sea, isolated from human civilization. A pair of birds fly by before we get a brief glimpse of a single cabin. Surrounded by the noises of nature, we can assume that the house is one of few — if any — on the premises.

Related: Smile: Why You Shouldn’t Miss This Psychological Horror Film

Night falls. A woman in a red jacket (Mary Woodvine) — identified as “The Volunteer” — is seen wandering past a pair of stone structures as a scratchy radio transmission blares into the dead air: “Are you lonely?” She calmly denies this before she’s answered by the laughter of children, with nary a soul in sight. The Volunteer starts a generator and wanders into an underground passage resembling a crypt or a mining tunnel. She approaches the camera, her flashlight bursting like an exploding star as she illuminates the darkness.

She lights up the rocky floor in front of her. Something seems off. Compared to the gray colors of the walls, it’s stained a sickly warm orange. The Volunteer swings her light towards the ceiling before we’re given a nightmarish montage of unsettling imagery, conjuring memories of the vibrating figures from Jacob’s Ladder. We linger on The Volunteer’s face, lit by an unsteady light in a void of darkness, as she stares off into nothing. The radio chimes in one last time: “Can you hear me?”

You’ll immediately notice the film’s style throughout the rest of the trailer. Enys Men was shot on 16mm colour film stock, and combined with Jenkin’s “post-synched sound,” it perfectly replicates the look and feel of a movie from the ’70s while retaining modern horror sensibilities. We can see more of this with every dramatic camera zoom, the grainy textures of the trailer’s many closeups, and the unnerving, almost subliminal moments scattered throughout the trailer. It creates an unnerving, dreamlike atmosphere, with The Volunteer seemingly drifting in and out of reality as we witness water droplets rising towards a cavernous ceiling, ghastly depictions of self-harm, and screaming faces.

Related: Why HBO’s Los Espookys Is an Underrated Horror-Comedy Series

We’re given little of the film’s actual story, with the rest of the trailer giving an idea of what the film will feel like. From the trailer’s description, we can see that The Volunteer will be accompanied by The Boatman (Edward Rowe), a bearded, balding man who gets a full-focus scream in the trailer. Judging from his name, he’s likely the person who ferries people to and from the island.

We also have The Girl (Flo Crowe), possibly a member of the giggling children that make multiple appearances in the trailer, both visually and audibly. Lastly, there’s The Preacher (John Woodvine), who may or may not be the haunting, dark face that accompanies the sting at the end of the trailer. Otherwise, he doesn’t seem to make an appearance.

Enys Men Is Set in Cornwall

The trailer concludes with a haunting sight. A bandaged, dazed Volunteer lies on top of a rocky shoreline, with seven women singing and dancing above her battered body. The women are dressed in what looks like traditional Cornish garb, with pristine bonnets and dark-colored blouses. According to Dread Central, the film is directly inspired by Cornwall — a southwestern English county that was also used to shoot the film on location. Seeing as how the film takes place in the same region, it only makes sense for them to dress this way.

Enys Men will be released in theaters in the United Kingdom on January 13th, 2023. The film will release internationally on June 16th, 2023.