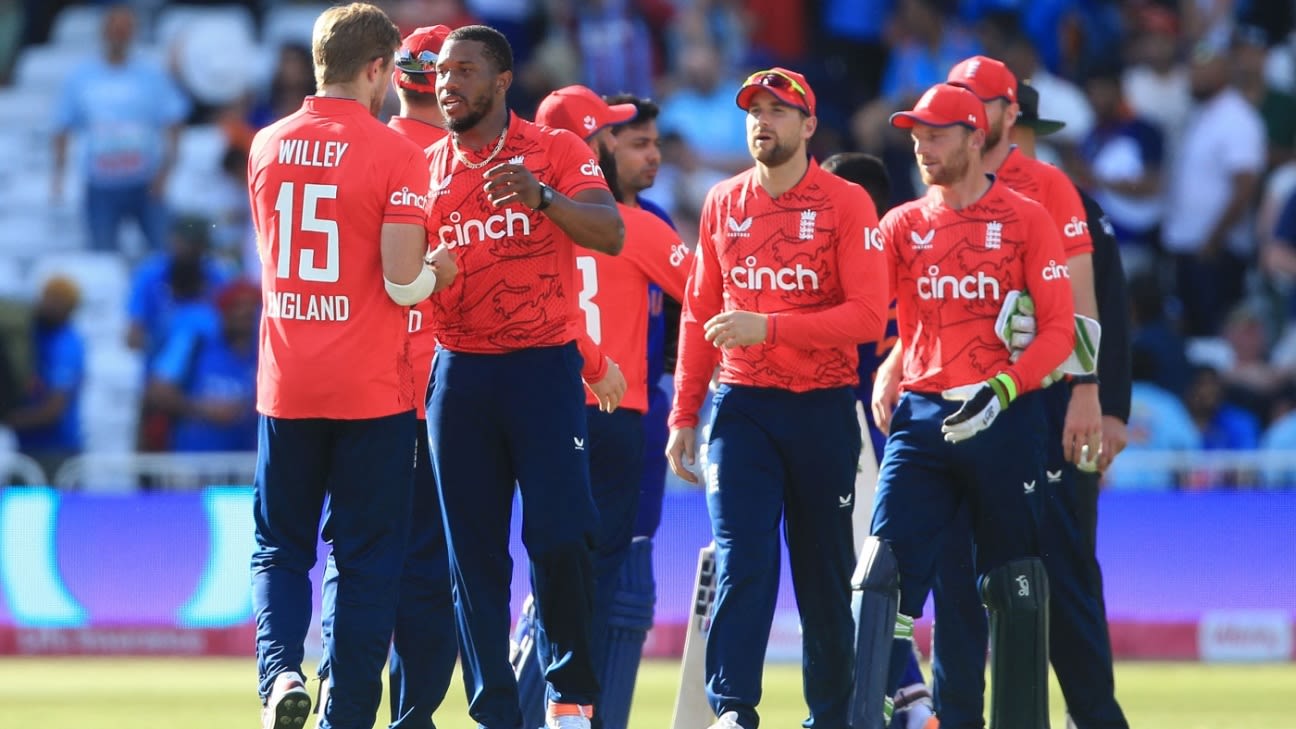 Right, we are on to the stuff that matters. After an ODI series that not even the weather wanted to be completed, we are entering the T20I season with all eyes on the World Cup. England have a whopping 13 fixtures before the tournament; South Africa have only eight matches, the bulk of which are in the next ten days, and without regular captain Temba Bavuma.

You may think that puts England in a more stable place to prepare from, but they are at the tail-end of 12 white-ball matches in 24 days and will have to be careful to avoid flagging at the end, especially as they have only just entered a new white-ball era. These T20Is are Matthew Mott and Jos Buttler‘s final opportunity to win a white-ball series at home after they lost both rubbers against India, and shared the spoils in the ODIs against South Africa.
South Africa were on a similar hot streak and had won three T20I series in succession before the World Cup in 2021, but have since been rocked by the unavailability of key personnel. Anrich Nortje spent six months recovering from a hip and back issue after that but has made a strong return, and now Bavuma is out until at least September with an elbow injury.
David Miller will lead in his absence after a stunning run at the IPL, where he won the trophy with Gujarat Titans. But with a glut of top-order batters, one can’t help but feel there could be a bottleneck once Bavuma returns.
At the same time, South Africa have chosen not to continue with Keshav Maharaj in charge, though he has done the job even in T20Is when Bavuma was previously injured, which suggests they want to keep their options of playing only one specialist spinner in Tabraiz Shamsi open.

Meanwhile, Miller is their most experienced batter, as is his counterpart Buttler, as both will want to show their value by leading from the front.

Dawid Malan has had a slightly tougher time than usual in this format recently, and broke a year-long drought without a half-century in T20Is with 77 in the final T20I against India. He was the leading run-scorer when England toured South Africa late in 2020, and was England’s best batter recently against India too.

Malan’s first fifty in 11 innings since mid-2021 meant he had slipped from No.1 to No.4 on the T20I batting rankings, and will be keen to regain some ground as he faces South Africa, against whom he averages 59.

Whether he plays immediately or not, there will be plenty of interest in Rilee Rossouw, who makes his return to the South African squad after a Kolpak hiatus which he used to make his name in T20 leagues. Rossouw has enjoyed success at PSL and BPL, and finished as the second-highest run-scorer in this year’s T20 Blast. And before his success there, he was back in South Africa, where he was the leading run-scorer in the provincial T20 cup.

But it remains to be seen whether all has been forgiven and forgotten after the way he left. Of all those who chose to cut their international careers short, Rossouw’s was the most puzzling, not least because South Africa’s selectors had stuck with him after he was dismissed for four ducks in his first six ODI innings and there was talk of him being promoted to the Test side.

Jonny Bairstow is expected to continue at No. 4, as he has been doing in this format over last 18 months•ECB/Getty Images

Jonny Bairstow had some ice on his knee for what seemed to be a swelling, although he played a full part in practice before the game. Fit to play which he should, he is expected to continue at No. 4, as he has been doing in this format over the last 18 months, albeit with mixed results. England are likely to stick with the extra batter as they did for the third T20I against India, and may rotate their seamers to minimise risk of injury.

Rossouw could edge out Reeza Hendricks at the top of the order. Also, Aiden Markram‘s return after he missed the India series with Covid-19 may mean there is room only for either an allrounder or a second spinner.

South Africa will have to chose between Dwaine Pretorius, who also operates as a pinch hitter; Andile Phehlukwayo, who is coming back from a mild concussion and will be assessed ahead of the game; and Wayne Parnell in the allrounders’ role. In the pace attack, Kagiso Rabada is back after being rested from the ODIs.

In this year’s T20 Blast, the average first innings score in Bristol was 171, while in Cardiff – the venue for the second T20I just a day after – it sits at 147. That could mean bowlers who have worked on their variations will have a big role to play in taking pace off the ball and getting movement off the seam.

Also, the good news is that the rain that affected the ODIs is not likely to interrupt the T20Is. Wednesday is due to be cloudy and cool, with temperatures of around 22 degrees.

England and South Africa are neck-and-neck in T20Is against each other. They have played 22, with England winning 11 and South Africa ten, with one no result. However, England have won the last three series between the two sides, including a 3-0 sweep in November 2020.

“Why would we change it? We have been doing well with it over the past few years, so I think we will continue doing what we have been doing.”
England will keep going in guns blazing, according to Adil Rashid, who does not see any need to alter their approach

“Things do get a little bit crazy and frantic out there, but it’s just about having your clear plans and staying as calm as possible.”
David Miller is preparing for his second stint as stand-in captain