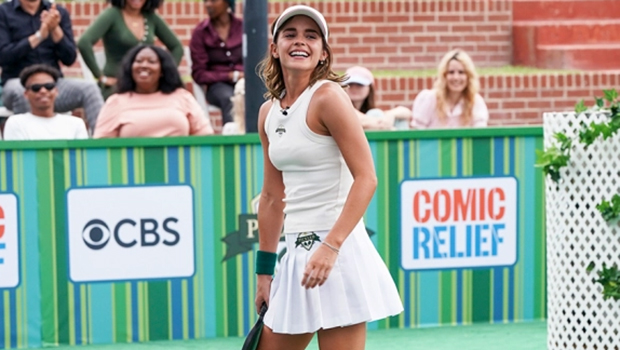 It’s time to get pickled! Emma Watson is one of the celebrities competing in the epic pickleball tournament hosted by Stephen Colbert. Pickled will feature 8 celebrity teams as they hit the pickleball court in hopes of winning The Colbert Cup and raising money for the non-profit Comic Relief US.

Emma is paired with boxing legend Sugar Ray Leonard. Their official name is The Volley Ranchers. Emma looks gorgeous in her pickleball outfit ensemble, including a white tank top and skirt with the Pickled logo. She also rocks a visor to keep the sun out of her eyes as she tries to win her game with Sugar Ray.

The Harry Potter alum will be facing off against other celebrities competing in the tournament. The stars include Murray Bartlett, Kelly Rowland, Daniel Dae Kim, Luis Guzman, Dierks Bentley, and more.

At the helm of the special is The Late Show host Stephen Colbert. Additionally, there will be announcers — Cari Champion, John Michael Higgins, and Bill Raftery, throughout the tournament adding commentary to the epic celebrity matches. The national anthem will be performed as a duet by Kenny Loggins and Stephen.

At the end of the day, only one team will reign as the Pickled champions. The two-hour sports comedy special will air on November 17 at 9 p.m. on CBS. Pickled will also be available to stream live and on demand on Paramount+.