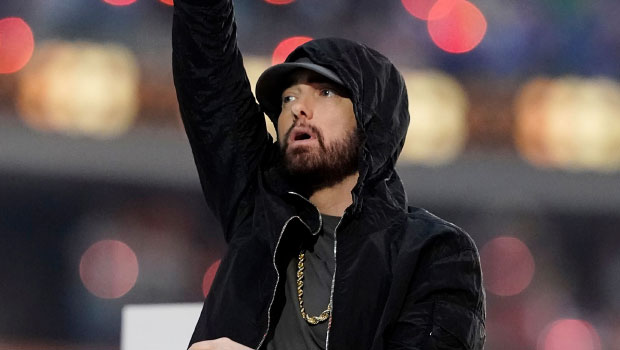 Hailie Scott Mathers returned to the ‘gram with another on-trend look! The 26-year-old daughter of rapper Eminem showed her over two million followers how she styled her ripped straight leg blue jeans in a double photo post on Wednesday, April 27. She rocked the high-waisted denim pants with a cropped lime green blazer, throwing in some serious 2000s vibes.

The cute jacket was double breasted and collared with slits on the sleeves for a flare effect. A green jade ring was boldly positioned on her left hand index finger, also capturing her fresh peach colored manicure. The social media influencer finished the outfit with a wide strapped white leather handbag over her left shoulder as she posed in a doorway at home. “[Photos] from the weekend,” her short and simple caption read.

Her following couldn’t get enough of the casual chic look. “Where is this outfit from?…I’m obsessed with this color,” one wrote with a heart-eye emoji. “Beautiful style,” and “you always have such great looks,” others wrote. “Looking fresh 2 death as always,” a fourth commenter penned on the 90s-meets-00s ensemble.

Hailie, who is Eminem’s oldest child with ex Kim Scott, 47, generally keeps out of the public eye sans Instagram — however, she was on hand at her dad’s epic Super Bowl Halftime performance in February! The 26-year-old once again wore ripped jeans, this time with an edgy leather moto jacket and sneakers, to support the GRAMMY winner for his first-ever halftime show with Dr. Dre and Snoop Dogg.

“here for the halftime show, staying for stafford,” she captioned a snap taken inside the massive SoFi Stadium, clearly over-the-moon to watch her pops — née Marshall Mathers — take the stage! He didn’t disappoint, bringing the house down with his legendary, Oscar wining song “Lose Yourself,” which was the lead soundtrack single from 2002’s autobiographical film 8 Mile.

Tyler, The Creator Wins Best Rap Album: See Other Past Winners From The Last 20 Years