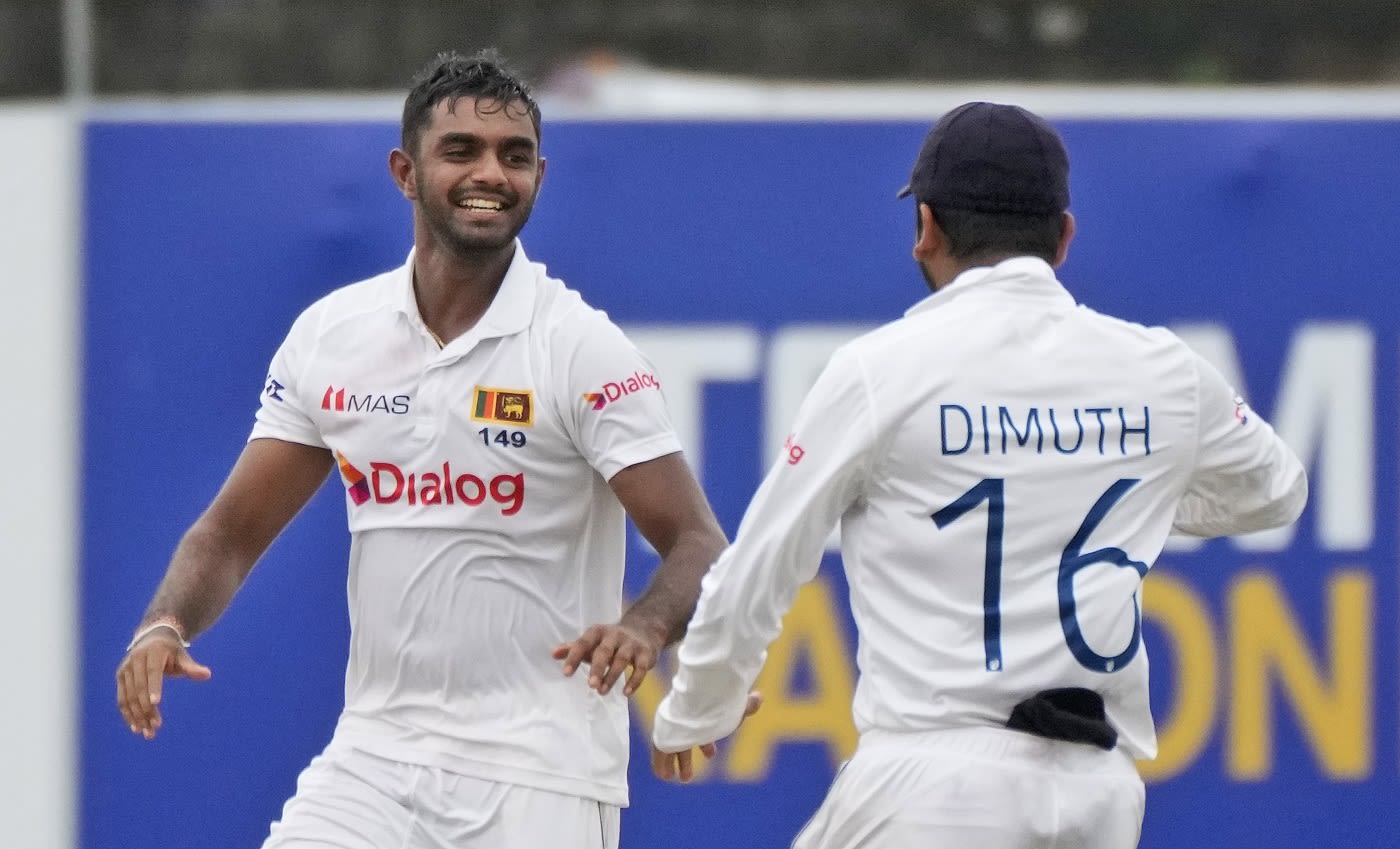 Sri Lanka’s spinners were made to toil on day five, bowling 48.3 overs for the last four wickets

Nkrumah Bonner defied Sri Lanka for 173 balls on day five, Joshua Da Silva joined him for a 100-run, 44.4-over stand, but although the sky was swimming with dark clouds, rain did not arrive until minutes after Sri Lanka claimed the last wicket to clinch victory in Galle.

Having scythed through West Indies’ top order on the fourth evening, Sri Lanka’s spinners were made to toil on day five, bowling 48.3 overs for the last four wickets. Offspinner Ramesh Mendis had begun the day with four wickets to his name, but it was left-arm spinner Lasith Embuldeniya who finished with a five-wicket haul – the third of his 11-Test career – claiming all but one of the wickets to fall on day five. Praveen Jayawickrama took the other one. Between them, Sri Lanka’s three frontline spinners took 18 wickets in the 187-run victory.

Bonner and da Silva battled hard during their morning resistance, trying few run-scoring strokes, and generally displaying a level of concentration and application unseen from West Indies’ batters so far in the match. They had contrasting styles – Da Silva more comfortable on the front foot, and the more likely of the two to sweep, and rotate strike.

They each had good fortune. On a treacherous track, there were edges that fell short of slip, aerial mis-hits that landed in space, deliveries that barely missed the stumps and the outside edge, and missed chances as well. da Silva could have been run out on 19 when the pair attempted a quick single, but the cover fielder’s throw missed the stumps. He could have been caught on 23 when he inside edged a big-spinning Mendis delivery, but Pathum Nissanka could not hold on to a tough chance at leg slip, diving to his right. Later, Nissanka would grass another tough chance at short leg, this time off Bonner. But so long as the rain held off, it seemed as if Sri Lanka would continue to create chances, so rapid was the turn off the surface.

With Da Silva’s dismissal in the half-hour before lunch, West Indies’ chances of securing a draw dipped substantially. He had completed a fifty off 121 balls, but was squared up by a turning Embuldeniya delivery a few overs later, with the resultant edge held by Dhananjaya de Silva at slip.

Rahkeem Cornwall then joined Bonner, and put in a shift that lasted 46 balls until he ran out of patience, toe-edging a catch to mid off when he attempted to heave Jayawickrama down the ground. Warrican, the No. 10, saw out 20 balls before he gave a bat-pad catch to silly mid off. Shannon Gabriel, whom Bonner was trying desperately to shield from the strike, was also squared up and caught at slip off Embuldeniya, after a six-ball stay. Bonner remained unbeaten on 68 off 220 balls.

The victory was perhaps just reward for Sri Lanka, whose top order led by Dimuth Karunaratne had dominated in both innings, and whose spinners used helpful conditions well. They earn 12 World Test Championship points in their first match this cycle. West Indies also have 12 points, but have played three matches.