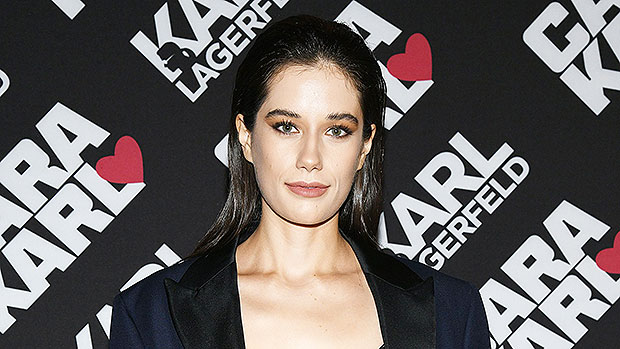 Ella Travolta, 22 looked gorgeous in her New York Fashion Week debut! The daughter of John Travolta, 68, walked the runway at the Karl Lagerfeld show this week and wore a lacy black top under a navy blue oversized blazer and black pants. She had her hair down and slicked back in the front and showed off natural-looking makeup as she put her hands in her pockets.

The beauty‘s proud father took to Instagram to share a photo from the show on Thursday and expressed how proud he was, in the caption. “So proud of Ella’s debut at fashion week in New York City! @ella.travolta,” he wrote. His post was met with a lot of responses from friends and fans who complimented the young model’s photo.

Ella’s latest fashion appearance isn’t the only thing she’s been busy with this year. The talented gal is also a musician and released her debut single “Dizzy” in Jan. She announced the song with a video of her and John lip-syncing to it and an exciting message. “It’s been a long time coming but I’m still that 14-year-old weird girl at heart and I love it. Hope you like it, link in my bio and story.” she wrote in the caption.

Acting is also on Ella’s resume, just like her dad. She was cast as Alicia/Alice in the 2021 flick Get Lost, which is a modern day take on the classic Alice in Wonderland. John shared a photo of her in costume in July 2021 and added a loving caption. “Here’s my daughter Ella starring in a live-action re-imagining of Alice in Wonderland! Called, ‘Get Lost.’ I’m a very proud dad!” he wrote.

Ella’s latest creative realized goals aren’t too surprising since she comes from a very talented family. In addition to her dad John, her late mom Kelly Preston was also known as a gifted actress. She sadly died of breast cancer in 2020, but Ella has continued to honor her memory by making her own positive mark in the world.