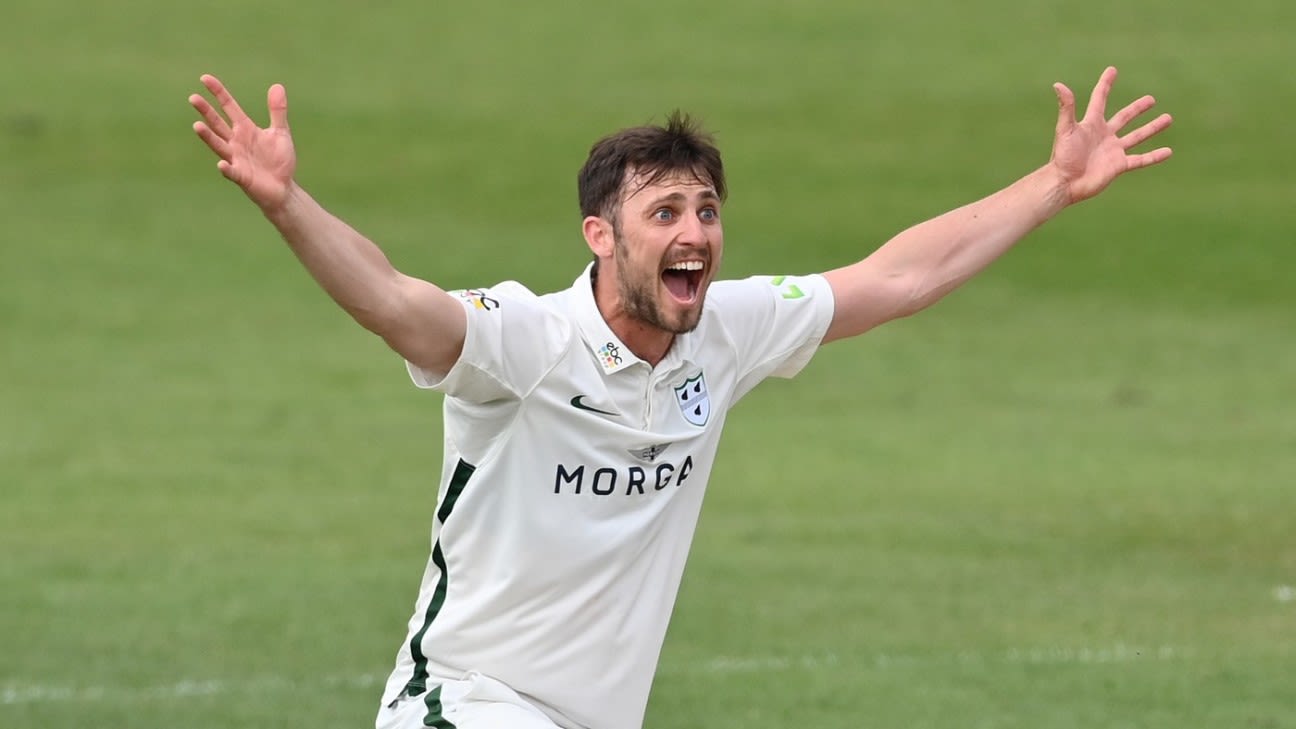 A long journey begins with the first step but the final yards are often the most troublesome. Nottinghamshire have been prohibitive favourites to win Division Two for so long that it seems impertinent to question their credentials now. Yet after the sort of extraordinary day in which this most serene of grounds seems to specialise, it is fair to wonder whether Middlesex might yet nose ahead of Steven Mullaney’s side in the final furlong. For while Tim Murtagh’s side were having the best of their game against Leicestershire, Nottinghamshire’s batters were twice collapsing to Brett D’Oliveira’s attack like a bunch of over-emotional divas on Oscars Night.

Today’s drama was as rich as the New Road carrot cake, so perhaps it was appropriate that most of it took place in the afternoon session, when the famous Ladies Pavilion opens for business amid tumult and hunger. Replying to Worcestershire’s 390, Nottinghamshire were cycloned for 128, losing their last six wickets for 39, four of them in 13 balls from Ed Barnard. The start of the disintegration, though, had begun two overs before lunch when Ben Slater tried to whip a good-length ball from Dillon Pennington to leg and lost his middle stump. It was a careless shot but no more so than one or two of those that followed in the afternoon session. And no more so than were played after tea when Nottinghamshire declined to 66 for 5 before seeming to recover a shade, only to lose Haseeb Hameed, their last serious bulwark against defeat, five overs from the close.

All of which is not to disparage the excellence of D’Oliveira’s bowlers or the manner in which they were supported in the field. Never was this better illustrated than half an hour after lunch when Joe Clarke tickled Pennington down the leg side and Gareth Roderick dived across to grab a superbly athletic catch in his left glove. Such dismissals inspire a fielding while infecting batters with the conviction that this is not their day.

Thus, five overs after Clarke was dismissed, Lyndon James played no shot to a ball from Martin Waite and lost his off stump.

And thus, Tom Moores tried to let his third ball from Barnard pass by unmolested but instead diverted it onto his off stump.

The collapse acquired its own momentum and the New Road crowd, many of whom are veterans of Shantry’s Match and other days under a kind sun, applauded wildly and gazed at each other in ecstatic disbelief.

Suddenly one wished that Sir Andrew Strauss, he of the High Performance Review, had been at New Road to see the excellence of Worcestershire’s seamers on a pitch offering them a modicum of help. He could also have admired the technical accuracy of Roderick, the home centurion, and Hameed in negating those skills and making runs when it mattered and when such accomplishments were difficult. One wished Strauss could have seen the excellence of the format he disparages and wishes to diminish. One hoped he might have seen the enjoyment this game gave to so many and the sheer happiness that stretches across the country as six months of valiant sport reaches a climax. Perhaps he would have thought again. Then again, perhaps he will need to be told some hard truths by the counties’ officials and by the members, some of whom have given much of their lives to this stuff. If so, then so be it. Absolutely so be it. Actually, bring it on.

Back to this wonderful day’s cricket, for still Barnard was not done. If this was his farewell present to Worcestershire before he moves up the M5 to Edgbaston, it was the loveliest of gifts. Hameed had battled away in characteristic fashion for over two hours and had reached a thousand first-class runs for the season when he, too, drove a shade wildly at Barnard and edged to Roderick. Hutton was yorked next ball to leave his side on 99 for 8 and by now almost everyone in the ground, including the batters, expected wickets to fall.

Barnard’s figures read 4 for 3 at one stage and it took three big sixes from Liam Patterson-White to spoil them a little. Nothing though could mar the crowd’s enjoyment. Pennington returned to take the last two wickets and the decision to enforce the follow-on was announced to the crowd almost before the last player had left the field for a late tea.

The cricket following a follow-on is sometimes anti-climactic as a batting side dons a hair-shirt and battles towards respectability. This second evening was different. Ben Gibbon saw to that. Gibbon, in case he has not crossed your radar, is 22 years old and played second-team cricket for Lancashire before Worcestershire, in their endearing way, took a punt on him. Maybe he deserved it, for Gibbon so wanted to be a county cricketer that he worked three years on a building site to make ends meet while he tried to make it happen. One wonders if he would have got the chance in a cowardly new world where there are fewer games and fewer first-class counties. But then you could say the same about Chris Rushworth or Jack Leach or Ben Compton or….

No matter, for the moment. This was the sort of evening that justifies any amount of hod-carrying. In his fifth over, Gibbon bowled Slater, who was late on the shot; in his seventh he induced Matthew Montgomery to play on; in his eighth he had Clarke caught behind down the leg side for the second time in the day after he fell into the trap set by bowling on his hip.

Worcestershire’s other seamers joined the fun. James played no shot to Waite, who then castled Mullaney with a good ball that straightened and took the off stump. Josh Tongue completed the best day of Worcestershire’s season when he produced an outstanding delivery that bounced a little higher, seamed away and took the edge of Hameed’s bat when the opener had made 58. That gave Roderick his fifth catch of a day that had begun with him reaching his second successive Championship century. But then Roderick is the sort of bloke who battles through the bad days and thereby deserves the good ones. He is the sort of cricketer who lets no-one down. But then the cricketers rarely do.