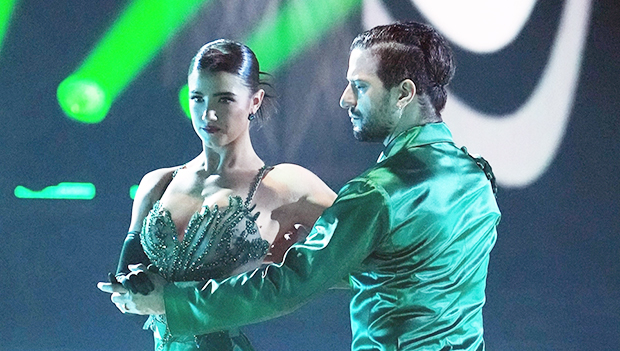 The Dancing With the Stars season 31 semi-finals have arrived, and the competition level is at an all-time high. The final 6 couples will perform twice, and there will be another double elimination at the end of the night. Wayne Brady and Witney Carson kick off the semi-finals with a fierce paso doble to “Beggin’” by Måneskin. Len Goodman, who later announced that he’s leaving the show after season 31, says the “choreography matched the music beautifully well.” Even though there was a “little stumble” at the end, Len thinks it was a “great way” to start the show.

While backstage, Witney announces that she’s pregnant with her second child! “I am so excited to finally announce that Carson, Leo, and myself are expecting baby #2. I’m so blessed. This just felt like a really, really good time to share it,” she says.

Daniel Durant and Britt Stewart hit the ballroom next with their stunning Viennese waltz to “Surprise Yourself” by Jack Garratt. Derek points out Daniel’s “beautiful lines” and “beautiful arms.” Bruno Tonioli calls Daniel “Prince Charming.” He adds, “You were sailing across the dance floor.” Carrie Ann tears up and says “there’s a unity when” Daniel and Britt dance. Len appreciates the mix of steps in and out of hold but admits that “on occasion, it lacked finesse.” Daniel and Britt’s scores: Carrie Ann = 9; Len = 8; Derek = 9; Bruno = 9. Total Score = 35 out of 40.

Shangela and Gleb Savchenko slay with the paso doble to Lady Gaga’s “Edge of Glory.” Bruno is all about Shangela’s “dramatic solo,” but he points out a moment that Shangela missed in the routine. Carrie Ann says the performance was “gorgeous,” and Len says Shangela was “totally committed.” Shangela and Gleb’s scores: Carrie Ann = 9; Len = 9; Derek = 9; Bruno = 9. Total Score = 36 out of 40.

Despite an infected ingrown toenail, Charli D’Amelio dazzles with Mark Ballas in their Viennese waltz to “Glimpse of Us” by Joji. Carrie Ann is in tears. “That was perfection on top of perfection,” she declares. Len is speechless. “That was so good it literally took my breath away. No words of mine can sum up how good I thought that was,” he says. Bruno thinks this is the “best Viennese waltz we’ve seen so far” in DWTS history and compares Charli to a prima ballerina. Charli and Mark’s scores: Carrie Ann = 10; Len = 10; Derek = 10; Bruno = 10. Total Score = 40 out of 40.

Trevor Donovan and Emma Slater bring the heat with their cha cha to “Satisfied” by Galantis ft. MAX. Len comments that it’s “amazing how strong” Trevor has become this season. He says the performance “lacked a bit of rhythm at times.” Derek agrees and says Trevor was a “little flat-footed.” Trevor and Emma’s scores: Carrie Ann = 8; Len = 8; Derek = 8; Bruno = 8. Total Score = 32 out of 40.

Gabby Windey and Val Chmerkovskiy sparkle in the ballroom with their waltz to “I’m Kissing You” by Des’ree. Bruno raves that this routine was “equally beautiful in a different way.” Carrie Ann notes that there was a “feminine softness” to this performance, and it was “real and vulnerable at the same time.” Len tells Gabby that she truly is a “lovely dancer.” Gabby and Val’s scores: Carrie Ann = 10; Len = 10; Derek = 10; Bruno = 10. Total Score = 40 out of 40.

The second round of the night means all-new dances from the semi-finalists. Wayne dedicates his second performance to his mother and starts out singing before seguing into a Viennese waltz to “It’s A Man’s Man’s Man’s World” by James Brown. Len says it was yet another “polished performance.” Derek admits it’s “always such a joy” to watch Wayne dance, and Bruno adds that Wayne is “such a master storyteller.” Wayne and Witney’s scores: Carrie Ann = 10; Len = 9; Derek = 9; Bruno = 9. Total Score = 37 out of 40.

Daniel and Britt take on the samba to “Light It Up (Remix)” by Major Lazer ft. Nyla & Fuse ODG. Derek says he loved all the content in the “fantastic” routine. Bruno tells Daniel that samba is one of the hardest dances, and he “did it very well.” Carrie Ann declares that Daniel has so much “swagger.” Daniel and Britt’s scores: Carrie Ann = 9; Len = 8; Derek = 9; Bruno = 8. Total Score = 34 out of 40.

Shangela and Gleb perform a fabulous Viennese waltz to “I Have Nothing” by Whitney Houston. Carrie Ann raves over how “radiant” Shangela is and says that “routine was straight from the heart.” Shangela and Gleb’s scores: Carrie Ann = 10; Len = 9; Derek = 9; Bruno = 9. Total Score = 37 out of 40.

Trevor and Emma return to the ballroom with a Viennese waltz to “Count On Me” by Judah Kelly, which Trevor dedicates to Emma. Len has enjoyed watching Trevor’s progression this season, but he has a few criticisms for Trevor. Derek points out that the chemistry between Trevor and Emma is “palpable.” Trevor and Emma scores: Carrie Ann = 9; Len = 8; Derek = 8; Bruno = 8. Total Score = 33 out of 40.

The final performance of the night is Gabby and Val’s fierce paso doble to “Malagueña” by Brian Setzer. Carrie Ann yells that this “semi-final is off the chart” and tells Gabby that she’s “never seen you dance with so much ferocity and intensity.” Gabby and Val’s scores: Carrie Ann = 10; Len = 10; Derek = 10; Bruno = 10. Total Score = 40 out of 40.

The semi-final results are in. The first couple heading to the finale is Gabby and Val. Also competing for the mirrorball next week are Charli and Mark, as well as Wayne and Witney. That means the bottom three are Trevor and Emma, Shangela and Gleb, and Daniel and Britt.