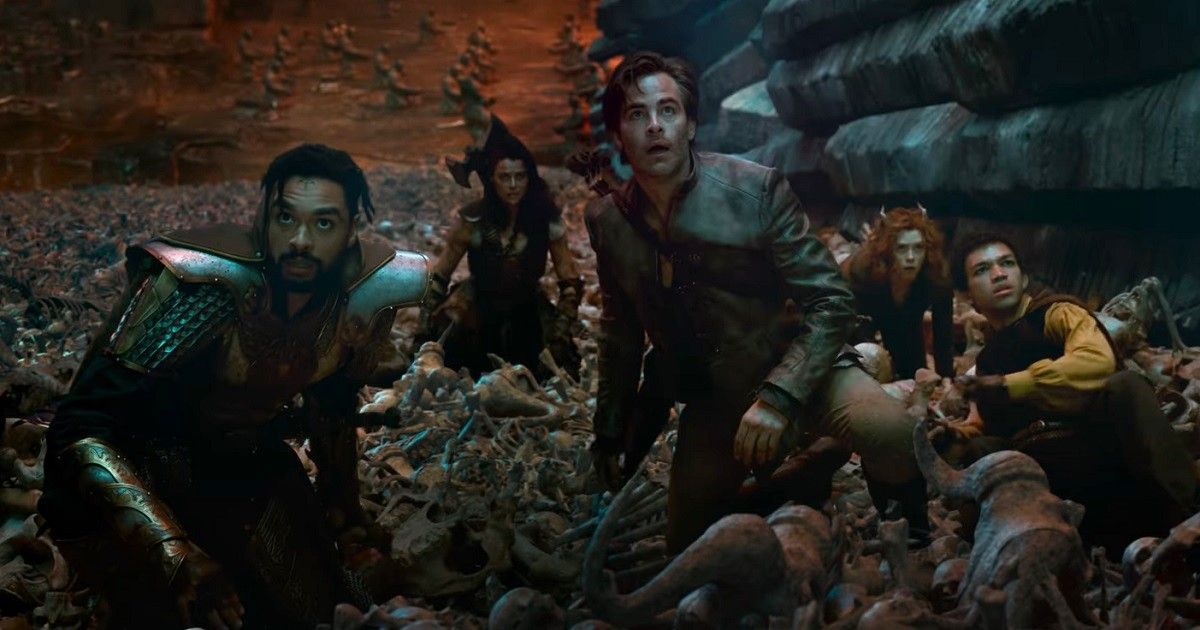 Dungeons & Dragons: Honor Among Thieves latest trailer brings the humor, the heroics, the dungeons, and the dragons.

Let’s get this party started. The latest trailer for the upcoming live action adaptation of the hugely popular table-top game, Dungeons & Dragons: Honor Among Thieves, teases the humor, heroics, and fantastic beasts that will surely delight audiences when the movie lands in theaters in March. Check out the new trailer for Dungeons & Dragons: Honor Among Thieves courtesy of Paramount Pictures below.

Dungeons & Dragons: Honor Among Thieves follows a charming thief and a band of unlikely adventurers as they undertake an epic heist to retrieve a lost relic, but things go dangerously awry when they run afoul of the wrong people. Dungeons & Dragons: Honor Among Thieves brings the rich world and playful spirit of the legendary role playing game to the big screen in a hilarious and action-packed adventure.

This latest footage teases an epic, fun adventure, with the central group exchanging quips and wisecracks whilst battling their way through dungeons, dragons, and all manner of other enemies and beasts. No doubt Dungeons & Dragons: Honor Among Thieves will be jam-packed with Easter eggs and references for fans to spot…and either love or hate.

RELATED: Dungeons & Dragons: Honor Among Thieves Is the D&D Movie We’ve Been Waiting For

Dungeons & Dragons: Honor Among Thieves Will Land in Theaters in March

Co-written and directed by Jonathan Goldstein and John Francis Daley, the filmmaking duo best known for the critically acclaimed 2018 comedy Game Night, Dungeons & Dragons: Honor Among Thieves will see the pair bringing some of that comedy to the fantasy genre. All while striving to get the right tonal balance for a fantasy adventure film.

“To me, it all comes down to tone. Right? I think the tone that you want to hit is that thing where you’re just like, you’re having this fun, fun, fun time, and you’re getting hit in the heart all the time, over and over again, and you see stuff you’ve never seen before,” producer Jeremy Latcham said of the approach to the adaptation. “That’s what these guys do so well. It goes back to me having worked with them on Spider-Man: Homecoming, and reading the first thing I ever read of theirs was just this thing that kind of matched up genres and was hilarious, and heartfelt, and adventurous, and everything else. Knowing that they had that in them and being so thankful to be on this journey with them here to bring this totally huge new world to life. It’s damn exciting.”

Chris Pine (Wonder Woman, Star Trek Beyond) leads the merry band of warriors and misfits as Elgin, a Bard, who possesses an affinity for shredding on a lute. Pine will be supported on this epic quest by the likes of Michelle Rodriguez (the Fast and Furious franchise) as Holga, a Barbarian; Regé-Jean Page (Bridgerton, The Gray Man) as Xenk, a Paladin; Justice Smith (Jurassic World: Fallen Kingdom) as Simon, a Sorcerer; Sophia Lillis (It, It Chapter Two) as Doric, a thieving Druid; and Hugh Grant (The Gentlemen) as Forge Fitzwilliam, a Rogue. The rest of the supporting cast includes Chloe Coleman, Jason Wong, Sophia Eleni, and Daisy Head.

Dungeons & Dragons: Honor Among Thieves is scheduled to be released on March 31, 2023, by Paramount Pictures.

Eli Roth’s BE MINE: A VR Valentine’s Slasher Poster and Trailer Introduce a Unique Viewing Experience