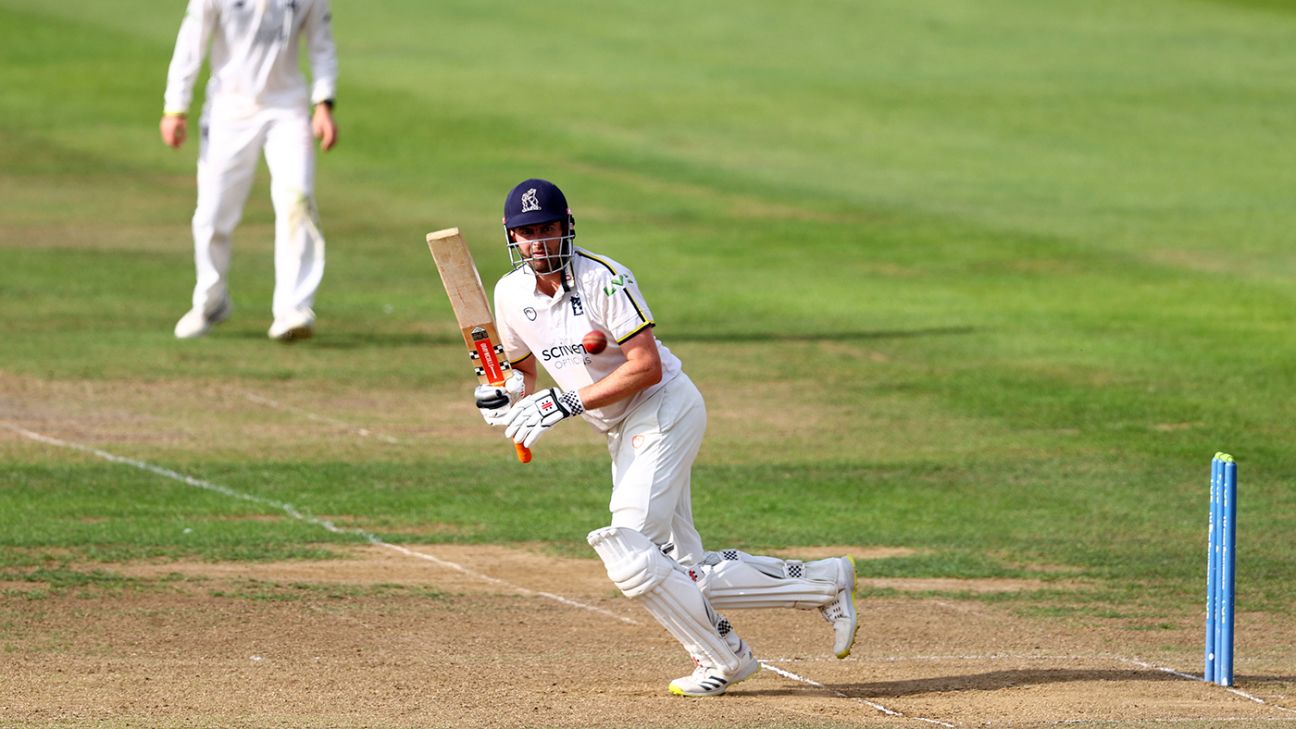 Dom Sibley could have been a guardsman at the funeral of Queen Elizabeth. He has that sense of duty about him. He is an upright sort who knows how to stand perfectly still. He can march in time as the pitch instructs him, never too slowly, never too fast. Indomitable, someone called him, and he was precisely that. Just what you need at a time of crisis.
He reached his third Championship hundred of the season, and 18th of his career, as the light faded, 15 minutes from the close. There was no excess – there had been none throughout the day – merely a workaday clip through wide mid-on against the left-arm spinner Zafar Gohar, the sort of functional shot he can play in his sleep and probably does. Gohar held Gloucestershire together, bowling 32 overs on a pitch offering gentle first-day turn to finish with 4 for 59. They would have been bereft this season without him.

Sibley imagined that Warwickshire, at 255 for 8, had a slight edge. He deserved that thought because he had to work hard for his runs, but Bristol pitches have a tendency to ease.

Sibley does not score hundreds as much as logs them away. It is surprising that he has not made more than 18; a surprise, too, that, he is only 27, because he seems to have been wearing down attacks for a long time. He was dropped off Tom Price on 14 at backward point by the substitute Dom Goodman, a ball that reared at him from a length and brought much discussion and pitch-tapping before the game could resume. As for Goodman, he made a hangdog departure after the over concluded.

Dutiful airs are not really in vogue. As long as the Stokes / McCullum axis holds sway, he appears unlikely to add to his 17 Test caps. He is returning to Surrey at the end of the season to form an opening partnership with Rory Burns: two top-order batters wondering if England opportunities have passed then by. Perhaps London will get him noticed again.

His immediate task is to save Warwickshire from relegation. Champions last season, they lie equal second bottom with Kent with two matches to go. In their final match, they play Hampshire. If Kent pull off a shock win at the Ageas Bowl then at least Hampshire may lose impetus in the final week. So many permutations.

Victory against the bottom club, Gloucestershire, who are virtually relegated, is essential. At 138 for 6, they were in the mire before Danny Briggs, with an adventurous 68 in easing conditions, made far and away his top score of an unproductive summer. Briggs was dropped too, another expensive miss, this time by Jack Taylor at first slip off Ajeet Singh Dale.

How has it come to this for Warwickshire? Perhaps they overachieved in 2021 when they won the Championship, playing a grinding style of cricket in which every player gave no quarter. In the midst of the Covid crisis, it was perhaps a serious mood for its time.

Rob Yates, who made such an impact at the top of the order, is down on runs this season, but the most obvious difference has been in the bowling returns where Oliver Hannon-Dalby is again in credit, but this time with less support, particularly from the former Gloucestershire pair, Liam Norwell and Craig Miles, who have either been injured or out of form. They have won only once, against Essex at Edgbaston – and that was back in mid-April.

We have reached the climax to the Championship with seven of the nine counties harbouring either title ambitions or relegation fears, the chance for the competition to reassert its significance in the fabric of English cricket, except that many think differently these days. The ECB, in its perpetual undermining of the competition over the past generation, has gradually done untold damage. Andrew Strauss will make a pronouncement on Wednesday about his high-performance review. There will doubtless be much talk about the need to serve England’s needs and very little about the need for holistic solutions. There is only one realm to be served these days and it has many foot soldiers.

As September spreads itself, cricket writers of a certain vintage traditionally turn to Keats and trot out the reference to a season of mists and mellow fruitfulness. Quoting Keats’ extolling of autumn during a cost-of living crisis is highly inadvisable, liable only to bring a look of suspicion and advice to put another sweater on.

By the time Sibley had his first towel-down of the day, Surrey were two down. Rob Yates, edging to first slip, and Alex Davies, driving an inswinger, both played with haste, a point that appeared not to be lost upon Sam Hain, who managed only a single in his first 45 balls, deposited Singh Dale for his only boundary and fell in the following over (10 from 74 balls) as an inside-edge to short leg brought Gohar his first wicket.

Sibley and Will Rhodes promised reconstruction. Sibley’s half-century was announced in sonorous tones, but Rhodes fended the next ball, from Tom Price, to his brother Olly at second slip. Sonorous tones were heard again as he crossed the boundary rope and this time there appeared to be the merest undertone of celebration.

But Gloucestershire, not for the first time this season, could not finish the job. Zafar removed Briggs with one that turned, which just left time for a comedic final wicket: Singh Dale, struck by cramp at the end of his run, stretched his left leg uncertainly, ran it gingerly and delivered a wide long hop which Henry Brookes cut straight to third man whereupon Singh Dale fell to the turf, exultant, for further treatment.