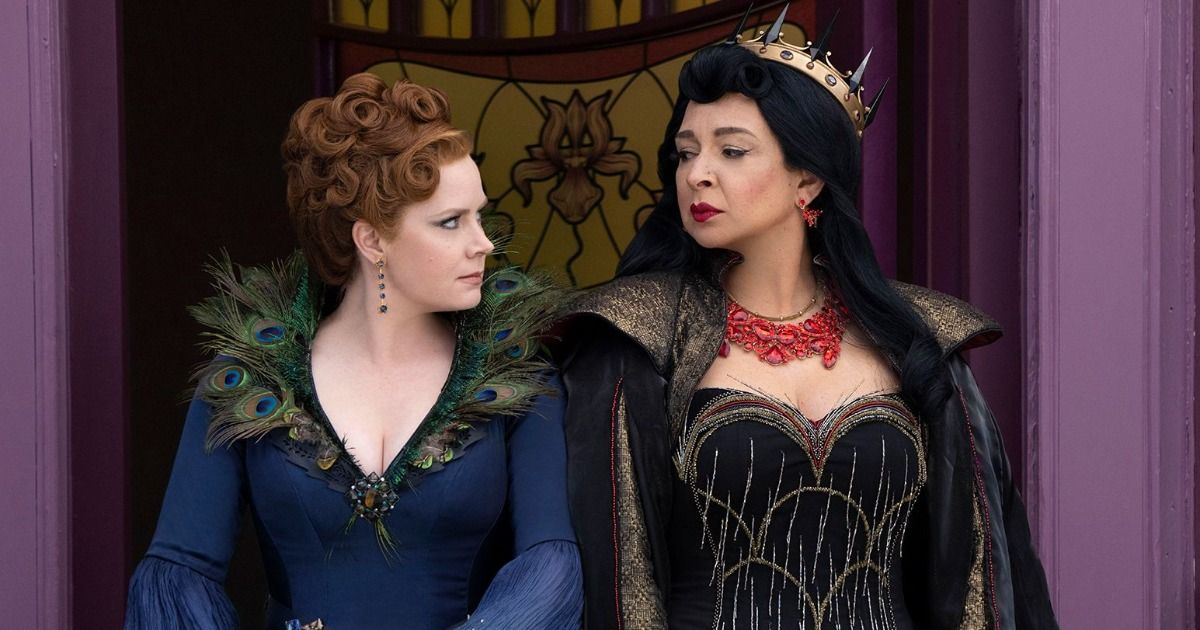 The Disenchanted trailer was released by Disney+ and filled the fans who have been waiting for this sequel for years with nostalgia. The trailer has the essence of the first film since it is full of adventures, music, and magic, but also several plot twists that no one expected. It’s time to break down everything the Disenchanted trailer showed.

Alan Menken and Stephen Schwartz will return as the film’s composers, and Menken will return to compose the score. Adams also serves as a producer on the film, along with Barry Josephson and Barry Sonnenfeld.

In Disenchanted, fifteen years after their happily ever after, Giselle (Amy Adams), Robert (Patrick Dempsey), and Morgan (Gabriella Baldacchino) move into a new house outside of Monroeville. The community is overseen by Malvina Monroe (Maya Rudolph), who has nefarious intentions for the family. When problems arise, Giselle wants her life to be a perfect fairy tale. The spell backfires, with Giselle running to save her family and Andalasia before the clock strikes midnight.

The trailer for Disenchanted is full of nostalgia. Music, dance, and magic are more alive than ever. But, in addition to the return of Giselle, Robert, and Morgan, the trailer brings back some iconic characters like Pip and Nancy (Idina Menzel). In addition, the trailer advances the return of fan-favorite bimbo and the king of shoulder pads, aka Prince Edward (James Marsden).

From what is revealed in the trailer, Edward returns to be Giselle’s best friend and gives her some advice — although not all good — and he doesn’t change a thing, which makes the character continue to have that unique spark that fans fell in love with fifteen years ago.

Related: Disenchanted: Plot, Cast, Release Date and Everything Else We Know

In Enchanted, Nancy decided to leave her whole life and risk an unknown future with Edward in Andalasia, but it will be interesting to see her again in the world she left behind. In Disenchanted, memories of her inner life may flood her, leaving Nancy wondering exactly what her place in the world is.

What she does seem to be clear about in Disenchanted is that she wants to share a life with Edward. In fact, in one scene in the trailer, the two appear to be separated. While Nancy is in the real world, Edward is in Andalasia, although their desire to get back together is noticeable. So whatever they split up for, it’s not something they chose. This leaves in the air the question of why they separated. Edward will most likely help Giselle and Robert find Morgan and defeat the villain.

As for Pip, he is always there to help his best friend, Giselle, no matter what. The Disenchanted trailer promises many adventures in which he will be the key to defeating the true villain of this fairy tale. Hopefully, this time his friends can understand what he says.

The Magic that Disappears when Growing

According to the trailer, Giselle and Robert’s love lives on very much in Disenchanted — so much so that they have a kid. However, not everything will be rosy for Giselle. While her relationship with Robert seems to be going from strength to strength, her relationship with Morgan deteriorated over the years.

While Giselle is still the same sweet and cuddly woman who finds magic in the little things of the mundane world, Morgan is no longer that cute little girl we met in Enchanted. In Disenchanted, she’s all grown up and now a teenager who tests her parents every step of the way. Being defiant is a thing of Morgan’s age, but it will be heartbreaking to see how she stopped believing in magic and fairy tales, especially since that’s what brought her together with Giselle in the first place.

Taking this into account, it’s logical that Giselle tries to cling to how things were in the past, as the trailer shows. Giselle just wants everyone to be happy the way they were before, and there’s nothing better than magic to fix things from scratch. But all goes terribly wrong, at least at first. Maybe Morgan needs to see some magic to keep believing in it.

In Disenchanted, Giselle is the New Evil Queen

The most important and shocking thing that the Disenchanted trailer shows is Giselle as a villain. In fact, at one point, the trailer shows how her expression changes as if she had been faking her tone and her characteristic sweet demeanor. Furthermore, the trailer also shows how Giselle locks up Morgan and throws her into a well without any remorse.

Although the real question is how and why Giselle became quite the evil stepmother. With Queen Narissa gone, it seems that in Disenchanted, another Evil Queen is coming to finish what Narissa started. And the trailer hints at who she is. Malvina Monroe introduces herself to Edward and Giselle as a real estate agent who immediately misses the house they bought. Later, she is dressed in a black dress that is too reminiscent of Queen Narissa, which is no coincidence. Not everything in Giselle’s life is hunky-dory, and Malvina may take advantage of this to spoil Giselle’s well-intentioned spell.

In any case, it will be fascinating to see Morgan meet Andalasia and try to escape from that place and its dangers, in a parallel story to Giselle’s in Enchanted. Also, seeing Giselle as the villain will be unexpected and give Amy Adams a new register to work within the character she played fifteen years ago. In the end, who imagines the sweet and innocent Giselle as the villain and the evil stepmother?