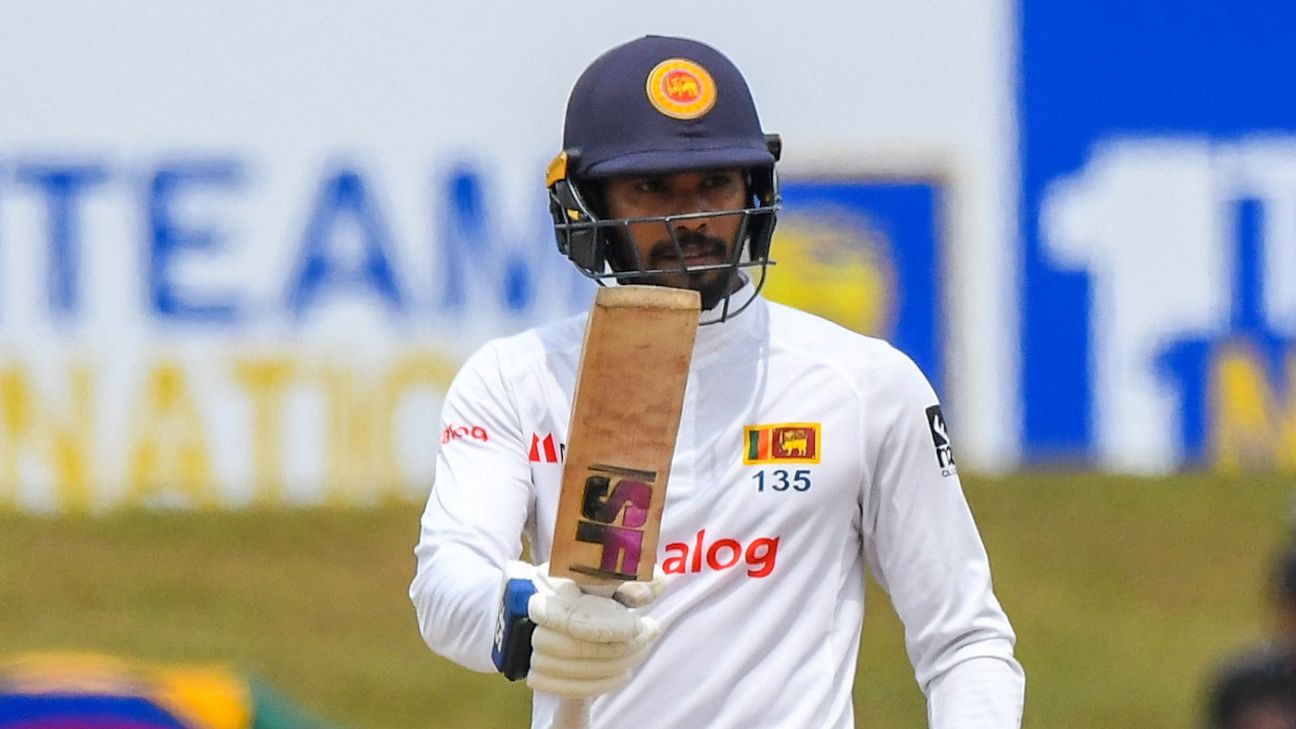 Dhananjaya de Silva completed a ninth Test century, and Ramesh Mendis scored 45 not out off 54 balls, before Sri Lanka finally declared their innings, a little less than 45 minutes into the second session. All up, the pair had put on 82 together off 102 balls. They stretched Sri Lanka’s lead to 507, making victory almost impossible for Pakistan, not merely because of the monumental nature of the target, but because there may not be enough overs left in the game to score that many runs.

De Silva had begun the session on 84, and required only 16 deliveries to get to triple figures. He swept Agha Salman to the fine-leg fence to get into the 90s, carved Mohammad Nawaz past point, then hit the bowler for another sweetly struck boundary in that same region to complete the ton. This was his first century this year, but the celebrations was typically muted.

With Sri Lanka looking to set up a declaration, Mendis began to find the boundary often. He hit Hasan Ali for three successive fours, one through midwicket, one through square leg when Hasan bowled short at him, and then through gully by opening the face on a wider delivery.

A running mix-up cost de Silva his wicket for 109, however. Mendis hit one to Yasir Shah at midwicket and the pair seemed to be taking off for a run. But de Silva was sent back, and Yasir’s direct hit gave de Silva no chance of reclaiming his ground at the non-striker’s end. With the lead now over 500, that dismissal brought the declaration.

Earlier, de Silva pressed Sri Lanka’s lead into truly enormous territory, as the team moved 444 runs ahead by lunch. The centrepiece of Sri Lanka’s innings was the 126-run sixth-wicket stand between de Silva and Dimuth Karunaratne, who battled through a back sprain to 61.
Karunaratne was one of two batters to fall in the session, the other being debutant Dunith Wellalage, both of them to fingerspin. Already, Pakistan would have to break Test records to win this match. However, their chasing down of 342 in the first Test will perhaps prompt conservatism from Sri Lanka, who did not appear ready to declare their innings closed yet. In any case, de Silva will likely be given the chance to complete a hundred, with five sessions still to play.

There was a little luck for de Silva in the second over of the day, when the inside edge off his attempted cut shot against the bowling of Hasan Ali, passed close to his stumps. But although the scoring rate was modest while the quicks (Naseem opened from the other end) were in operation, the runs began to flow more freely when the spinners came on.

This was not before Karunaratne survived a very close lbw shout playing back to Nauman Ali’s first delivery of the day, which turned back sharply from outside off. The umpire’s call on impact saved Karunaratne, who was batting on 42.

De Silva used the sweep to excellent effect, once slogging Yasir over midwicket for four, while Karunaratne used the reverse sweep to access empty space behind point. Largely, though, the batters preferred to use their feet to find the single options. Karunaratne brought up his half-century off the 97th ball he faced; de Silva off his 102nd, two overs later.

Karunaratne was out to Nauman not long after that, though. Having just come down the pitch and lifted him over midwicket for four, he attempted to turn a length delivery square, and ended up only middling the ball to Abdullah Shafique at short square leg, who took an excellent reflex catch low to his left.

Dunith Wellalage did not appear particularly comfortable during his 34-ball stay, and was eventually out edging behind, attempting a reverse sweep of Nawaz. He had not got to near the pitch of that delivery. De Silva continued alongside Ramesh, the last decent bat in Sri Lanka’s lineup.

With the pitch not yet spitting, Pakistan’s bowlers did not build up big periods of pressure in the session. The quicks perhaps, were underused after they had both delivered good early spells. Of the spinners, Nawaz was the tightest again, and the bowler who most frequently beat the bat.