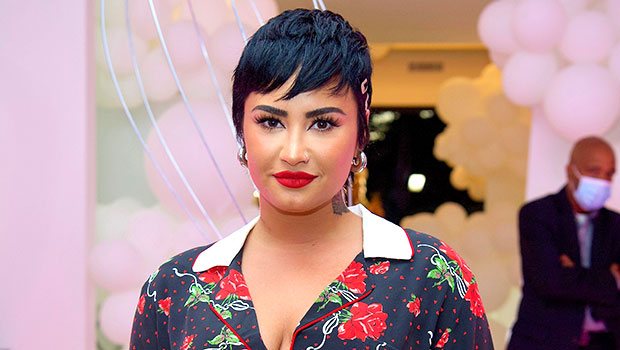 Demi Lovato debuted their new tattoo. The 29-year-old Disney alum, who came out as non-binary in May. 2021 and uses the they/their pronoun, took to Instagram to debut the new ink on Saturday, Jan. 8. They revealed they got a dramatic new spider design on the left side of their skull — just a day after Demi reportedly completed another rehab stint.

In the first photo, Demi’s face is covered with a black face mask as they tilted their head to the side allowing famous tattoo artist Dr. Woo — née Brian Woo — to ink the side of her skull. “Saturday, 2:35 pm,” the Instagram story read. In a follow up video posted 35 minutes later, Demi gave fans a look at their stunning face before turning to the side to reveal a shaved patch of their hair where the spider tattoo could be seen. “By @_dr_woo,” Demi wrote, before begging hairstylist Amber Maynard Bolt to “come fix my hair please.”

Demi has yet to personally confirm reports they completed a rehab stint after declaring they are no longer “California sober” (a term meaning that someone still consumes alcohol and smokes marijuana). The “Cool For The Summer” singer reportedly sought treatment at a Utah facility, and is “doing well” at home per Page Six. The Texas native was last in rehab after they nearly lost their life in an overdose back in 2018, which they spoke openly about in their powerful documentary Dancing With The Devil.

“I no longer support my ‘California sober’ ways,” Demi wrote via Instagram story in December. “Sober sober is the only way to be,” they also said. Around the same time, Demi ditched their mullet and debuted a new buzzcut.