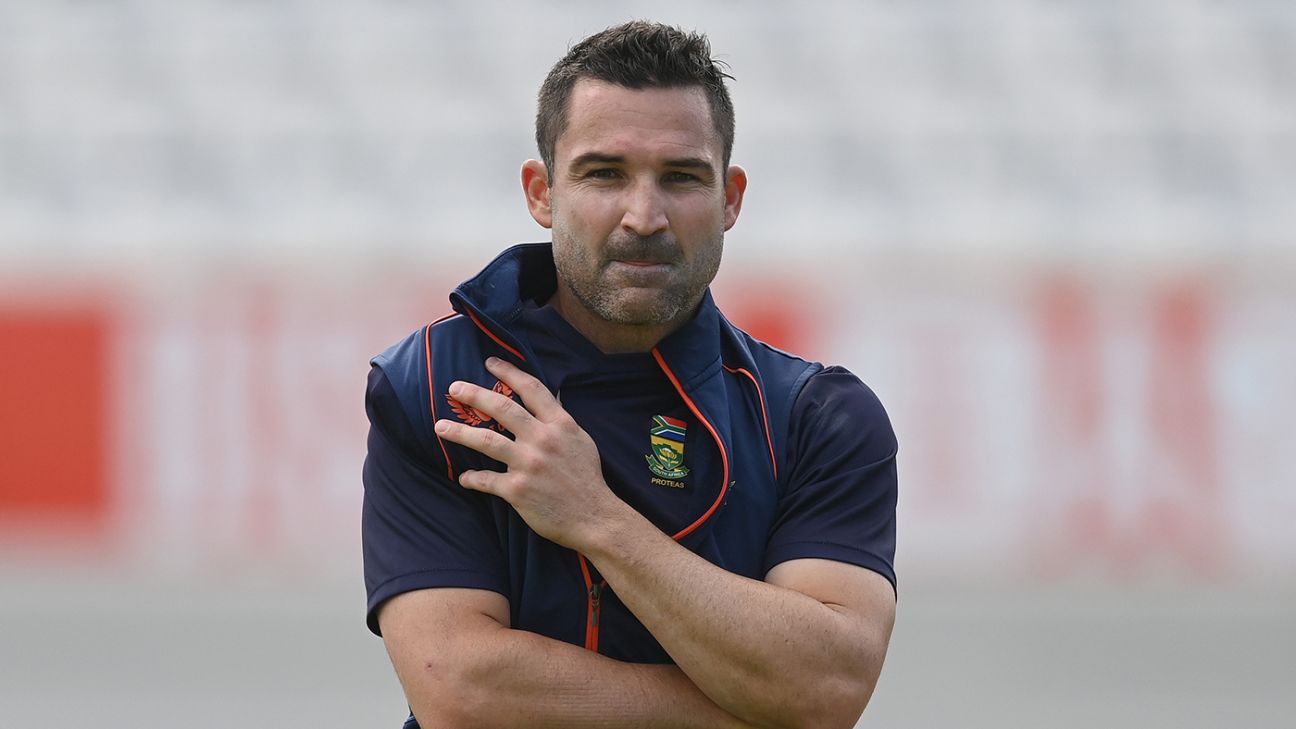 The South African captain was the victim of a hostile throw from his own coach, Mark Boucher, which bounced off the front of his shoulder and hit him on the grille. Elgar was later spotted holding the arm awkwardly with an ice pack to the injured area, and he did not take part in any slip catching. But sources confirm his participation in the decider is not in any doubt. If it was, it would really have hurt as South Africa are still searching for a way to put more runs on the board.

For Petersen, the task ahead is simple in word, albeit tricky in practice. “It’s obvious. We need to score hundreds up top,” he said. “That hasn’t happened for a while now. The batters have to step up now and get a couple of big scores.”

He wouldn’t go as far as to say some of them are playing for their Test places, but with at least one of the reserves certain of a start in Rassie van der Dussen‘s injury-enforced absence, the writing must be close to being on the wall. “I don’t think we want to think that way,” Petersen said. “As an individual you’re probably going to feel that way, but I don’t believe there’s pressure from up top that’s going to make us feel that way.”
Even if van der Dussen had not broken his left index finger in Manchester, his place for The Oval was in doubt. He has gone 13 innings without a half-century and averages 24.17 from his last seven Tests. Either he or Aiden Markram, who averages 15.56 in his last nine Tests, would have had to make way for Ryan Rickelton.
With van der Dussen definitely out, Rickelton seems certain to play but South Africa may see fit to make a double-change, with Markram sitting out for Khaya Zondo. Neither Rickelton nor Zondo have extensive Test experience – Rickelton played two Tests against Bangladesh and Zondo debuted as a Covid-19 substitute in the same series but did not bat – and whoever plays will be under scrutiny from the get-go. But if they are given an opportunity, they’re batting for the bigger picture and the opportunity to make a middle-order spot their own.

Rickleton comes in off a second hot streak of form, both of which South Africa have failed to capitalise on. He scored three hundreds and a ninety in five first-class innings between November 2021 and January 2022 but did not play against New Zealand on South Africa’s February tour despite Petersen missing the tour after he contracted Covid-19. Now, Rickelton has two hundreds and four fifties in eight innings for Northamptonshire on a short-term deal he got by chance but specifically in preparation to play in England.

Rickelton was gearing up for winter training in South Africa when his old school friend Ricardo Vasconcelos asked him if he was interested in a county stint. With the Test tour in mind, Rickelton jumped at the chance and has been in the country since late June, familiarising himself with conditions, specifically the swing. If he can counter that, as Sarel Erwee said in an interview with ESPNcricinfo, that’s a big part of the challenge overcome.

In South Africa, Rickelton is known for his temperament – honed by years of practising in the school nets when his father was sporting director – and ability to build an innings, something no South African batter besides Erwee has done on the tour so far. He has struck the balance between patience and power-hitting and crucially, converts his starts. He has 14 first-class fifties and 12 hundreds. Of Rickleton’s 12 centuries, five are scores of 150-plus. No-one in South Africa’s Test squad has made a score of that significance since Faf du Plessis’ 199 against Sri Lanka in the Boxing Day Test in 2020, 14 Test matches ago.

Petersen puts the lack of big runs down to mindset rather than application, and doesn’t yet have a solution other than showing more resolve. “It’s all mental. I don’t think we’ve struggled to get in. It’s getting starts and getting out, that’s the problem,” he said. “It’s the situation in the middle that you have to prepare for, and you know it’s going to be tough. You have to at least try and fight through that tough period. That’s where you have to challenge yourself mentally all the time. There’s no real process of doing that. It’s just going to happen in the moment.”

That’s also why Zondo may come into the mix. He doesn’t have Rickelton’s recent numbers but more than enough mental resolve after the anguish of non-selection several years before, his testimony at the Social Justice and Nation-Building hearings and his first double-hundred last summer. As a black African batter, Zondo is also a rarity in South African cricket and will recognise the symbolism of his selection and the importance attached to his performances. In some ways, it may create an unfair burden on him, but he has spoken powerfully about issues of discrimination and his commitment to representing what he believes is right.
The final option for South Africa’s line-up is Wiaan Mulder, who joined the squad when van der Dussen was ruled out and adds to their lower-order reserves. Like Rickelton, he has also had good performances in the County Championship, and scored two hundreds and two fifties for Leicestershire in Division Two and is the third-highest run-scorer in the one-day Cup.

Mulder’s place in South Africa’s set-up remains confusing – he hasn’t played a white-ball game in a year, has lost ground to Dwaine Pretorius and Wayne Parnell and did not make the T20 World Cup squad. He played Tests as recently as the Bangladesh series in March-April and then missed out on this squad. With Marco Jansen the preferred allrounder, it’s difficult to see how Mulder will get a more regular run but if the opportunity presents itself, given the form he is in, he’s in a good place to grab it.

With some parts of their XI unsettled, South Africa are not going into the decider in as stable a position as they may like to. Their batting still presents more questions than answers, it’s still scraping along thanks to several small contributions and it has to improve markedly if it’s going to challenge the best bowling attacks in the world.

But it has got them through four series undefeated (West Indies, India, New Zealand and Bangladesh) and is one win (or draw, though South Africa have not drawn a Test since 2017) away from a fifth and it’s as ready as it can be. “This is what we live for as cricketers: series deciders. It’s going to be thrilling,” Petersen said. “There’s a lot on the line for both teams and I think you’re going to get a good game.”