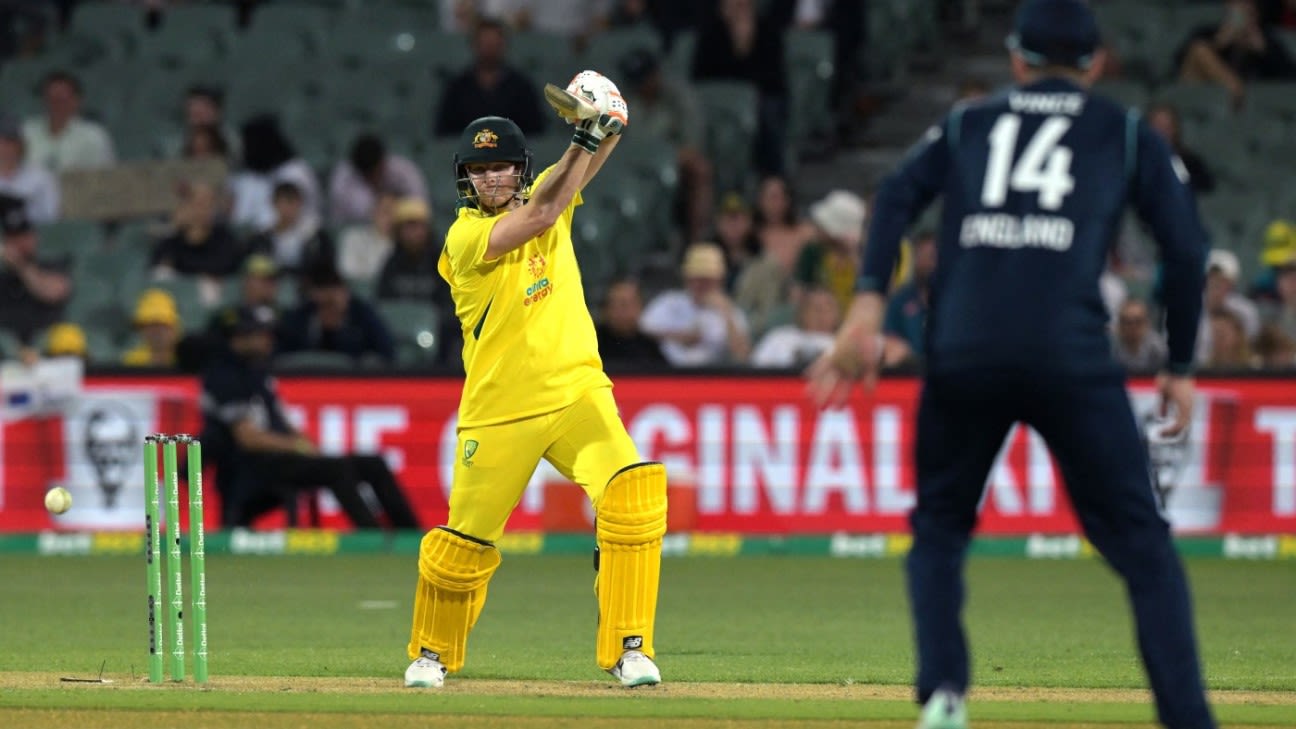 On a flat Adelaide Oval pitch under lights, Australia were never threatened in their chase after a 147-run opening stand from Warner and Head, who made an impressive return to the role vacated by retired Aaron Finch.

Warner and Head pounced on wide deliveries and took a liking to the short square boundaries on a ground where they posted Australia’s ODI record opening stand of 284 against Pakistan in January 2017.

In front of his home faithful, Head further enhanced his growing reputation against the new ball having entered the match averaging 50.07 from 15 previous ODI innings as an opener.

He eyed a third ODI ton but fell for 69 off 57 balls when he holed out in the 20th over. Smith, who was on the fringes for most of the T20 World Cup, then issued a reminder of his prowess in the 50-over format with sweetly-timed strokes coming in at No.3.

Warner seemed headed for his 19th century before his 84-ball knock ended when he was caught on the boundary off David Willey, who in his 61st ODI was England’s most experienced bowler.

Willey then picked up Marnus Labuschagne cheaply to revive England’s faint hopes, but Smith, who recently refined his technique by abandoning shuffling across the crease, slammed the door shut as Australia drew first blood in the three-match series.

Fast bowler Olly Stone, playing his first ODI in four years, started well with his first 10 deliveries all producing dots marked by sharp pace around 145kmh/90mph. But he couldn’t break through as Warner and Head took control.

Left-armer Luke Wood, making his ODI debut, struggled to find the right line with an imperious Smith stroking him for three boundaries in the 26th over.

Just four days after their T20 World Cup triumph, a new-look England had the tough task of refocusing and perhaps inevitably played sluggishly, even though only skipper Jos Buttler, Phil Salt and Chris Jordan had been part of the XI against Pakistan in the final at the MCG.

After being sent in, England slumped to 66 for 4 before Malan’s second ODI century lifted England to what appeared a competitive total. He made a compelling case for a permanent spot in the 50-over team, and gave his own spirits a timely lift too after missing out on England’s T20 World Cup title-winning team following a groin injury.

Malan was particularly aggressive in the middle overs as Malan reverted to T20 mode against Cummins with two brutal sixes on the leg side, while he countered legspinner Adam Zampa with belligerent slog sweeps.

But Malan received little support with Willey the next highest scorer with an unbeaten 34, while Buttler made 29 and unleashed several lusty blows reminiscent of his heroics just a week ago at the same ground against India.

In front of a sparse Adelaide Oval crowd, Cummins enjoyed a strong start to his ODI captaincy with the wickets of Salt and James Vince in a probing new ball spell.

He combined superbly with Mitchell Starc, who bowled sharply to get through opener Jason Roy with a cracker of a delivery in his return with the new ball, after being controversially dropped against Afghanistan in the T20 World Cup.

Australia’s fielding was energetic, highlighted by several superb efforts from Ashton Agar, to start Cummins’ ODI captaincy on a strong note even though their opponents could be forgiven for going through the motions.