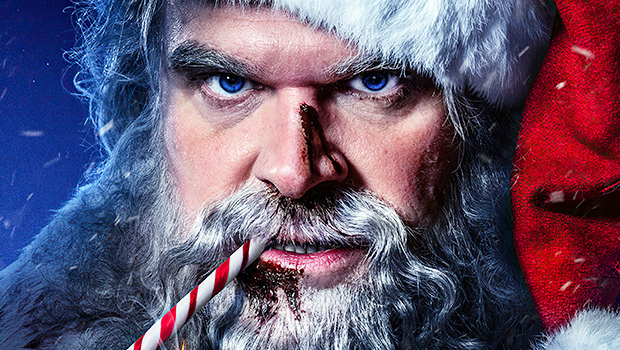 Don’t mess with David Harbour‘s version of Santa Claus. The Stranger Things star plays Father Christmas in the trailer released Wednesday (Oct. 5) for Violent Night, which arrives in theaters Dec. 2. David’s Santa has to save a wealthy family, including their young daughter, who are taken hostage by a group of mercenaries. Prepare to see Santa Claus punch people and explode bombs to save the day in this film.

David’s Santa is innocently drinking a beer during a break from his Christmas deliveries at the start of the trailer. He ends up at the home of a rich family who are held hostage by mercenaries who want the $300 million in their “personal vault.” Santa does not back down from the mercenaries when he confronts them.

“Time for some season’s beatings,” Santa says as he gets a little naughty and fights the mercenaries to protect the family. He’s also able to communicate with the young daughter via a walkie-talkie that her parents bought her as a “direct hotline” to Santa.

The mercenaries are convinced Santa isn’t real, but this Saint Nick is showing these people exactly who they’re messing with. Santa is determined to rescue the family and promises that the mercenaries made his naughty list this year.

Lindsay Lohan’s Christmas Movie: Everything To Know About ‘Falling For Christmas’