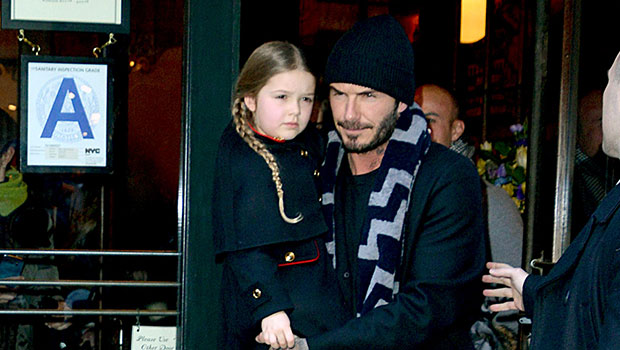 David Beckham spent some daddy and daughter time with his 10-year-old Harper Seven and smooched during a morning stroll in the park.

David Beckham’s, 46, daughter Harper Seven Beckham, 10, is definitely a daddy’s girl. The soccer player captured some adorable snaps of him and his little girl while they were out for a morning stroll. He took a selfie of him and Harper with some beautiful greenery in the background and added a heart emoji to the pic. They were bundled up for the cold as dad wore a baseball cap and jacket while Harper wore adorable grey earmuffs.

In the second pic, David and his daughter locked lips as their eyes bulged comedically at each other. Becks definitely appreciated the quality time he got to spend with his daughter. “Daddy & Princess Leia had a lovely walk this morning,” he captioned the post. How heartwarming to see that the dad of four made time to hang out with his youngest.

The athlete puts in plenty of time with his only daughter and even spent New Year’s Eve with her watching fireworks. He posted a video of the explosion in the sky as he and Harper yelled out, “Happy New Year!” Once again, they shared an adorable smooch in that video as they rang in the new year.

To celebrate her most recent birthday, he posted an adorable black-and-white throwback picture of Harper as a little girl. He held onto the toddler-version of Harper as she wrapped her arms around his neck. “Happy 10th birthday to my pretty lady ❤️ to the girl with the biggest heart and the sweetest smile ❤️ we love you so much big girl ❤️ please stop growing .. Love you,” he captioned the post.

The soccer champion shares Harper with his wife Victoria Beckham. He and the former Spice Girl also have three older sons including Brooklyn, 22, Romeo, 19, and Cruz, 16. David also spends plenty of time with his sons. He recently sported a bold new hair color with his two middle sons. The athlete rocked platinum blonde hair along with Romeo whereas Cruz went for an even bolder look and has died his hair bubblegum pink. David clearly knows how to have fun with all four of his children.