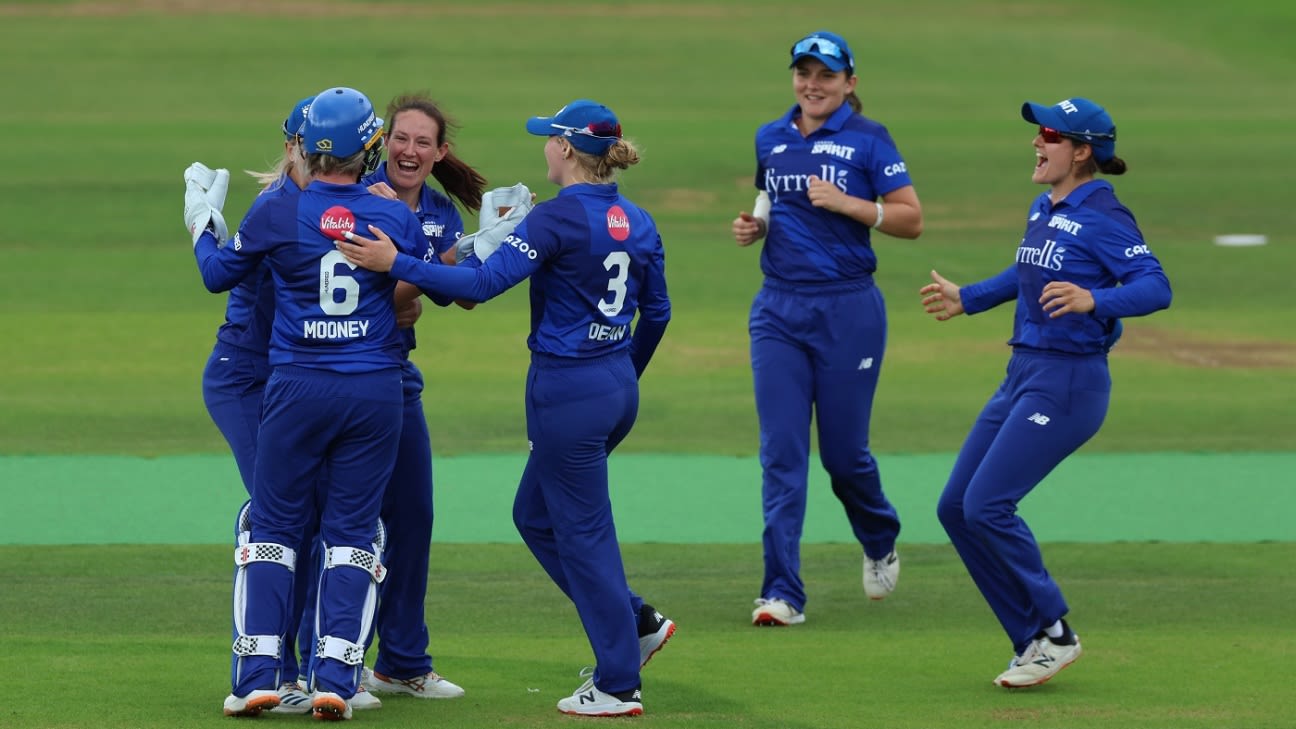 Birmingham Phoenix’s third consecutive defeat saw them crash out of the Hundred at the group stages in a dramatic, low-scoring thriller against London Spirit at Lord’s.

Needing only a point to seal their place in Friday night’s Eliminator at the Ageas Bowl, Phoenix were bowled out for just 82 on a two-paced pitch, with only two batters reaching double figures, before a brilliant start with the ball and in the field saw Spirit collapse to 26 for 6 after 43 balls.

But a crucial, unbroken partnership of 57 off 55 balls between Naomi Dattani and Grace Scrivens dragged them across the line with three balls to spare, knocking Phoenix out and putting Trent Rockets in pole position to sneak through in third.

The result also kept Manchester Originals and Northern Superchargers’ seasons alive ahead of their final group games on Wednesday, but both would need to win by a significant margin against Oval Invincibles and Southern Brave respectively in order to overhaul Rockets on net run rate.

Phoenix fold
Phoenix started the season with three impressive wins, defending 161 and 153 and cantering home in a chase of 117 in between, but their batting line-up has not fired in the second half of the competition, with totals of 106 and 104 in their fourth and fifth matches.

And they suffered another top-order collapse at Lord’s, sliding to 15 for 3 after 22 balls: Sophie Molineux was promoted to open but chipped her third ball to point off Freya Davies, before Megan Schutt struck twice in two balls, bowling Amy Jones with a nip-backer and having Ellyse Perry caught behind.

Sophie Devine looked to rebuild alongside Eve Jones but struggled to get on strike and ended up being run out after a mix-up, and while Jones managed to grind out 24 off 30 balls, Phoenix kept losing regular wickets.
Spirit bowled and fielded brilliantly, epitomised by a relay catch between Dattani and Alice Monaghan to dismiss Emily Arlott, and Phoenix’s 82 all out was the third-lowest total in the women’s Hundred this season.

Devine leads the fightback
Phoenix needed a miracle in the field but Devine, their captain, changed the complexion of the game with two stunning moments in the outfield to leave Spirit 2 for 2 after nine balls. The first, a superb tumbling catch at long-on off Sophie Molineux, saw Danielle Gibson register her fourth duck in six innings this season; the second, a deadeye direct hit at the non-striker’s end, which accounted for Beth Mooney as she charged through for a non-existent single.

Arlott then kept the brakes on with consecutive wicket maidens at the start of her spell, Jones taking a brilliant diving catch running in from deep square leg before Sophie Luff chipped to midwicket.

Spirit captain, Charlie Dean, lost her off stump to Georgia Elwiss and when Monaghan played around Ria Fackrell’s offbreak, the required rate had crept up to a run a ball with only four wickets in hand.

Dattani, Scrivens hold their nerve
Dattani and Scrivens were batting at No. 6 and 8 respectively but are both capable batters: both have opened for Spirit in the past, and they quickly realised that the team’s chances rested on their partnership.

They looked to take the game deep by rotating the strike and running hard between the wickets, and occasional boundaries kept the required rate within touching distance throughout. With 16 needed from 11, Dattani charged down and hit Kirstie Gordon back over her head for four, leaving a dozen needed from the final 10.

They picked up three singles and a two off Arlott’s final set, leaving Molineux to bowl the final set with seven required, but the first ball slipped out at chest heigh and was heaved through midwicket for two. Dattani scampered through for a leg-bye off the free hit, and Scrivens pushed the winning runs down to long-on to send Phoenix out.

“We made it a little bit interesting in the second half, but we got over the line and that’s what counts,” Dattani said. “Me and Scriv [Scrivens] have batted a lot together. We just backed our strengths and reminded each other of what we needed to do: we took it as deep as we could.”